I was clearing out some old boxes.  Getting rid of stuff whose sentimental value had leached slowly away.  Ribbons from the Huntingdon County fair, 1979-80, my old elementary school bookbag, now crumpled and petrified - (There was an odd moment in the mid-70s when the old cloth and leather rucksacks of our parents generation disappeared, and it would take a few years for nylon backpacks to replace them.  So we carried our books to school in a drawstring bag with the school’s mascot upon it.  Now that I’m throwing the bag away, I may never think of it again . . . ); a collapsible binoculars that I thought was pretty cool back when; college arts mags that I wasn’t in; Mad Magazines from the 70’s, and so on.

Other things go back in the box to keep until the rest of their sentimental value leaches away.  A stack of letters from my first girlfriend, when I was 15 and we lived an insurmountable hundred miles apart; drawings and writings; letters from other friends and later girlfriends; old photography marred by a poor mastery of the darkroom.

And a random collection of journals and notebooks.  In one of my first attempts - or at least earliest surviving - I kept a journal for the month of May in 1975 – when I was ten – and though it has nothing much to say about my inner states – it’s an odd glance into the habits of daily life that I would otherwise have no consistent recollection of.  Here is a trio of entries from this 4th-grader, of 41 years ago (misspellings and all):

Thursday, May 1, 1975
I got up late at about 7:45.  We traded trapping cards.  I had 5 – now I have 21.  In Library I got Cave 4 and Bone People.  Bryan Carnathon ate 25 cups of cranberry sauce at lunch.  In reading I only have one story left until I’m done.  I played kickball at recess.  By then the rain had stopped.  After school I started Dad’s birthday present.  It’s a soap carving.  Then I went downstairs and built a tower of blocks.  Right now I think my sister is getting sick.  Right now she has diaria.  So Christy is sleeping with me.

Friday, May 2, 1975
I got up in the morning at 6:00. I got trapped to 22.  I got 100 on a paper in Social Studys.  I played kickball during recess. James Ross gave us all a blow pop.  I finished my last story in Reading today.  We played the princapal in gym and the two teachers and lost.  Then we picked up teams and our team won in volleyball.  After school I started the second present – is a pencil holder.  Jeff Krushinski came home with Ronnie.  We played a few games of baseball.  Then we spied on the little kids for a little while.  Then me and Ronnie played a little badmitten.  When I came in I noticed Dad’s Birthday Cake that Christy and Cathy made. It’s iceing was like water and it was running off the cake.  It was marshmellow so it stuck to everything.  But we ate the cake anyhow.  I gave Dad the soap carving and pencil holder.  Then we watched Chico and the Man and Hot L Baltimore. Then I went to bed.  Christy isn’t sleeping with me tonight because Cathy’s feeling much better.

Saturday, May 3, 1975
I got up and watched 1 hour of TV.  At about 11:00 I went outside – couldn’t find any.  Chucky was down at the shoe store.  I couldn’t find Ronnie, Scott or Tommy.  So I came home and tried to call Neal, but he was in the middle of a baseball game.  I decided to go to Staffer’s (a store).  On the way I found Ronnie, Scott and Tommy working on a go-cart.  They went up to ask if they could go too.  When I got back we worked on the go-cart.  Then I played badmitten – then we had some batting practice. After that we played some football.  Then I came in and cleared the table and went to bed.  Then I got up to watch Mary Tyler Moore.

Entries like these, and the letters – which are half of a conversation about events long forgotten – make me feel like I've led multiple lives.  That this me - of today - isn't the only me I've gotten to be.

Reincarnation is real - it just happens so gradually that we don't notice it right away. 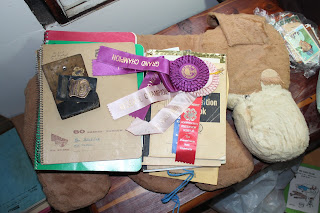