Monica, on her mother's side has 15 aunts and uncles - on her father's side even more.  Her maternal grandmother alone had 9 brothers and sisters, and the number of great aunts and great uncles and their descendants (her parents' cousins) is uncountable.  Still, even with vigorous colonies in Florida, California, New York and elsewhere, the family epicenter is Medellin.

So, too, it was the base of our visit.  One of Esperanza's cousins lent us her apartment for our stay, and the Tias Angel, (pronounced "AHN-hel") where Esperanza has been staying - looked after us.  We traveled outside of the city, but always circled back to Medellin. 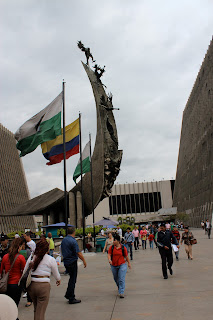 This city of over 3 million people, is strung along the center of the Aburra Valley, about 5,000 feet above sea level within one of the northernmost strands of the Andes.  It has the usual Latin American urban problems -- poor barrios of displaced people, pollution, traffic and crime, as well as a few extra ones, like its recent history as a staging ground for international drug mafias and gang violence.  But it is also a city anxious to put that notoriety behind it, to make the worst barrios livable, and to give its middle class a world-class city to be proud of.


The sprawling family is built of engineers, doctors, bureaucrats - though memories of days as plantation owners still echo. 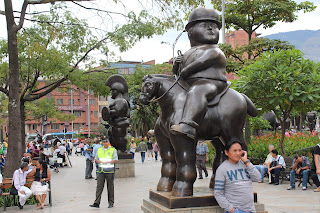 It's not that family members are wealthy - except in comparison to the comunas, but we saw the city mostly from that class elevation.  There are places not to go, because they've been ruined, and places to go because they showed the culture of Antioquia or they were clean and modern like the new metro. 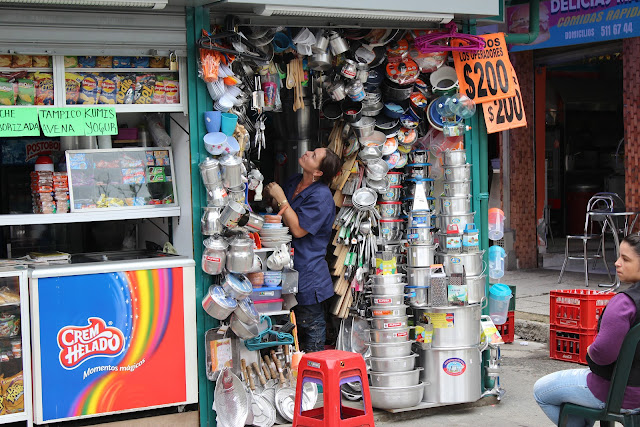 The city is filled by their memories and their landmarks, although it has long since grown beyond them. 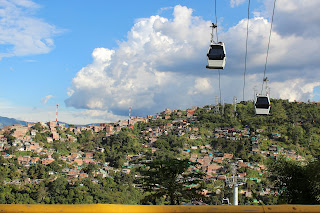 One day, with cousins, we took the Metrocable up over the barrios to Parque Arvi.  As we passed over the hillside barrios, you could see how they accrete like coral.  The newest dwellings hodge podge and a single story with roofs of tin held down with rocks or bricks.  In the oldest neighborhoods the buildings have acquired 3rd and 4th stories, and the pragmatic city had laced in sidewalks and schools and paved the roads for fleets of creeping buses, motorcycles and pushcarts. 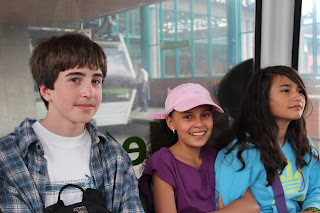 On our way down, as we passed above the barrios and Saturday evening got underway below, there was the thousand sounds of humans - talking, shouting, laughing, selling.  People out and about as though they didn't have television to keep them inside.  Kids flew kites from the rooftops and more than one decorated the cables upon which the gondolas run. 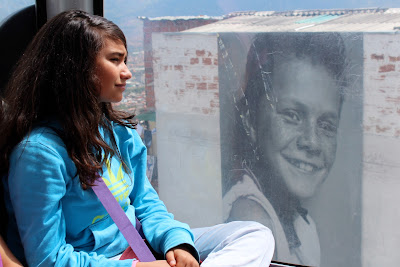 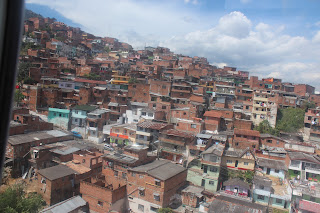 Posted by Andy Brown at 8:35 PM No comments: