_
Good news for the bees!  Europe has banned the use of neonicotinoid pesticides for two years until scientists can show that they are not the culprit behind the collapse of the bee population.  In the US, of course, research into pesticides has been mostly out-sourced to the companies themselves, and although they are obligated to do actual science, they have little incentive to be aggressive or thorough about it.

Worldwide sales of the pesticides total in the billions of dollars. Two companies that make them in Europe, the German giant Bayer CropScience and Syngenta, a Swiss biochemical company, have said they were willing to finance additional research, but that the current data do not justify a ban.

In the US the EPA was willing to sit on its hands and wait to see if any scientific insights spontaneously developed or whether bees would recover or go extinct.  I have a feeling a ban in Europe will tend to stimulate a greater sense of urgency for the chemical companies and their agricultural clients.  If they think their product is truly safe, then I think they'll want to settle the question sooner rather than later.  If they suspect their product is an epic environmental disaster and they were hoping to kick the day of reckoning down the road, then I expect nothing but lobbying and complaining from them.


Europe’s struggle with the question of neonicotinoids and bee health is being closely watched in the United States, where the pesticides are in wide use, and where a bee die-off over the past winter appears to have been one of the worst ever. Beekeepers and environmentalists are suing the Environmental Protection Agency over its approval of the products, which they claim were allowed on the market with inadequate review.

Bees are in short supply.  The Rhode Island Beekeepers Association couldn't fill the orders of everyone who wanted to purchase queens this spring.   I was fortunate to order early and eventually got the three colonies that I ordered.  Two seem to be successfully installed, and the third I'll check on in a few days to see if the queen has been accepted yet.

Now I just have to figure out how to keep them alive until the EPA stirs itself to life.

In this morning's dawn chorus I heard the towhee's drink-your-tea for the first time this spring.  No frost this morning of the 23rd, but frost struck the two nights before - hard enough to kill a couple of tomato plants I'd set out.  Maybe this will be the last one.

And the peach sapling is in bloom.
_
Posted by Andy Brown at 2:12 PM No comments:

The herb garden bird bath is frozen this morning. 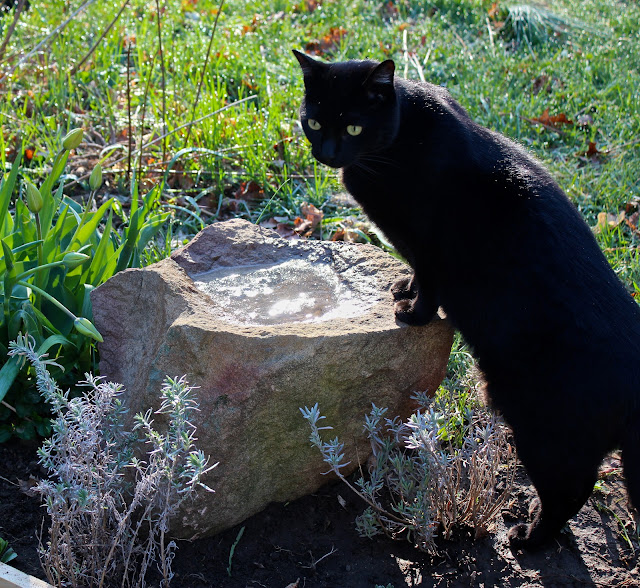 Posted by Andy Brown at 8:38 AM No comments:

_
At work we've been engaged in a lot of advocacy on low-wage work, which is becoming the economic model for more and more of the US economy.  The progressive in me finds it outrageous and heartbreaking the way that wealthy corporations and billionaires, in collusion with a co-opted media and corrupt political class, have systematically destroyed first the working class and then the middle class of this country.  It's all fairly straightforward, however they may try to dress it up with economic theory, political theater, media doublespeak, and individual rationalization: an exercise in raw power to steal more and more away from the lives of average Americans in order to draw more toward themselves.

(From a personal standpoint, at least, my outrage is made less corrosive by a lack of envy.  The amount of self-delusion and anti-humanity necessary to be a CEO or billionaire in this world seems a kind of pitiful little hell - even though they remain oblivious to it.)  Still, the pain they cause is very real, and people do suffer and die because of it. 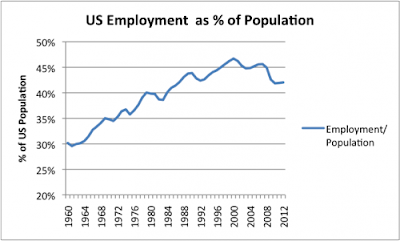 On the one hand, the plunge from the year 2000 to today represents tens of millions of people ejected from the workforce against their will, and a crash in what workers can insist on in a "weak labor market."  This has been devastating to families and local economies.  On the other hand, it also represents a statistical return to the mid-eighties.  The mid-eighties weren't a time of economic distress - in fact times were pretty good.  But the percentage of people earning wages was lower. Not all teens were declaring taxable income (though many of them might have been mowing lawns or shoveling snow, and the old Mom and Pop businesses made use of their family members); there were more women who were occupied in the domestic economy rather than earning a wage and outsourcing that work (to food companies, etc.); more elders were retired, being grandparents, serving as unpaid caregivers, and so on.

There are better economies that can be built that don't entail half the US population trading their hours for wages.  And there are better lives that can be built when more people disengage from these wage-payers, who increasingly are heartless mega-corporations who mean none of us well.  A service economy of low-wage workers is a rat eating its own tail.  If the downward trend on this chart can mean we stop slaving for them and start working for each other again -- then I have to say, I'm all for it.

It's going to be painful, but as the doomers say, "collapse now and avoid the rush."
_

Posted by Andy Brown at 8:36 PM No comments:

_
The violets have been out for a few days.  Last night I made a couple of little salads for Monica and I with violet flowers, dandelion, wild sorrel, and some young dock leaves.  It satisfied a craving for green.

Though some non-native plants have come into flower (forsythia, daffodils, a couple of dandelions, and chickweed) the only native bloom other than violets I've seen is one of the bleeding hearts under the black maple which is just in process of opening a bud.
_
Posted by Andy Brown at 8:39 PM No comments:

_
In Georgia last week it was cold where they raise the bees and so the virgin queens stayed home and didn't take their mating flights - (they call them virgin queens rather than princesses).  And what you are buying when you buy a "package" is a mated queen with enough random worker bees to help her raise her first wave of brood.  But the cold weather meant a shortage, and although I'd ordered three packages, I could only pick up the two.

On Saturday I installed the bees in the waiting hives -- each queen in a tiny cage with a few attendants.  If you let her out too soon the confused worker bees will kill her.  So the entry to the cage is plugged with a candy paste.  By the time the bees eat through it, a matter of a few days, they've adopted the young queen as their own, and she sets about laying her eggs in the new comb.

I checked on the hives today, and shook the bees off the cage in the first hive.   The queen was not yet freed, so I undid the cork and let her out to disappear into the swarm.  She has a bright red spot of paint upon her.  In a few days I'll look for her or at least look for signs of eggs.  That will mean we are launched.

In the other hive the queen and her attendant were dead, still inside the cage.  No idea why she failed, though it happens.  I may be able replace her if I can secure a mated queen in the next few days.  It becomes a race against time.  The bees, queenless, may drift next door to the other hive.  Even if they stay put, the clock is ticking on these worker bees.  They only live for six weeks, and already it is nearly a week since they were packaged in Georgia.  Another few days to get a replacement; another few days in the cage before they will accept her; and only then will she begin to lay eggs for a replacement generation.  How many of the workers will survive over the following weeks to nurture the larvae to be nurses for the expanding brood chamber?  Even when things go well, the population reaches a nadir in the transition from the dying original workers to the queen's new offspring.  This delay makes that nadir all the deeper and more precarious.
_
Posted by Andy Brown at 8:03 PM No comments:

Email ThisBlogThis!Share to TwitterShare to FacebookShare to Pinterest
Labels: bees 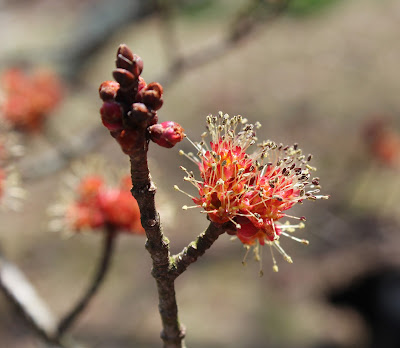 The bees arrive on Saturday.

The maple trees have been making pollen.

I took a little brown tree frog away from the cats. 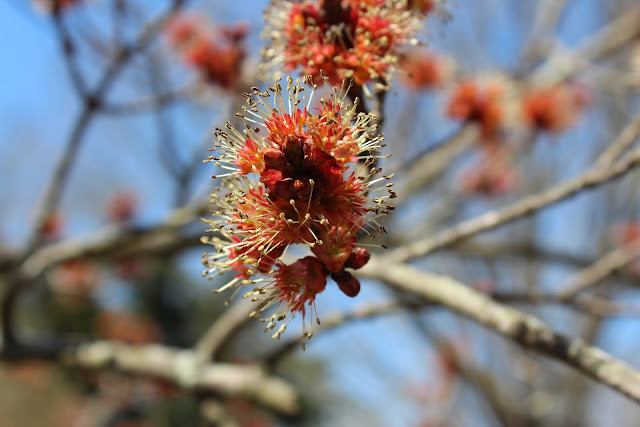 Posted by Andy Brown at 8:16 PM No comments:

_
They say that the best time to plant a tree is twenty years ago.  But since I didn't, I planted some today.  The only fruit trees that came with our property were a few quince thickets and a sun-starved crabapple.  (Though we continue to benefit from Vernon and Edith's asparagus bed, raspberry patch and rhubarb.)  A few years ago I planted a Saturn peach and Jonathan apple.  Then a Macoun apple, a couple of cherry trees (one since badly trimmed by the deer), a black walnut, and I've nurtured a volunteer mulberry tree.  Today I planted a stand of hybrid plum (seven saplings planted so their branches will intermingle), a Dolgo crabapple, and a witch hazel.  Still waiting for their place are another crabapple, three elderberries and a shagbark hickory.  If the hickory survives the deer and rabbits, it should produce nuts around 2053, well before my ninetieth birthday.  So there's that.
_
Posted by Andy Brown at 8:56 PM 1 comment:

Email ThisBlogThis!Share to TwitterShare to FacebookShare to Pinterest
Labels: food, garden, outdoors
Newer Posts Older Posts Home
Subscribe to: Posts (Atom)
Do I contradict myself?
Very well then I contradict myself,
(I am large, I contain multitudes.)
----  Walt Whitman
"Song of Myself"