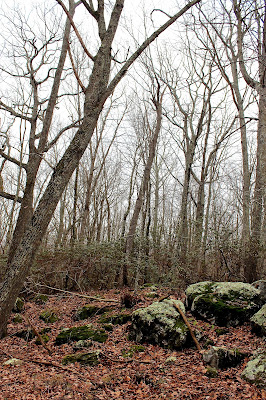 Nico is playing The Mathmagician in his school's musical production of The Phantom Tollbooth, and they had a lengthy rehearsal on Sunday.

After I dropped him off at the school, I drove further into Connecticut to hike along Oswegatchie Hill.  There is a nature reserve with trails and a long stretch of woodland upon a broad ledge between granite outcroppings and the estuary of the Niantic River.

Sunday was cold and overcast and the forest was silent.  During my hike, I neither saw nor heard so much as a titmouse, only the occasional cry of distant gulls.

First I walked north through woods of oak, beech and hickory and an understory of evergreen mountain laurel.  The white posts of perc testing reminded me that conservationists have been in a struggle for many years to prevent this bit of coastline from being developed into million dollar homes.

Normally as I hike the gloves and hat soon come off, but the still, damp air was strangely biting.  I hiked up into the preserve to an old rock quarry.

Water was spreading down the gently sloping rock face, some of it frozen in a thin, translucent icy crust.  Beneath the crust ameboid water bodies meandered down the slope, darkly visible beneath the ice.  Their wobbly forms trailed little tails like tadpoles or spermatozoa or slid down as globules, forming and reforming.  They divided and merged and split along different streams, emerging from under the ice as mere water, before gathering themselves back into new metamorphoses under the next sheath of ice.

I stood for a long time watching this and other dances of ice and water.

The astrologers say I'm a water creature (Pisces, Scorpio rising).  The idea of celestial bodies influencing our lives strikes me as preposterous, but I'm open to the idea that great wisdom is contained in traditional containers like the Zodiac, the Tarot, the I Ching, the Bible and so on.  In any case, I don't mind being called a water creature.  I identify with the mutability and power of water more than the other elements.

Eventually, I pulled myself away from the water and headed back to the car.  I had 6 dollars remaining on a gift card to the Book Barn in Niantic that my friend Charles had given me two years ago.  That together with the $2.16 cents in the car's change drawer would get me a couple of books to read in case I had to wait for Nico to get out of his rehearsal.

Email ThisBlogThis!Share to TwitterShare to FacebookShare to Pinterest
Labels: hiking, magic, musings, Nico, outdoors, photos
Newer Posts Older Posts Home
Subscribe to: Posts (Atom)
Do I contradict myself?
Very well then I contradict myself,
(I am large, I contain multitudes.)
----  Walt Whitman
"Song of Myself"