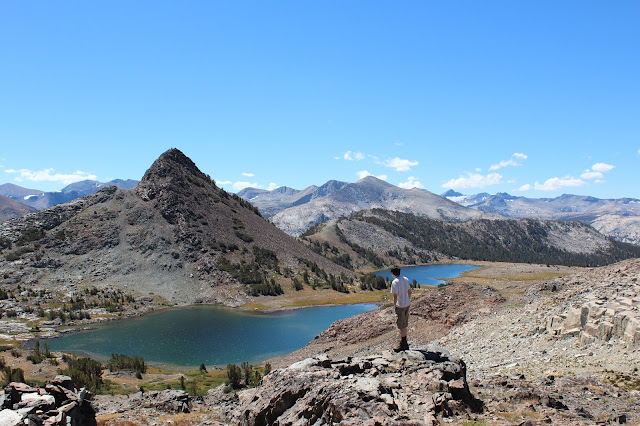 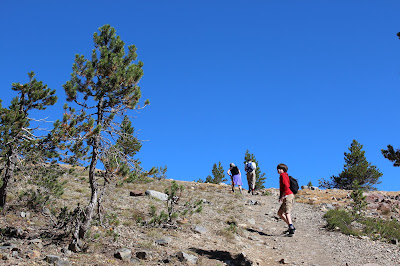 On Monday the 19th we left Glendale - where we'd been spending the weekend with Monica's father and sister Anna.  We drove north along the eastern side of the Sierra Nevada mountains.  I've never seen it so free of snow.

On Tuesday, we took the Tioga Pass up to Tuolumne Meadows.  The highway, which is closed by snow most of the year, climbs and twists 3,000 feet up a great gorge of naked granite.  It crests at 9,934 feet on the eastern entrance to Yosemite National Park where it reaches a valley of open meadows and lakes.

But we were anxious to get even higher and we climbed the ridge to the Gaylor Lakes.  (We were soon wheezing and gasping in the thin air.)  A young mule deer placidly ignored us, grazing beneath the pines along the trail. 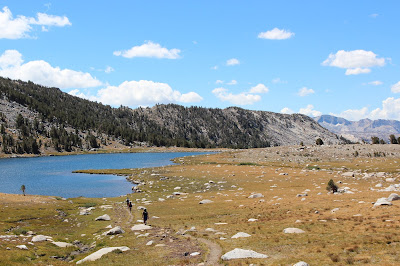 Beyond the crest of the ridge is a valley with a pair of beautiful blue lakes.  An osprey was cruising above.

The granite mountaintops range all around, and the meadows, even in parched August are filled with wildflowers -- ground lupines, paintbrushes, gentian, daisies, asters.

The watercourse between the lakes was dry -- brown-stained rocks. A tiny frog hopped there.  A troupe of rangers was digging up the trail that wound along it -- laying in a substratum of rock under the trenched meadow humus. 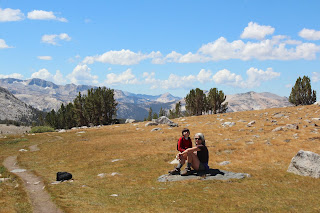 Above the work crew, chipmunks and ground squirrels were active in the rocks along the trail.  Yellow-bellied marmots kept their distance.  Titmice and warblers stayed close to the clumps of trees and shrubs - and disappeared entirely as a peregrine falcon flew past.

Tart currants could be plucked from under the shrubs, and bumblebees were busy in a greenish-yellow thistle blossom that was splayed close to the ground.

At the top of the hike, above the upper lake are the ruins of a mining settlement - the Great Sierra Mines.  A handful of stone hovels and storehouses - only one of which still boasted a stone and timber roof.

And at about 10,800 feet the Sierras stretch out before you.

There were rumors among the hikers that fires were out of control along the western slopes,  but no smoke had blown into the High Sierras at this point.  Our only concern were the thunderstorms that were springing up every afternoon.

Email ThisBlogThis!Share to TwitterShare to FacebookShare to Pinterest
Labels: hiking, Monica, Nico, outdoors, photos, Porter, travel
Newer Posts Older Posts Home
Subscribe to: Posts (Atom)
Do I contradict myself?
Very well then I contradict myself,
(I am large, I contain multitudes.)
----  Walt Whitman
"Song of Myself"