Though I'd tallied nine stings, more welts continued to materialize here and there, until there were twenty or so. That takes a toll on a body and I was pretty reluctant to go out and get stung some more.  It's no good for the bees either.  With a knife I scraped 40 or so stingers out of the apron Monica had lent me, and another 20 from the pants.  My socks were so hopelessly tangled with barbs that I just threw them away.  And for every stinger, a dead bee somewhere. 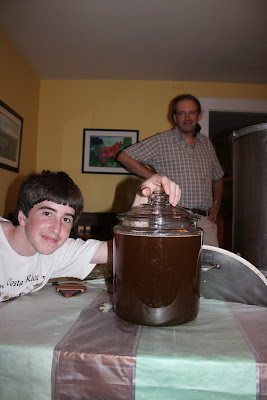 Saturday evening, I looked at Youtube videos -- disregarding the elderly beekeepers, gloveless and in shirtsleeves with their placid hives, and gravitated toward the suited-up folks youngsters diligently jetting smoke between each frame; re-learned the technique of striking the full frames hard on a stone to dislodge the bees onto the ground (rather than using the bee brush to turn them into an airborne cloud of stingy anger).  I learned the importance of having a container at hand to stash the frames, so the bees aren't swarming around the combs to steal back the honey.   I talked to an old beekeeper and learned that bees do indeed get irascible before a storm.  In short, I did what I should have done Saturday morning.


I suited up with boots and winter gaiters and flannel-lined pants, two shirts, a veil and gloves.  I practiced with the smoker until I could keep it going.  I took out the old Coleman ice chest we keep "forgetting" to give back to my parents.  And then, diligently jetting smoke between every hive body and every frame, I took out 17 frames of capped honey to go along with the four I'd taken yesterday.  There was more in the boxes, but not all fully capped with wax, and I didn't want to strip the colonies bare and have to feed them sugar.  Most importantly, there were no stings and not a barb to be found upon my armor. 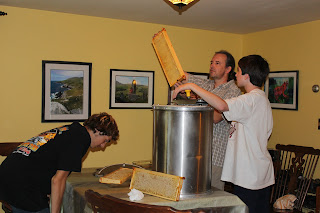 Porter and Jake were fascinated with the extractor, and the heavy frames of honeycomb, and they were a huge help with the process of spinning and draining off the honey.  I had a big glass jar, about a gallon and a half or two gallons, that I thought I would use and see if I could get it close to full.  But the first six frames filled it. We ended up pulling over 5 gallons of honey (about 55 pounds) by the end.  It's a pretty good haul from 3 first-year colonies.


I sent Jake home with a couple of pints of honey, for his help,

and I think I know what I'm giving people for Christmas this year. . .

Email ThisBlogThis!Share to TwitterShare to FacebookShare to Pinterest
Labels: bees, food, photos, Porter
Newer Posts Older Posts Home
Subscribe to: Posts (Atom)
Do I contradict myself?
Very well then I contradict myself,
(I am large, I contain multitudes.)
----  Walt Whitman
"Song of Myself"