_
The stock market took another stumble downward yesterday.  The press attributed it to a struggling global economy and especially the "debt crisis" in Europe.  But there is an idea that is being seriously discussed in parts of the blogosphere, but which gets no mention in any mainstream press at all.  The idea is that the world economic system as we know it is about to violently shake apart, because it is absolutely not designed to survive a contraction in the Global Economy.
Most people don't understand that economic growth is not just a happy by-product of our current capitalistic system, it is the crucial underlying ingredient.  To the extent that any of our wealth is counted in dollars or yen or euros - as opposed to beans or goats or clean shirts - the "value" is only and solely determined by what other people are willing to believe it is worth.  So far, fine, that's basic market economics.  But we have taken things one step further and built our economy of value on what we think things are going to be worth in the future.  If we think there is going to be more wealth in the future, then it makes sense to invest your money in something that will return your capital plus a bonus - or if there isn't a clear investment opportunity handy, to lend it to someone who can invest it.  You eventually get back your capital plus a bonus.  In fact those loans themselves, that empty spot in your wallet, since they are supposed to gather the bonus to itself, become valuable things themselves, to be sold or used as collateral to borrow more money to create more debt, more bets on the future.
However, if there is no growth, if there is stagnation or contraction, then those interest-accruing debts become burdens, whose value is shrinking rather than growing.  Investments become losses.   A stock market loss of 5% means that trillions of dollars in wealth that people thought they had - just vanished.  Next week trillions more may disappear.
The main difference between the mass media and the blogosphere is that the mass media (which are all embedded in vast multi-national corporations wedded to the status quo) speak as though perpetual economic growth can be regained and sustained.  In the blogosphere you hear serious and well-articulated doubts.  Many economists and environmentalists have tried for decades to point out that our system wasn't sustainable over the long term - that physical and environmental limits (or just incompetence) would eventually bring growth to an end.


But the coming decline in fossil fuel accessibility could itself bring an end to growth.  So to could the disruptions of climate destabilization or the acidification of the oceans.  Even an expansion of unrest among the poor and dispossessed of the world could be enough to put an end to growth.  Because, when the fall of global finance happens, a vast amount of imagined wealth is going to go with it - and people are not going to have the things they thought they did.
_
Posted by Andy Brown at 7:21 PM No comments:

_
Mosquitoes have been rare this dryish Autumn.  Maybe they are around, but harried by the bats, swifts, dragonflies, swallows, robber flies and so on that dive and zig through the airspace.  And then there are the frogs, toads and snakes that hunt in the grass.


It is grasshoppers, katydids and their kin seem to be ascendant at the moment.  I saw the garden spider among the herbs binding a good-sized brown one, but that can't put a dent in the population - (nor will the blister beetles at least for now) - and besides I think the wasps have been thinning out the spiders.  A few years ago I found coyote scat in the yard and it was entirely the casings of grasshoppers.  I hear the coyotes in the night, and something has been making off with the mouse carcasses we toss out, so maybe they are visiting and gorging themselves again.  For now, every stride in the yard is a splash of fleeing hoppers.


We could eat them ourselves I know, but I'm not going to.  It's a very human thing to carve out a category, "food" from within the larger category of edible things - and until I'm a great deal hungrier than I am now, insects aren't food.  When we get chickens they can eat bugs and transform them into eggs for us. 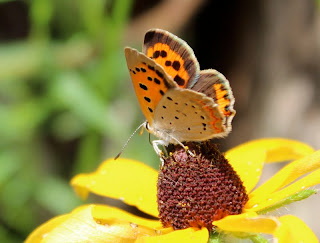 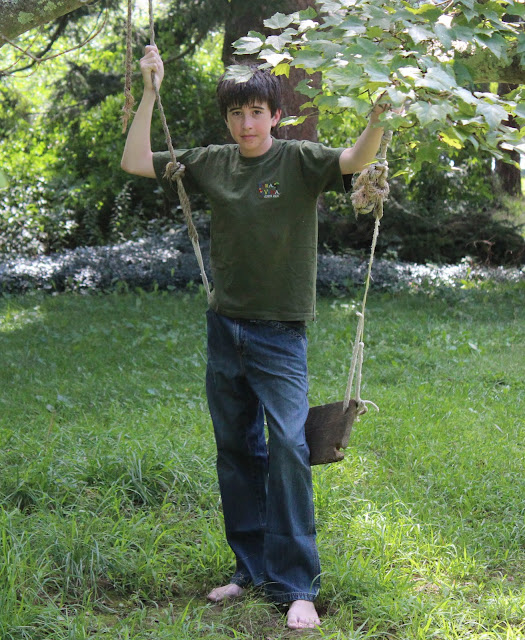 Porter was gone for all of July,
off among the extended family in Pennsylvania and Maryland.
He's back now.  With a voice an octave lower. 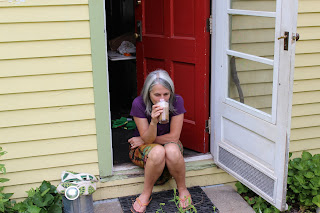 Iced Coffee on the front step.
Because it's August. 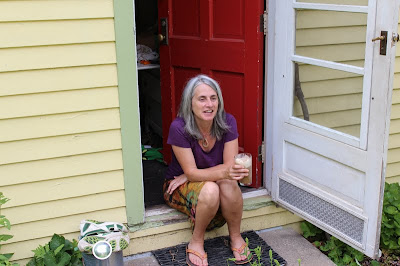 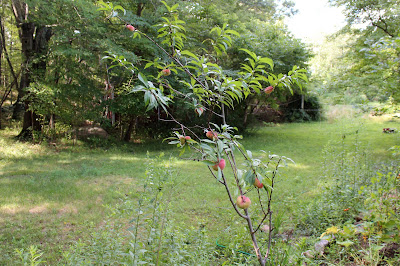 I'm no orchardist yet.
But the peach crop increased fivefold.
From two peaches to ten.
One of the hard things to do in life
is to actually be in the moment.
To slow down and be.
But watch a peach
grow from bud
to flower
to green marble
to vulnerable, unlikely fruit.
Steal it before the others can.
When you taste the wet flesh,
and chew the tart, berry-like skin,
and the rough, jagged stone grates against your teeth,
how can you not be in the that moment? 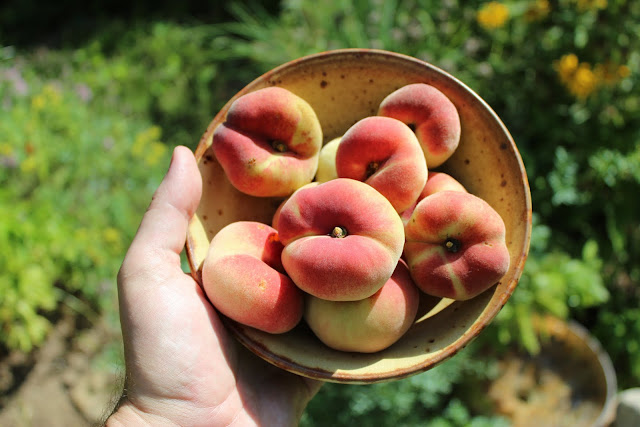 _
A male Reddish-Brown Stag beetle (lucanus capreolus),
picked up by Porter on the walk. 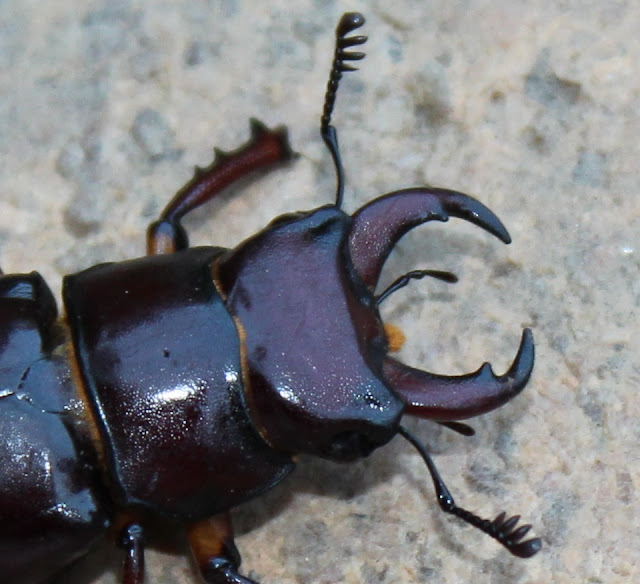 Email ThisBlogThis!Share to TwitterShare to FacebookShare to Pinterest
Labels: outdoors

_
Since the early 1950's the Metz Family Reunion has been taking place at Brown's farm in Airydale, Pennsylvania.  This Saturday was the latest gathering, and here are a few pictures and some video of the barn dance.

My great grandfather, Samuel Metz had 12 brothers and sisters.  It's the clans that have descended from them who have returned here every July for the past 60 years.
_
Posted by Andy Brown at 9:44 AM No comments:

Email ThisBlogThis!Share to TwitterShare to FacebookShare to Pinterest
Labels: travel, video
Newer Posts Older Posts Home
Subscribe to: Posts (Atom)
Do I contradict myself?
Very well then I contradict myself,
(I am large, I contain multitudes.)
----  Walt Whitman
"Song of Myself"