Eulogy for a Farmhouse

There's a valley in central Pennsylvania named the Kishacoquillas.  But that's far too long a name for a landscape of farmers and so it's simply called Big Valley.  It's a broad vale of limestone farmland between two forested ridges of sandstone and shale - Jacks and Stone mountains.

At the Reedsville end you can fit a dozen large farms between the ridges, but Big Valley narrows like a funnel and by the time you get to Airydale, the valley is a single farm wide.

By 1909 my great, great grandfather, Cyrus Brown, had acquired a couple of these farms for his sons, and Fred W., being the elder, was given first choice.  His wife Margaret, my great grandmother, considered the two farm houses.  One was built of brick and one was built of wood.  But from the brick house she looked down upon the 110 steps to the spring, and at the wooden house she admired a springhouse that stood right alongside the stone foundation.

And so it was there, in the wooden house, that my grandfather, Porter Brown was born a few years later in September of 1913.

No one is quite sure when the house was built, though best guess is in the 1850's or 1860's.   The springhouse, with its icy reservoir of clear water, was convenient in the days before refrigerators, but a house built on a spring means a cellar that is never dry, and living a hundred yards from the valley's watercourse means that heavy rains and winter floods fill the basement right up.  A surveyor measured from the bank of Saddler's Run to the threshold of the cellar door and found an elevation of a mere six inches across marshy pasture. 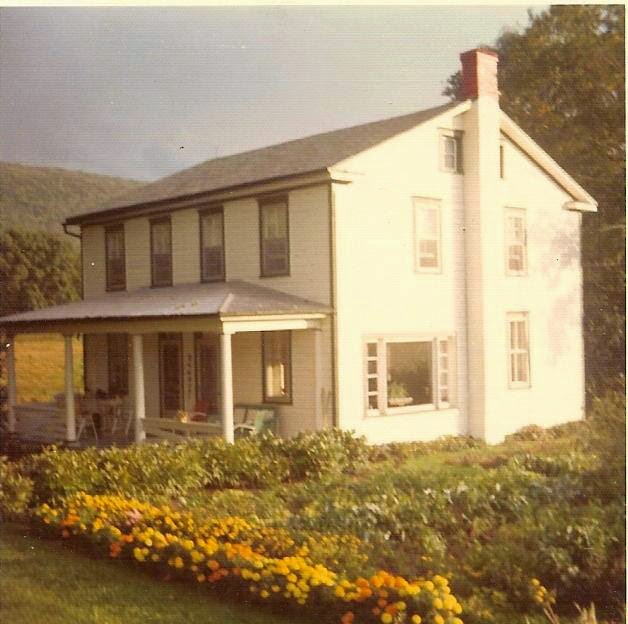 The house itself was dry and stayed mostly solid.  In 1939 Porter spirited Marian Metz away from her resistant father.  Though she lived only a couple of miles away, in order to marry her he'd had to drive down to Florida to where she was traveling with her sister and they'd turned that into an elopement.

By the summer of 1940 they were moved into the farmhouse and had a new baby, Richard, who would grow up to be my father.  Brothers Bob, Fred and Tom would follow.  To make way, Fred W. and Margaret removed up the lane and across the road to a hewn-log house at the foot of stone mountain - still in view of the farm.   Their move set a pattern that is still holding after three generations.

In the late 1950's, my father had left the farmhouse behind to go to Penn State, where he studied science.  He would go on to became a teacher and settle in Lancaster county.  For me, growing up in Lititz in the 1960's and 1970's, the old house was Grandpa and Grandma's.  It was a place of summertimes and holidays and visitings, and of course the Reunion in July, which anchored the summer-half of the year just as Christmastime anchored the winter. 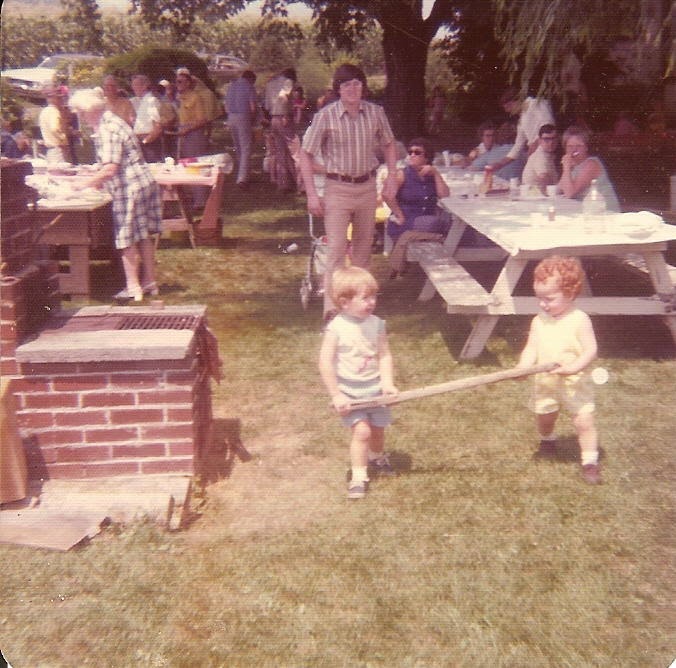 More of my own memories are of the barn and the fields and the creek and the mountain - and fewer of the house itself - probably because that was a place where Grandma would put you to work if you lingered too long - shelling peas on the back porch or sent off to pick blackberries for a pie.  I do well remember the oval, oaken table of the dining room, creaking under the weight of enormous family dinners.

In the 70's, Porter and Marian made the move up above the road, and my uncle Fred and aunt Vicki took the farmhouse as their home.  There they raised their three children, patched up what needed to be patched and put up with the crooked walls and the little, cramped kitchen.  They accepted the now decades-deep responsibility of hosting July's Metz family reunion, when two hundred relatives gather at the farm.

I returned for a couple of summers when I was a teenager - working for my room and board (and a couple of pigs to show and sell at the Huntington County fair).  My cousin Scott was 8 years younger, and he would soon be the one to grow into a farmer.

When Fred and Vicki had had their share of the decades, they in turn took the old hewn-log house (now significantly expanded), and the farm passed to my cousin Scott and his wife Emily.  And there they raised their own children, and made their own changes and their own repairs and renovations.

But the crooked floors, the flood-prone basement, the entire old, creaky building has had its day.  This autumn it is coming down.  Scott and Emily have built a new house - higher up, farther from the creek - and plumb.

After Reunion this summer the descendants of Porter and Marian gathered one last time there in the front room and we shared our stories about the house - experiences we'd had there or lore we'd been taught.

Dad and his brothers reminisced about squirming into the furnace housing after the coins that would fall from their father's pockets when he dozed above the grate.  They related much and more of the history that I've just summarized.  Floods were recounted; renovations and rearrangements; tearing out the horsehair plaster; the mysterious extra front door that was paneled over; the clearing of the attic; the party telephone line that was conduit and source of gossip.

I think Scott and Emily might have feared - when the extended family conspired to descend upon them on a Sunday evening and reminisce within the doomed farmhouse - that there might be ill-feelings about their decision to raze it.  But on the contrary, the togetherness served to prove that all these memories and the continuity and strength of family don't adhere to the boards and beams of this structure - but to the people and the connections between them.  And the ability to get together and share stories that murmur down the generations.

It was a good house.  It did what it was meant to.  It sheltered, and in its shelter were created such families and memories and stories.