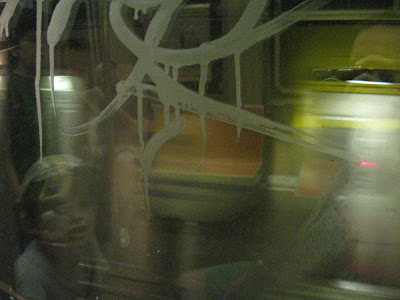 New York City is too big - a universe unto itself. 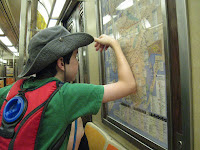 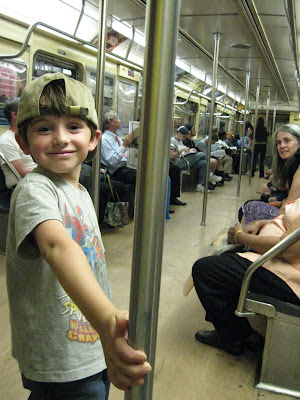 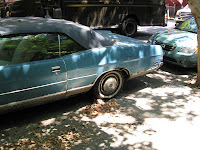 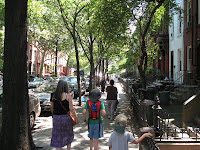 But what an extravaganza of human diversity!
We drove into the city on Tuesday evening after work, to stay with a friend in Brooklyn.  There was good Polish food on Bedford Avenue -- pierogi, kielbasa, sauerkraut, stuffed cabbage.  And Polish language murmuring through the small place to complete the aroma.
And Wednesday after a false start (who knew NYC buses don't take dollar bills?!) we met Denver, Rhonda and their little girl Maybelle for breakfast at a little locavore place by Cobble Hill park.  And afterwards sat on benches while the kids made sand castles in the park.
Then it was across town to Manhattan and the Museum of Natural History for large doses of paleontology and museum anthropology -- punctured with sightings of characters from the film "Night at the Museum".
And Central Park for late afternoon picnic of bagels.  And the boys got blue popsicles that turned them a sticky, zombie-like color.  We watched the herons and turtles of Turtle Pond, took the view from Belvedere Castle.
A bit after 7 I left them to their wanderings and took the subway back to Brooklyn where Denver was doing a reading with Matt Maneri.  Matt's improvisational viola perfectly complements the slightly disorienting rhythms of Denver's poetical tangents.  And the way they so clearly dig each other's stuff  adds a pleasure to the watching and listening. 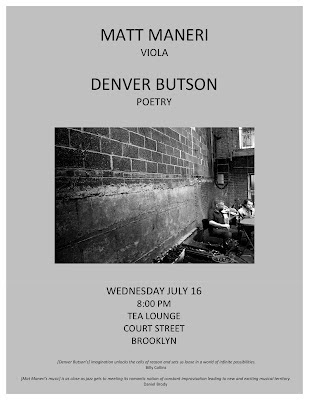 Tuesday Morning 9 am
A man standing at the bus stop
reading the newspaper is on fire
Flames are peeking out
from beneath his collar and cuffs
His shoes have begun to melt
The woman next to him
wants to mention it to him
that he is burning
but she is drowning
Water is everywhere
in her mouth and ears
in her eyes
A stream of water runs
steadily from her blouse
Another woman stands at the bus stop
freezing to death
She tries to stand near the man
who is on fire to try to melt the icicles that have formed on her eyelashes
and on her nostrils to stop her teeth long enough from chattering to say something
to the woman who is drowning
but the woman who is freezing to death has trouble moving with blocks of ice on her feet
It takes the three some time to board the bus what with the flames and water and ice
But when they finally climb the stairs and take their seats the driver doesn’t even notice
that none of them has paid because he is tortured by visions and is wondering
if the man who got off at the last stop
was really being mauled to death
by wild dogs.
Denver Butson, from Triptych.
Posted by Andy Brown at 8:45 PM No comments: