_
Porter has been in a private school since 4th grade and Nico since 1st.  The boys are smart, well-mannered, charming in their own ways, and their test scores help the place buff its image as a good school.  It may, as one local Blueblood scoffed, be the kind of school that turns out Peace Corps volunteers, but it can also run rough with currents of privilege and class. 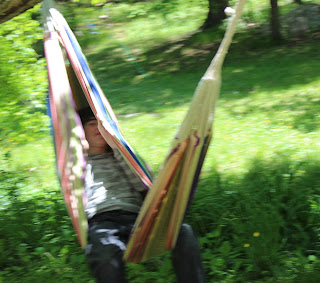 My own background is from a kind of rural intelligentsia - teachers, shopkeepers and farmers.  But they were educated to whatever degree life allowed, and they owned books, which they read and could quote.   From white settler stock (English, German, Dutch, Scots) they were mostly modest people of local consequence and not given to class anxieties or feelings of inferiority toward those "better off" than themselves.

I mention it because I wouldn't have set them into a private school - given our modest means, small house, and '97 Saturn station wagon - if I thought they would be afflicted by the more poisonous aspects of class and its divisions and oppressions.  And they don't seem to be - they can sort the friends from the knuckleheads, and not confuse wealth with a person's quality.  They can recognize our own privilege (the travel, the education, the network of relatives and friends) -- even in comparison to their wealthier classmates.

The boys' school only goes up to 9th grade, so this was always going to be Porter's last year there.  Still, it came as a surprise to me when he choose to pursue boarding school.  He applied, interviewed at schools, visited and so on -- aided by a guidance counselor schooled in these things, of course.  And the Cate School in California wants him to join them and they have the resources to make it happen.  So in August we'll settle him in - one of eleven sophomores joining a class of about 55.  It's one of the best high schools in the country (and certainly one of the most expensive) and will give him the springboard into whatever combination of education, social milieu, and avocation he chooses to reach for.

He follows a family tradition of pursuing the best education within reach, and I wouldn't let him go if I didn't think he was grounded enough to take the best of it and leave the worst.

Email ThisBlogThis!Share to TwitterShare to FacebookShare to Pinterest
Labels: anthropology, musings, photos, Porter
Newer Posts Older Posts Home
Subscribe to: Posts (Atom)
Do I contradict myself?
Very well then I contradict myself,
(I am large, I contain multitudes.)
----  Walt Whitman
"Song of Myself"