_
It was a dark age for greens in 1970's Pennsylvania when I was growing up.  Iceberg lettuce was the standard.  It might be livened up with a dollop of miracle whip and a sprinkle of cheddar -- or maybe covered with a quivering slab of jello cross-hatched with shredded carrots and/or pears.  There were many other variations equally dismaying. 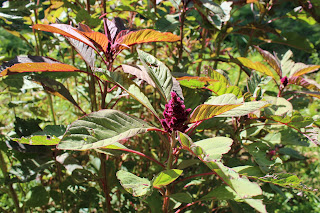 We grew our own lettuce in the garden, but I didn't appreciate its extra flavor and would only eat it if my mother let me make a "lettuce roll," which entailed sprinkling sugar on the leaf and rolling it up like a green cigarillo.  My mother was a health major in college and had no illusions that this was somehow a pathway to healthy eating.  As a boy, I'd eat sweet corn, winter squash, raw carrots, and green beans, the last of which were after all usually cooked with bacon and cheese.  No lettuce or summer squash or spinach.  Kale, collards, chards, mustard greens and so on weren't part of the vocabulary then.  The only greens that I actually liked to eat were two garden weeds, lamb's quarter and redroot.  Lamb's quarter I now have as an edible weed in the garden (if I'm going to have to weed, it might as well double as harvesting, no?)

The other weed, which we called redroot is also known as pigweed or common amaranth (amaranthus retroflexus).  Like lamb's quarter, when cooked the young leaves make for a mild but hearty-tasting green.  As it matures it grows tough and if let grow too long the bracts on top scatter ten thousand little blacks seeds as you pull it out, ensuring that next years plot will be just as weedy.

I decided to plant a variety of the domesticated plant from Opopeo Mexico that FedCo seeds has available.  FedCo claims they are a good green for eating, but somehow I neglected to try it this year until after they had begun to flower.  I think I was thrown off by their red, bronzy color - since by the time the wild redroot gets reddish it's far past the eating stage. 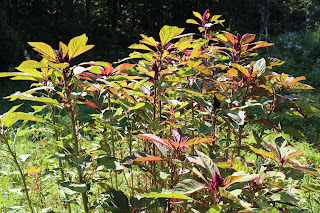 So, my plan for growing it as a vigorous green having fallen through, it will have to be an experiment in grain - if I can manage to keep them standing until October when they are ready for harvesting.

Varieties of amaranth were a staple grain of the Aztecs, cultivated for 8,000 years, before the Spaniards forbade them to sow it.  (The Aztecs used to craft an idol from the grain mixed with honey, which they would then break, distribute and eat in a ceremony.  Even if that's the kind of thing that the Catholic Spaniards weren't going to tolerate, it seems a little extreme to ban a staple crop - but extreme they were.)  Amaranth nevertheless survived those banished centuries in the mountain valleys and now it is cultivated again around the world in India, China, Africa and Russia.  Commercial growers can produce 1,000 pounds of grain per acre -- at 600,000 seeds per pound - that's a lot of seeds, each one about a millimeter in diameter.  I've neither thinned my little plot nor fed it, so I'm expecting more of a little sample tasting crop.  Still, they say each plant can produce a half pound of seed, so we'll see.

Amaranth can be used like other cereals - cooked and added to dishes or popped like popcorn (which is my intent) - and mixed with honey or chocolate.  (In Mexico they call this alegria.)     It's high in protein (12-17%) and lysine, an essential amino acid, as well as calcium and iron, but no gluten, which is one reason it's a favorite in many health foods.

So far the plants seem to be thriving from neglect, which is one of the primary things I ask of a garden plant.  After all, the plants name comes from the Greek, amarantos, or the one that does not wither, but we'll see. Updates will follow . . . .

Posted by Andy Brown at 5:11 PM No comments: