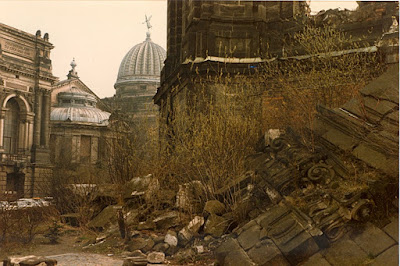 Ruins of the Frauenkirche, Dresden, April 1986
photo A. B.

Last night I watched the film "Lives of Others", (Das Leben der Anderen) about a East Berlin Stasi operative who gradually loses his way in a surveillance operation over a playwright and his lover.


The atmosphere of the film brought me back to the couple of weeks that I spent there in 1986.   It makes me wonder what my own Stasi file looks like.  I have to assume that there was one, though I have no idea how interested they were in a handful of undergraduate students on an art history tour.  Did they note my wandering off into the countryside outside of Weimar that one afternoon?  The scruffy man ranting about the state in the cafe?  Is there a description of Margaret's and my tryst in the woods outside of Dresden?  The students who proudly avowed that if they ever got a visa west they'd never come back?  How much had the Stasi unravelled by 1986?


One night I remember in particular.  Georg was our tall, dark and handsome art history professor, and the force behind the whole journey behind the Iron Curtain.  Early in the trip he had seduced the young East German woman who was our keeper, earning himself some extra latitude in the bargain, I think.  In any case itineraries became uncertain and the two of them would disappear at times -- hence my wanderings through the villages by Weimar.  Georg had a friend in Leipzig and he and Frank (the hen-pecked assistant for the study abroad program) and myself conspired to escape (to whatever extent) the gaze of the Staatsicherheit.  I'm not sure how it was arranged, but the three of us strolled away from the hostel, and when a car suddenly pulled up alongside us, the street entirely free of other traffic, we quickly hopped in.


The driver was the wife of a painter and she brought us to their large apartment.  I remember that we drank white Hungarian wine and talked of politics.  The apartment was filled with artwork, because the painter was not in the good graces of the state and could neither exhibit nor sell his work.  A lot of the work I found unlovely, dark and with twisting rats and birds -- but I can recall vividly one bright painting entitled something like Icarus afraid to fly.  It summed up the frustration that idealistic East Germans felt about their rigid and corrupt government and the dreary society it nourished.  I could see why the state censors didn't appreciate it.


In the film, set a year or two earlier than my trip, a rigidly controlled Stasi captain, suggests to his superiors that an apparently loyal playwright ought to be watched.  His request is granted, though not because the man, Dreyman, is a threat to the state, but because a minister covets Dreyman's lover, an actress, and wants him out of the way.  The elegance of the movie is in the way the loyal Stasi interrogator and the unheroic playwright are pushed into sympathy by their common antagonist - the corrupt officials who run the system for their own benefit.  The lusciously detestable officials and the actress they destroy aptly represent the depressing (and intimidating) spectacle of the East Germany state that artists, young people, idealists and patriots had to confront in living through that time.  I remember how it permeated the conversations I had there that spring.


The thing that makes the film bearable ultimately is the fact that the dismal trajectory -- of progress deferred and betrayed -- which in 1984 and still in 1986 was assumed to stretch endlessly into the future -- collapsed suddenly and thoroughly only a few years later.

Posted by Andy Brown at 3:52 PM No comments:

Email ThisBlogThis!Share to TwitterShare to FacebookShare to Pinterest
Labels: musings, politics, travel
Newer Posts Older Posts Home
Subscribe to: Posts (Atom)
Do I contradict myself?
Very well then I contradict myself,
(I am large, I contain multitudes.)
----  Walt Whitman
"Song of Myself"