.
Euan Mearns posting at the Oil Drum put up a couple of sobering graphs showing the scale of the problem we're going to have getting off fossil fuels. 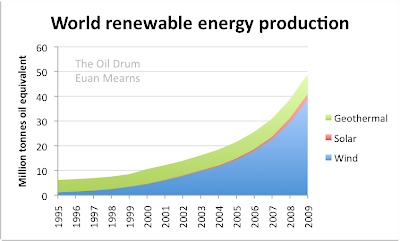 Then the sobering news: 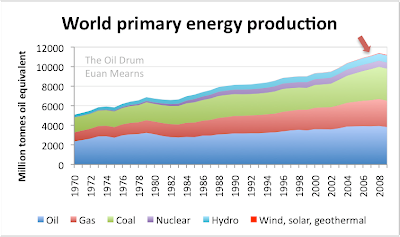 The thin little line at the top (reddish if you can see it) is our current capacity for renewable energy.

It's possible that if we'd started a generation ago and we'd taken vast amounts of these fossil fuels and used them to build windmills and solar panels and tidal generators and cities that were energy efficient; and if we had created local, less energy intensive foodways and so on; and if we'd kept populations at a level that our ecosystems could support sustainably -- then we would be able to transition to an energy-sustainable system without our civilization collapsing.  But we didn't, and now there are a pair of locomotives coming down the tracks -- the first is the fact that oil production has reached its peak and is about to go into serious decline and the second is that if we don't figure out a way to leave some of the remaining fossil fuels in the ground, starting right now, we are almost certainly going to send the planet's climate into a dangerous, and probably fatal, tailspin.

But we are doing nothing at all to the scale we would need to.   Denial, delusion and magical thinking reign.  There is zero political will to even acknowledge the problem, much less do anything about it.  Even leaving the active denialists aside, none of the rosy scenarios seem based in reality at all -- not those rooted in alternative energies, nor conservation, nor technological solutions, nor blind faith that we humans are up to this task and will inevitably figure something out.

Humans have an ability to concoct visionary futures, a profound power that has enabled humans to expand the realm of possibilities beyond what other animals could possibly manage.  Ironically, with that skill of imaginizing running up against the hard physical constraints of an energy economy, it is only enabling us to fantasize our way off a very real cliff.

Email ThisBlogThis!Share to TwitterShare to FacebookShare to Pinterest
Labels: musings, sustainability
Newer Posts Older Posts Home
Subscribe to: Posts (Atom)
Do I contradict myself?
Very well then I contradict myself,
(I am large, I contain multitudes.)
----  Walt Whitman
"Song of Myself"