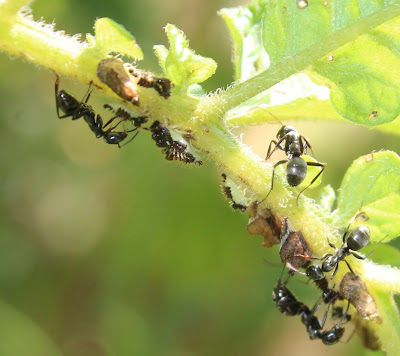 I was belatedly picking bugs out of the garden when I spied smallish black ants busy on a volunteer potato plant along the amaranth. It was hard to see what they were up to - since getting too close meant I was being bitten by smallish black ants.  I snapped some photos, and once I could zoom in I could see that these ants were farming a herd of treehoppers and their nymphs.

The hoppers and the nymphs suck on the juices of the plant, doing it some damage in the process.  The ants patrol and protect their charges in exchange for the "honeydew" they extrude.

The adult hoppers look a bit like thorns on the side of the stem, while the nymphs are bizarre little guys - white below, dark above with spines and prominent eyes that are slightly cicada like (to which they are related, apparently).

Interestingly, although my potatoes are currently being devastated by blister beetles (more on that in tomorrow's post) this plant had no sign of damage.  Presumably the aggressive ants won't tolerate the beetles destroying their leafhopper ranch. 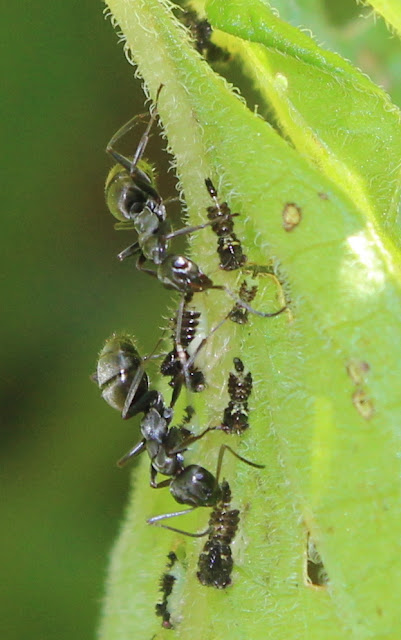 MORE PHOTOS BELOW:
Click here to read more »
Posted by Andy Brown at 4:13 PM No comments:

Email ThisBlogThis!Share to TwitterShare to FacebookShare to Pinterest
Labels: garden, outdoors, photos
Newer Posts Older Posts Home
Subscribe to: Posts (Atom)
Do I contradict myself?
Very well then I contradict myself,
(I am large, I contain multitudes.)
----  Walt Whitman
"Song of Myself"