a earlier poem from the third week of June:

the pleasure she only dreamed about.

Faced, he can be no companion.

Posted by Andy Brown at 8:11 AM No comments:

Anatomy of a pretty good day.
I slept in until nearly 8 -- so uncharacteristically late in fact that Monica asked me if I wasn't feeling well. But no, I was just feeling well-rested. 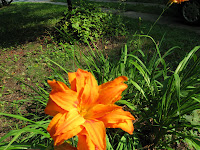 After she had left for her last day of camp, I cut slices off a round of durum bread, and made scrambled eggs for Porter. Just toast and black coffee for myself. It was a crisp, clear, cold morning and Porter wore a winter vest at the breakfast table.
I settled down with the laptop to read a few blogs and skim the New York Times. Alberto was on the other computer reading El Colombiano and Nico was navigating on the iBook for some game he was playing. But the internet connection cut in and out, so when Alberto returned from delivering Porter to the horse farm (after his stop at Pete's grocery, where he spent half an hour buying his lottery tickets and chatting with the staff and with the tourists), I drove the five miles down to the coast to a coffeehouse with wifi.
The day was warming up and Route 1 was filling up with summer traffic. I'd already drunk too much coffee at home, so for once I was pleased to see iced coffee that was mostly ice. We had a minor report due out this day. Axel was down in New York scrambling to put it into final form and I was combing the data for support for the propositions we were making about the best ways to talk about the government's role in the economy. (Our original propositions collapsed a few days ago, when the data turned out not to support them -- or more specifically the approach we'd been exploring had turned out to interact in unfortunate ways with the public's current, top-of-mind model of the government's role, namely, all the damned bailouts.
Fortunately, we discovered another promising route from outside our research cul de sac.) It turned out, surprisingly, that integrating the idea of community colleges as an example of the government's role in the economy created all kinds of positive effects in people's thinking, and so we were re-writing and quickly integrating control data that we'd generated the night before. But I also had to launch some internet surveys testing a couple of promising gambits for another project about counter-terrorism, torture, detentions, surveillance and ethnic profiling. We were already deep into the subjects' database on this one, and I needed to wring more male conservatives out of it.
Back home at about 12:15, Nico was still in pajamas, drawing some grand narrative on five feet of old-style perforated computer paper that he'd found somewhere. I hollered at him to get dressed and the three of us soon piled back into the car.
Porter had been at Turning Pointe all week with the horses. Though the place is mostly about "therapeutic riding" for handicapped kids, they offer a camp a couple of weeks out of the summer for local kids to learn about riding and caring for horses. 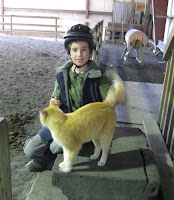 (Porter first climbed onto a horse in rural Costa Rica, where it's a masculine pursuit, so he's a little perplexed about why here he's the only boy in a universe of girls and women.) Today was the last day and we were invited to come to a horseback play they were putting on.
It's only a couple of miles up the road and Porter handed us a handwritten playbill when we pulled up to the barn.
We met the horses, (Porter's mount, Cinnamon, was licking his lips and drooling a puddle. According to Porter he'd grazed on grass too close to a toad and gotten a mouthful of toad pee.)
Porter played the role of policeman in a short morality play of two girls who forgot about their horses and went off to play. Porter was still wearing his vest decorated with an orange felt badge. I think he felt the vest gave him a more official air. After a second act about moderation (too many apples for the fat pony) there were cookies for the humans and carrots and mint candies for the horses. Porter brushed and groomed the horses with casual competence. 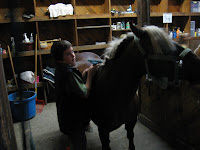 At home the internet connection was working so I cleared a spot on my desk and se
t about checking the new data from the surveys I'd launched earlier. We were trying to get people to acknowledge the dangers of enabling government to combat terrorists in ways that disregard law and constitution. By 3 o'clock, I done what I could do, and the data was pretty good, especially given the challenge. I called Axel, to make sure he didn't need any more help with the report, and then yelled down to the boys to get their swimsuits and their shovels, we were going to the beach.
And the Beach Full signs were up for the town strands, but we slipped into the sand lot at Ninigret, a few minutes past four, when they stop charging to park. 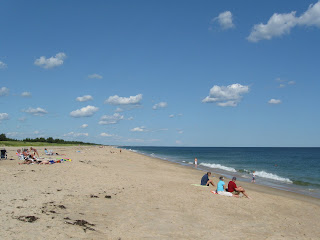 The sea was quiet, with the waves breaking at the shoreline. Porter swam and I helped Nico, who's forgotten how to swim. He has not an ounce of body fat and sinks like a stone. Porter and I did some body surfing in waves that were big enough to ride but no so big as to pound us into the sand. We made a castle that was attacked by every fifth or sixth wave, piling sand until our arms hurt, rescuing the beleaguered tower again and again.
On the way home, Nico asked why his fingers were tingling and I told him we'd moved about 500 pounds of sand -- "And the ocean took back 475 pounds of that!" he said. I told him he'd sandpapered his hands and they'd be more sensitive.
From behind, I felt him touch my shoulder and my matted, wet hair. "It's like I'm learning a new sense," he said. We passed the shop advertising frozen bait, which brought on a long, fantastical conversation about popsic-eels, with chocolate glaze or slug-slime glaze and a dusting of thistle-spines. "Um, my popsic-eels still moving." "Better pop it back into the freezer for a few minutes." Porter was cracking up.
It didn't spoil anyone's appetite though. We stopped by Pelloni's Farm for an apple pie we'd special ordered (with less sugar). At home Alberto had made hot dogs for himself and the boys as promised. Monica had heated up potatoes and spicy leftover bluefish (that she had fished from the Sound just yesterday). So once we had all cycled through the shower and I had vacuumed up the sand from the bathroom floor -- we ate.
In the evening the boys took my computer. They've discovered how to use the Netflix instant viewing to watch TV. It didn't take long for the bad laughtrack of the "Wizards of Waverly" to drive me out of the living room (at least there are no commercials!) I'd been putting off investigating the boys little attic ever since Nico told me that some critter had made a mess in there. I was afraid that it might be the red squirrel that has moved in to the yard. 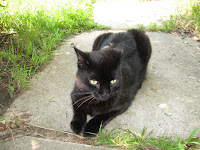 (In the mornings it sits in one of the trees sending down a cascade of chittering, buzzing red squirrel curses toward the cat Wilbur. Wilbur lays beneath the tree, looking inscrutably up every once in a while as though to say, "Oh, I'm sorry, were you speaking to me?") But there was no sign of the squirrel up there. A mouse had thoroughly chewed up something red and green, and I took the opportunity to clear out a garbage bag full of the boys older clutter, while they were distracted downstairs. At 8:45, when Netflix seized up, they joined me. For two boys so given to pack-rattery, they were pretty cooperative about clearing some things out. Their room had reached an unprecedented lever of clutter and chaos and maybe the idea that critters were going to start living in their stuff gave them food for thought.
But soon enough it was time for lights out and I joined Monica in bed and, eventually, in sleep.
And that was a pretty good day.
Posted by Andy Brown at 8:30 AM No comments: