After the summer dearth, when the heat and dryness slowed the nectar to a trickle, there comes an autumn nectar flow.

It is the time of goldenrod and asters, and the bees, who've been robbed of their surplus by their beekeepers will top off their combs with thin autumn honey.

I've mentioned that I haven't been a very good gardener this year.

The squash plants withered (though this year so did most everyone else's) and the cucumbers were under constant assault.

I got small potatoes because I let the blister beetles defoliate the plants in July.

Deer ate off half of the sunflowers and the Jerusalem artichokes (which have since grown back).

My greens mostly struggled, though I had plenty of tasty weeds.

I raised sugar snap peas for Monica, but it turned out she wanted snow peas, so they mostly went to waste.  Scarlet runner beans I planted had pretty flowers but didn't set a single bean.

We had plenty of herbs, especially cilantro and I gathered a jar of coriander when it went to seed.  Nasturtium and the Thai pepper plants are happy.  And we've got pesto in the freezer.

Not a bad crop of tomatoes, (at least before we went off to California for 3 weeks and the amaranth experiment collapsed on them).

The beets look good although the blister beetles are still chewing on the leaves.  I should pull them up soon and pickle them.

I'm fortunate I'm not depending on my gardening skills for my subsistence.

Fortunately the neighbors have been more diligent than I and they came by this evening with a bag of tomatoes and peppers.  I have some cilantro still going strong, (these were buried so deeply under the vetch that they didn't go to seed with the rest).  With this haul and the Thai peppers I'll make us a good, fresh pico de gallo. 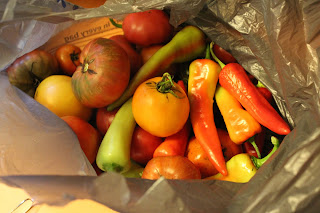