_
My three colonies are all building up at different rates. 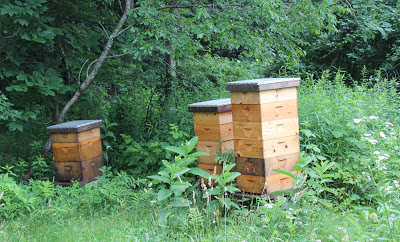 The northernmost hive is the most bustling - and making full use of the current nectar flow.  The bees have filled two medium supers with honey, most of it apparently already capped. (Supers are the boxes that sit on top of the brood chamber - and from which I will steal the honey.)   I had to quickly add another box before they ran out of space entirely.  That was my second to last super, so if they keep going I'll either have to get my hands on the bee club's honey extractor or buy some more woodwork.  Into it I put my last two frames of drawn comb, 5 new frames with wax foundation, and 3 empty frames for them to just hang comb in.

The middle hive is also bustling, though they've only filled one super and are still working on drawing comb in the second.  That one I can leave well enough alone for now, I hope. 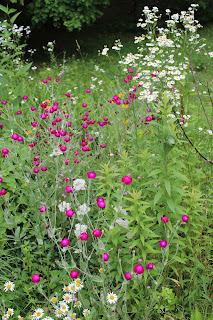 The southernmost hive is the laggard.  I did put a super on a couple of weeks ago, but the bees are not very active in it -- still outfitting the brood chamber below.  It's hard to examine inside, because I made a hash of things setting up.  In the bottom box I'd had some comb that bulged out and didn't fit, and another slot that was empty which they filled with comb.  Now it's all glommed together so it's impossible to really move the frames around to get a look.

Still I opened the top brood chamber to take a look and make sure there is plenty of brood.  Unfortunately, the second frame I pulled turned out to be a medium frame - I don't know why it was there - but the bees had diligently filled the several inches below the bottom of the frame with comb.  That tore apart as I pulled the frame out, so, yes, I could see there was brood there in the most unfortunate way possible.  I put it back, closed up and left them to repair the damage.  That hive I may not open again.  If they do put honey in the super eventually, I doubt I'll harvest it, but just leave it on for winter stores.

I'm not sure why there are such differences.  The flight path out of the beeyard tends to go off to the northwest, so probably the northern hive gradually accumulates more returning foragers.  Or that queen was a replacement and maybe she comes from somewhat different stock.  The southernmost colony is from a package that came two weeks later than the others, and has a queen that from the start didn't seem to lay eggs in the tight pattern that beekeepers prefer.  The colony has never seemed as active as the others.  But also, the hive is more tucked under the trees and in the shade.  Last year the colony in that hive was the first to expire, so I may relocate it next year.

Anyway, that's life on the beekeeping learning curve.  When you start a new colony from package bees (as I did for all three of these) you generally don't get much, if any, harvest.  But unless these bees decide to eat it all in the July dearth - it looks like there'll be honey to steal this summer.
_
Posted by Andy Brown at 6:27 AM No comments:

Email ThisBlogThis!Share to TwitterShare to FacebookShare to Pinterest
Labels: bees, photos
Newer Posts Older Posts Home
Subscribe to: Posts (Atom)
Do I contradict myself?
Very well then I contradict myself,
(I am large, I contain multitudes.)
----  Walt Whitman
"Song of Myself"