Once, when I was living in San Diego, some old friends were gathering in Tucson.  This must have been at the beginning of the 90s, because there was a year or so there when I didn’t have a car.  I discarded my ’78 Chrysler LeBaron in Eugene, Oregon for a cool $175, and a year of bicycling passed before I acquired an old diesel VW rabbit - bought for $500 from someone who was leaving San Diego in a hurry.  For this trip to Arizona I know I didn’t have a car, because I took the Greyhound bus from San Diego to Tucson, which is something only a person without a car would do.

My only recollection of that journey is the aftermath, standing at the fumey bus station, sore from hours in seats designed for very small people – designed specifically for a ridership shrunken and stunted from the poverty and desperation that drives one to ride a Greyhound bus between San Diego and Tucson.  Standing in front of the baggage claim desk – who knew such a thing even existed – being told that they had somehow lost my luggage, despite the luggage transaction being pretty simple and straightforward.  They were just supposed to have put my bag under the damned bus.

So with sore knees and no toothbrush nor change of clothes, I solemnly swore that the Greyhound corporation would no longer have the custom of Andrew J. Brown, future Doctor of Anthropology.

Nevertheless, after a successfully pleasant and reviving visit with old college friends – I went and did reclaim my pack from that bus company that was dead to me.  (Now I had two toothbrushes – since it turned out such were indeed for sale even in Arizona.)  But I was not prepared to forgive nor was I willing to be ground down – wedged tight from knee to sacrum - by plasticated seatage and 13 hours of transit purgatory.


Tied securely to my pack, I had a light summer sleeping bag. Whether this was foresight on my part or a loaner from a friend – I don’t remember.  Importantly, that item meant that I wasn’t bound to civilization or its abusive transit companies. I was an autonomous being – with my own portable home, like a tortoise or a Pima.  I’d hitchhiked plenty before – navigated the tundra of Finland and escaped the suburbs of DC.  It was with the optimism of experience that I hugged my friends goodbye by their desiccated ocotillo hedge, and strode off to the byways of the desert. 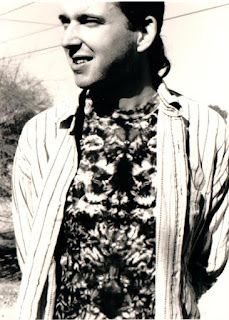 To this point, most of my hitchhiking had been done farther north.  In the northeast, where people are really too busy to develop elaborate, time-consuming fetishes about murdering hitchhikers and other vagabonds.  Or the vast sweep of the Great Lakes and northern plains, where murderous urges have been pretty much sublimated into church feuds, school board elections and Rotarian lunches.  Certainly nothing to trouble your average hitchhiker over-much.  Granted, the Pacific Northwest’s variety of ride-sharer seemed a bit sketchier and more drug-addled, but still pretty innocent.

But maybe the north is different.  In any case, it turns out that the Sonoran desert between Tucson and San Diego is peopled by another breed entirely.  Maybe it’s that night sky that flips a billion starry middle fingers to the significance of your ephemeral shuffle upon the coil.  Maybe it’s those unresolved tensions with your next door neighbor, an equally sun-stricken misanthrope across ten miles of creosote brush.  People driving across the desert did indeed seem to have time enough on their hands for elaborate hobbies and enthusiasms.

On the bright side, there’s also a kind of carelessness about consequence that means they will pick up a skinny, nervous-looking vagabond in the desert.  So there’s that.

As I entrusted my fragile-seeming body into one battered truck and sand-scoured car after another, I was mostly quiet and only sometimes did I ruminate about all of my fellow Greyhound passengers who had dozed away in that well-lit and public space of a bus and who would have been hard put to secretly murder me – even if their crushed and small-seated souls had retained such energy and ambition.

But in the end finally, after enough hours of sidelong glances and crackling, apocalyptic AM radio, as night was falling, I was set down anti-climactically in the stubble of an alfalfa field.  I’d crossed the desert to the Imperial Valley – a verdant swale of farming dangling south of the Salton Sea.  Interstate 8 hummed and sparkled to the south of me.  I climbed one of the huge rectilinear stacks of hay bales – two stories high and the size of a Mississippi river barge.  Standing atop you could see for miles into the dusk.  Sit down, and the land disappeared.  It was just sky above – and no one would ever know you were there except for the herons who flew hwarking overhead on their way to the rookeries.  And that suited me fine.

By then the billion starry middle fingers were pretty and sparklesome.   The folks of the dry washes and creosote brush had done me no harm after all.  My knees didn’t hurt.  In fact, as I unrolled the sleeping bag and stretched out on the aromatic bales, I very much liked my fragile body.  So yeah, I thought to myself, once I got myself back to San Diego, I was officially retiring from hitchhiking in the American Southwest.

I hwarked at one of the herons flying past, but it ignored me.
Posted by Andy Brown at 6:37 PM No comments: