Update on the bees 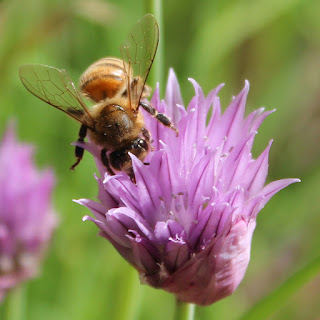 I have three colonies of bees going strong in the yard.

For a noob-beekeeper like myself, it's worth having three colonies rather than one or two just so I can get a sense when something is off in one.

For the most part they all seem to be doing fine.  Plenty of brood and plenty of activity in each.  Though the southernmost hive is lagging behind.

That queen was the last to arrive so there's that.  Still, she strikes me as an odd queen.  There's plenty of brood, but it seems more scattered throughout the brood chamber.  Whenever I've opened the hive I've never failed to find her (she's dabbed with a red dot of paint) and she is always on the move, always without any apparent retinue of attendants.  Maybe that's just her style.  Or maybe the old comb I gave her hasn't quite cleaned up to her satisfaction.  There was a fair amount of old pollen packed into it I think.

But the two stronger colonies now have their full brood chamber up (two deep bodies for one and three mediums for the other).  I'd been feeding them honey from last year, but that's about exhausted (or moved down into the brood chamber) and so I'll give them some sugar syrup while they finish outfitting their homes.  The weaker colony still hasn't filled out the single deep box I've given them, and I will definitely be feeding them until they gather momentum.

Posted by Andy Brown at 5:48 PM No comments: