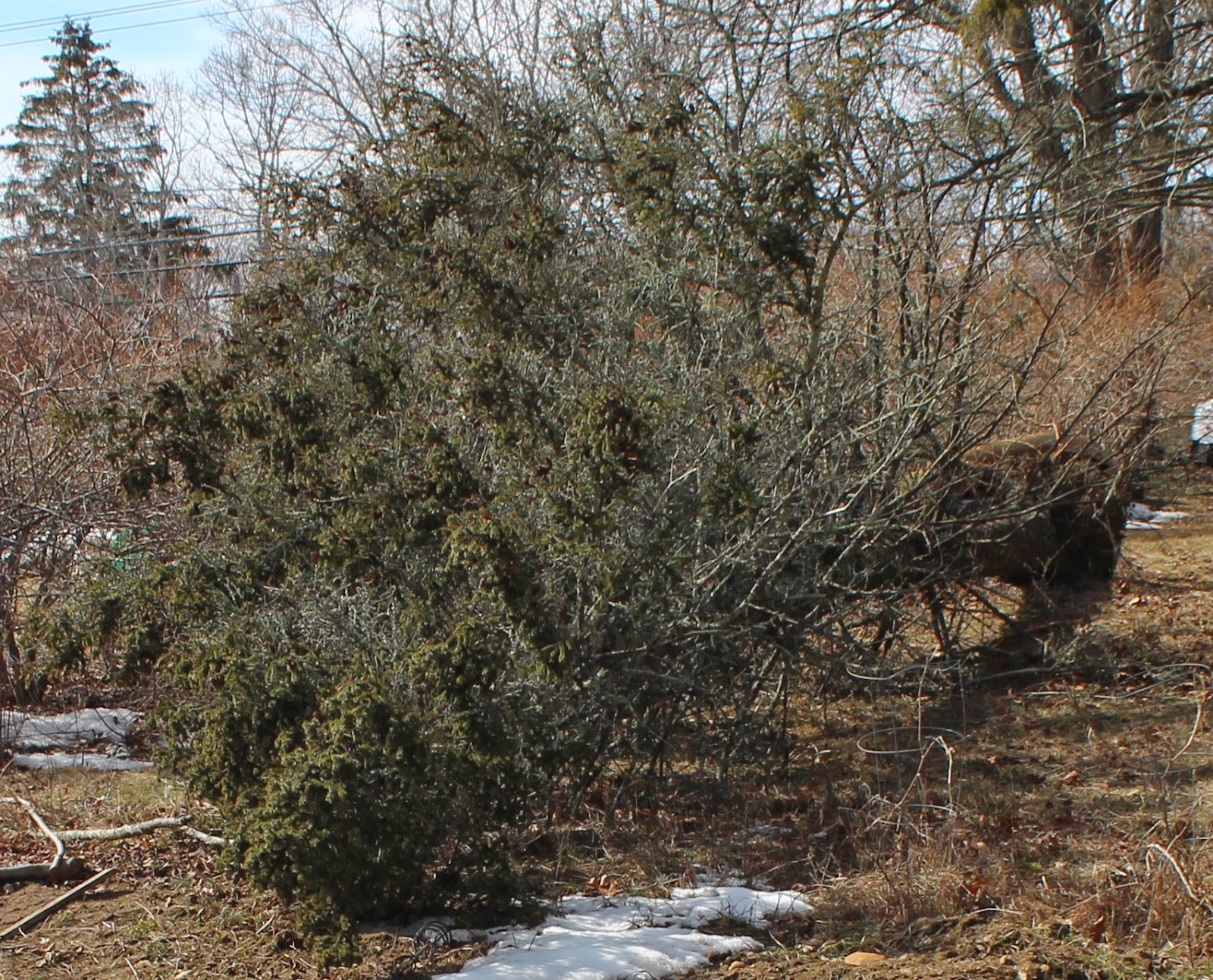 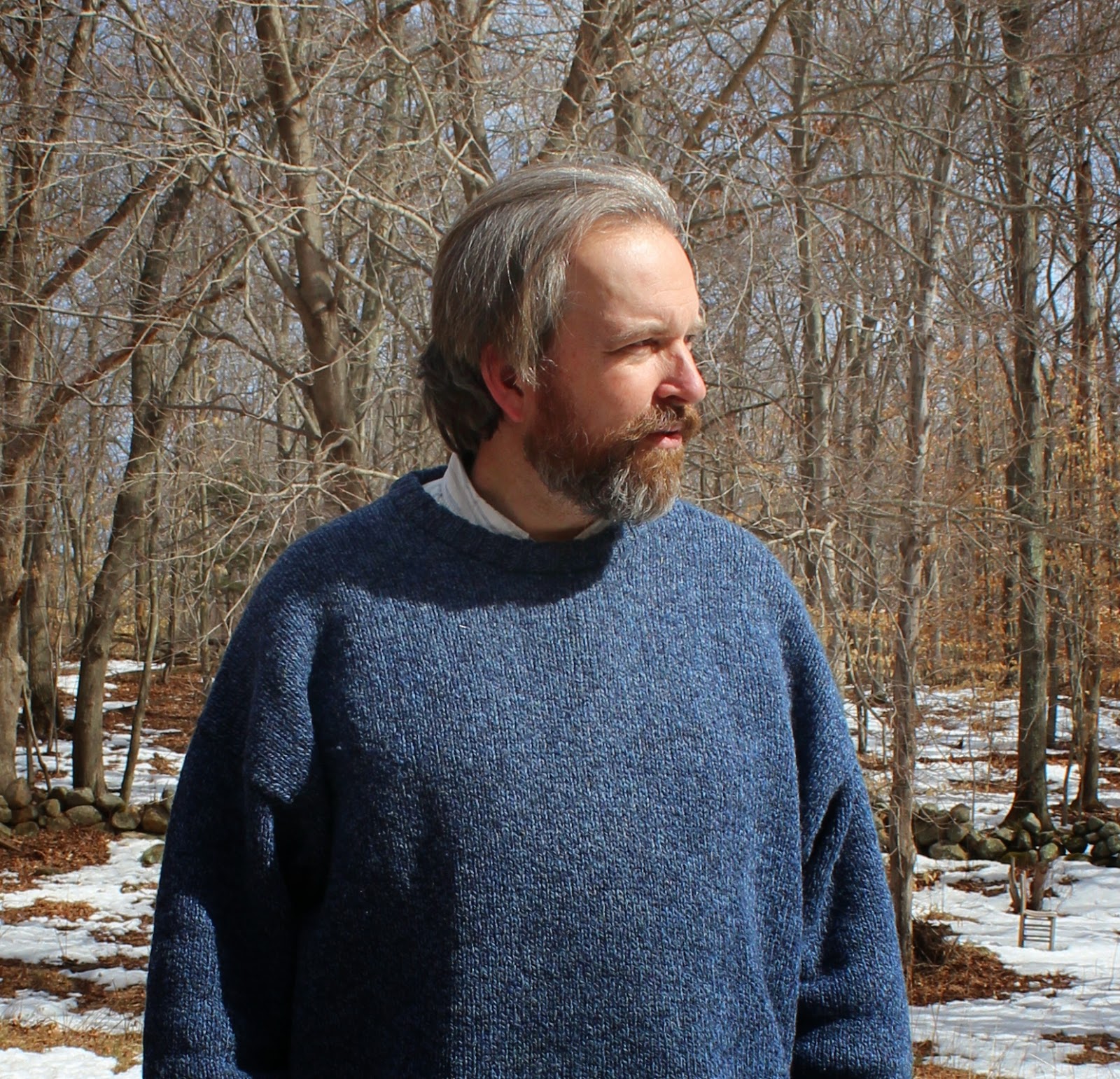 The strengthening sun stripped away the snow.

From under the drifts, a few cheery chard plants are basking in the cold frames.

But the freshening breeze turned violent and toppled a spruce down onto the garden.

A taller tree and the chard would be basking in shards of glass and splinters of wood.

But no, the only victim is a forsythia, which thrives on any kind of abuse. 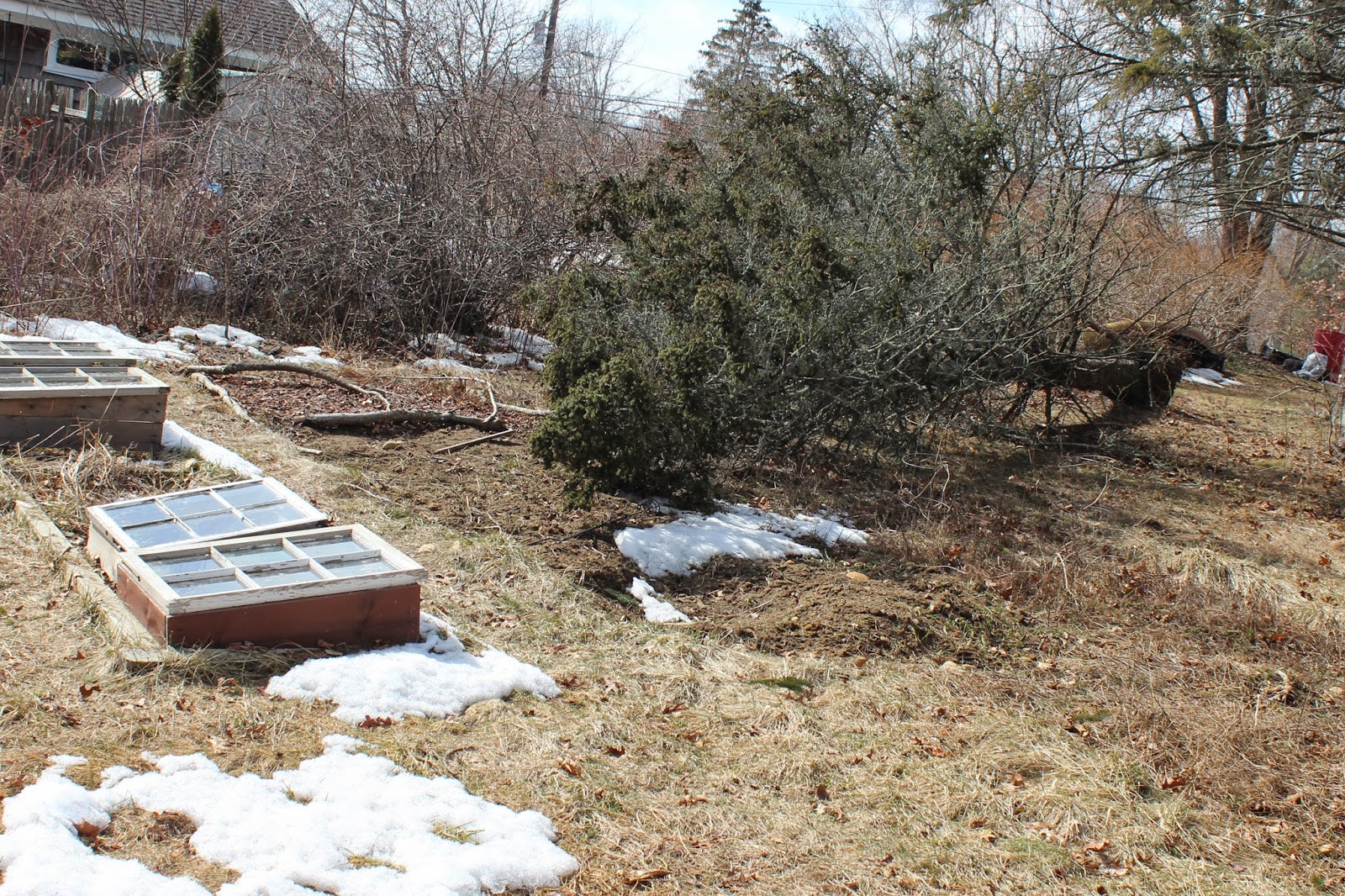 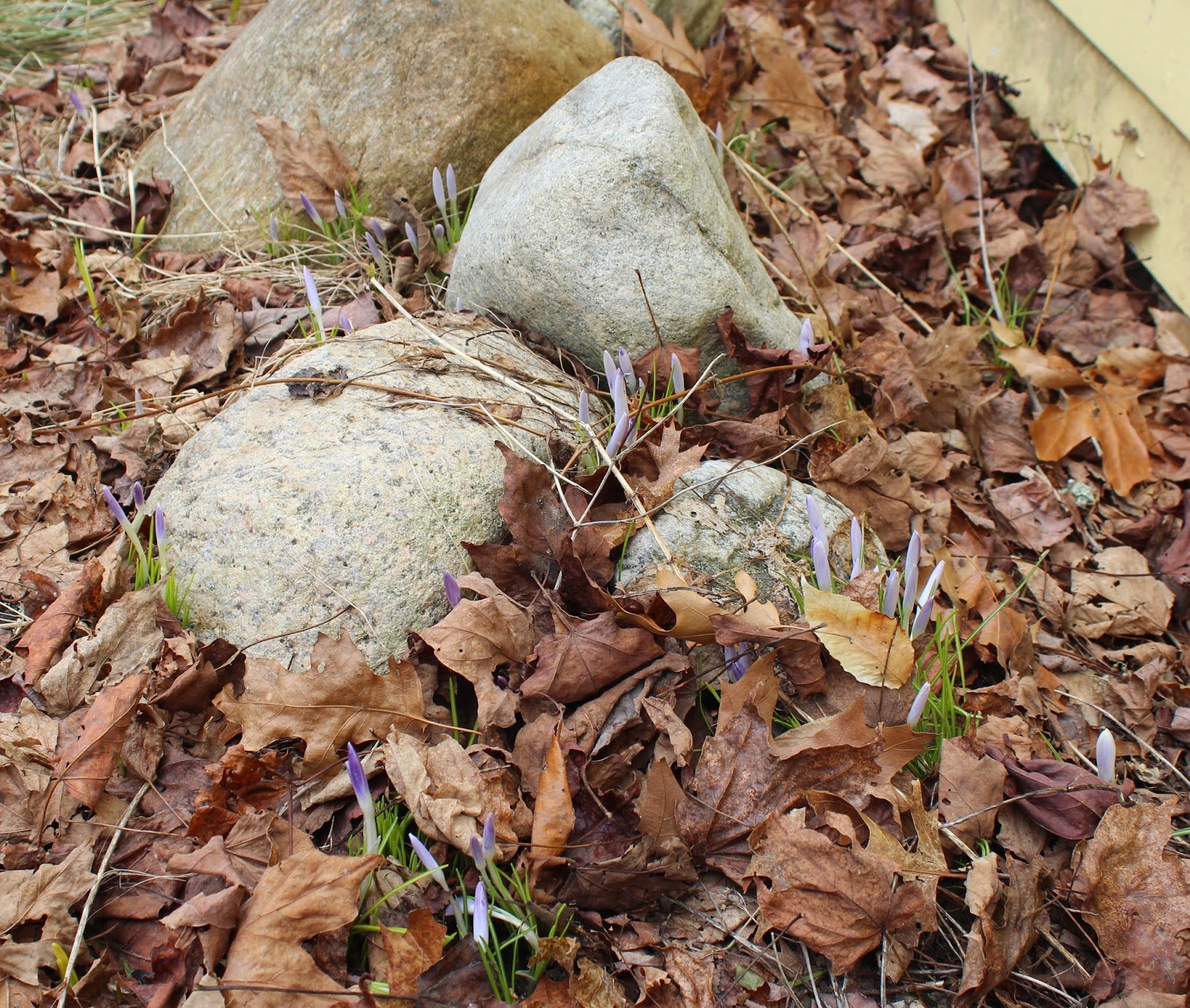 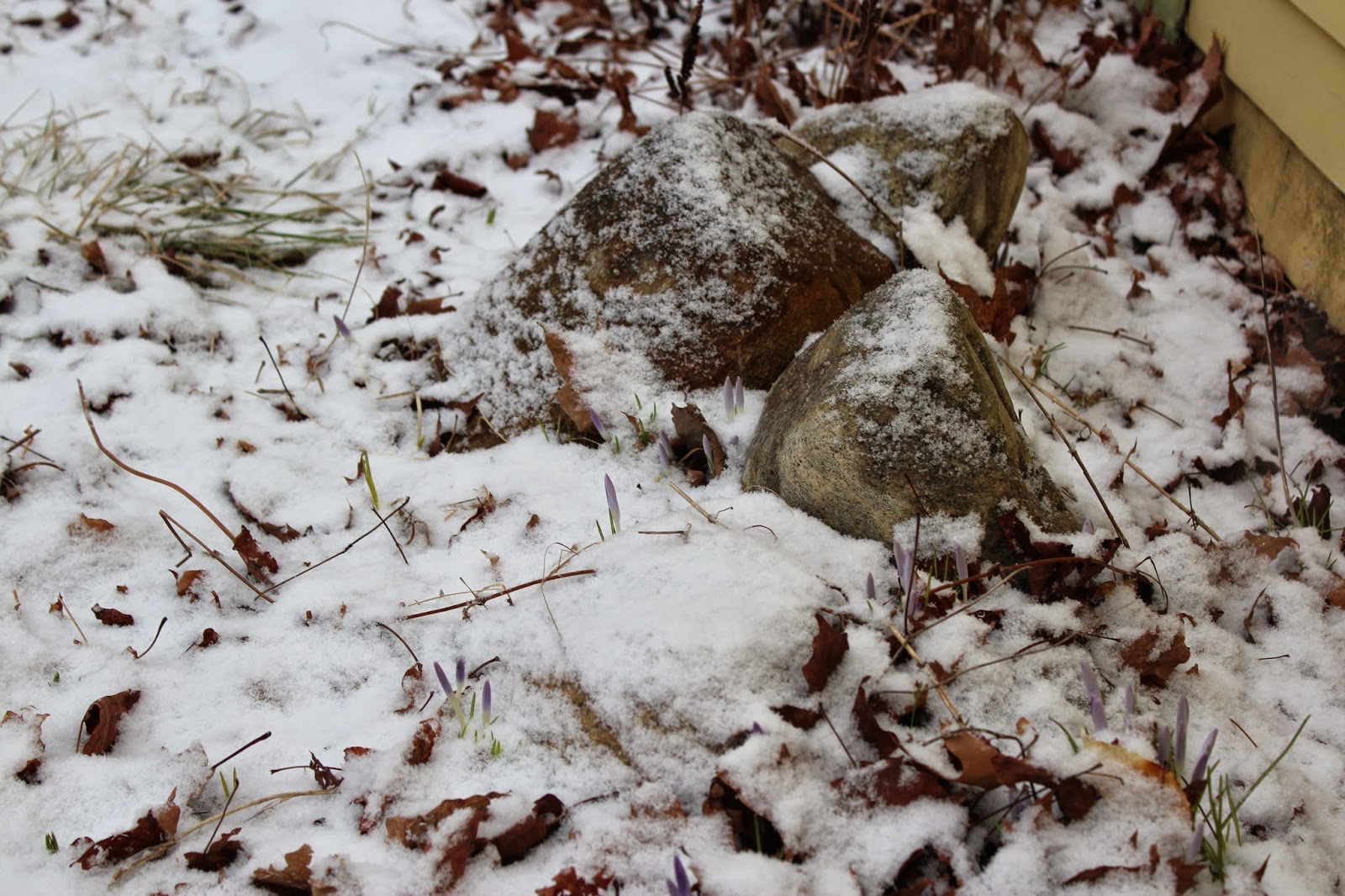 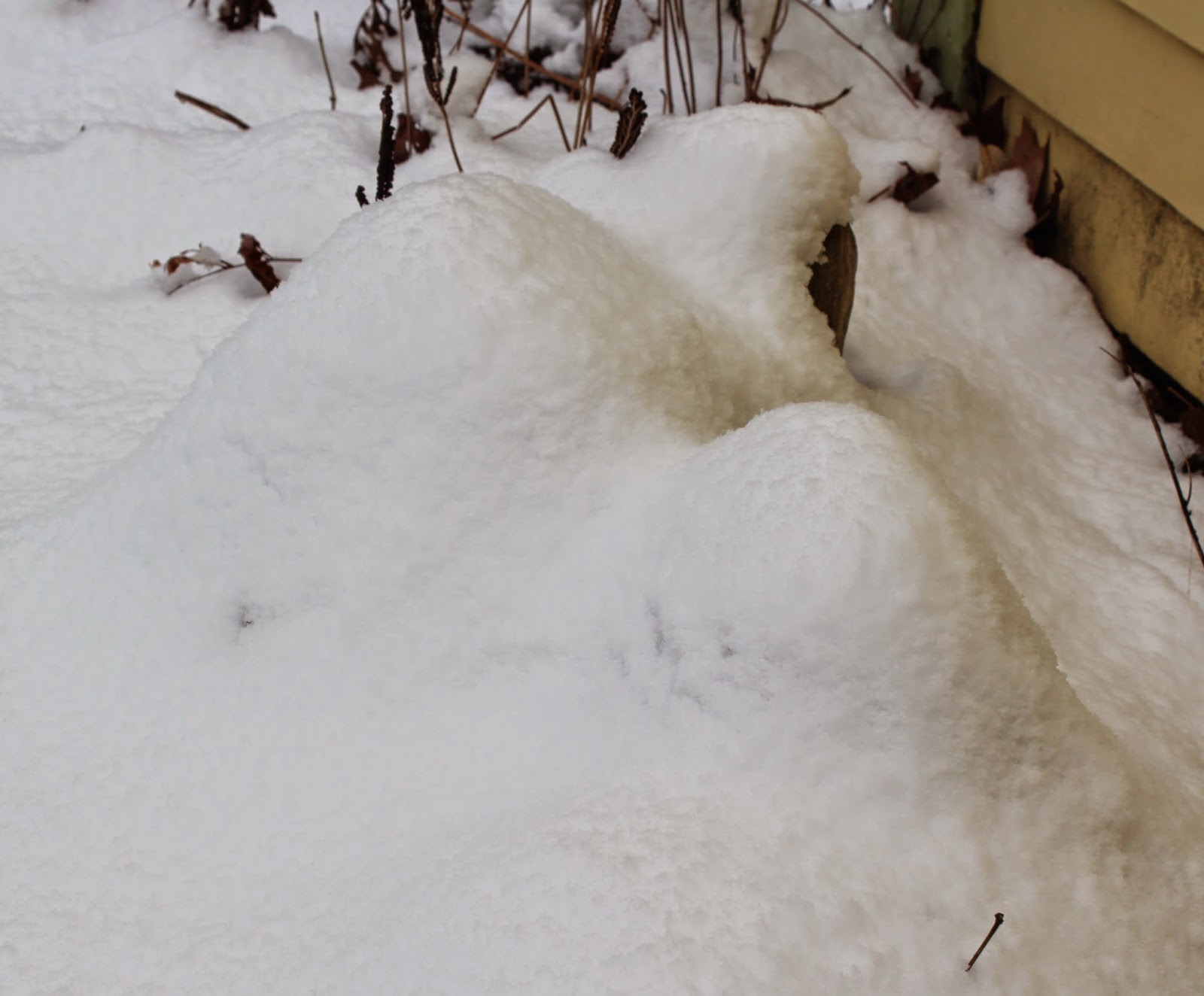 Only one thing to do.

Get that gardening started. 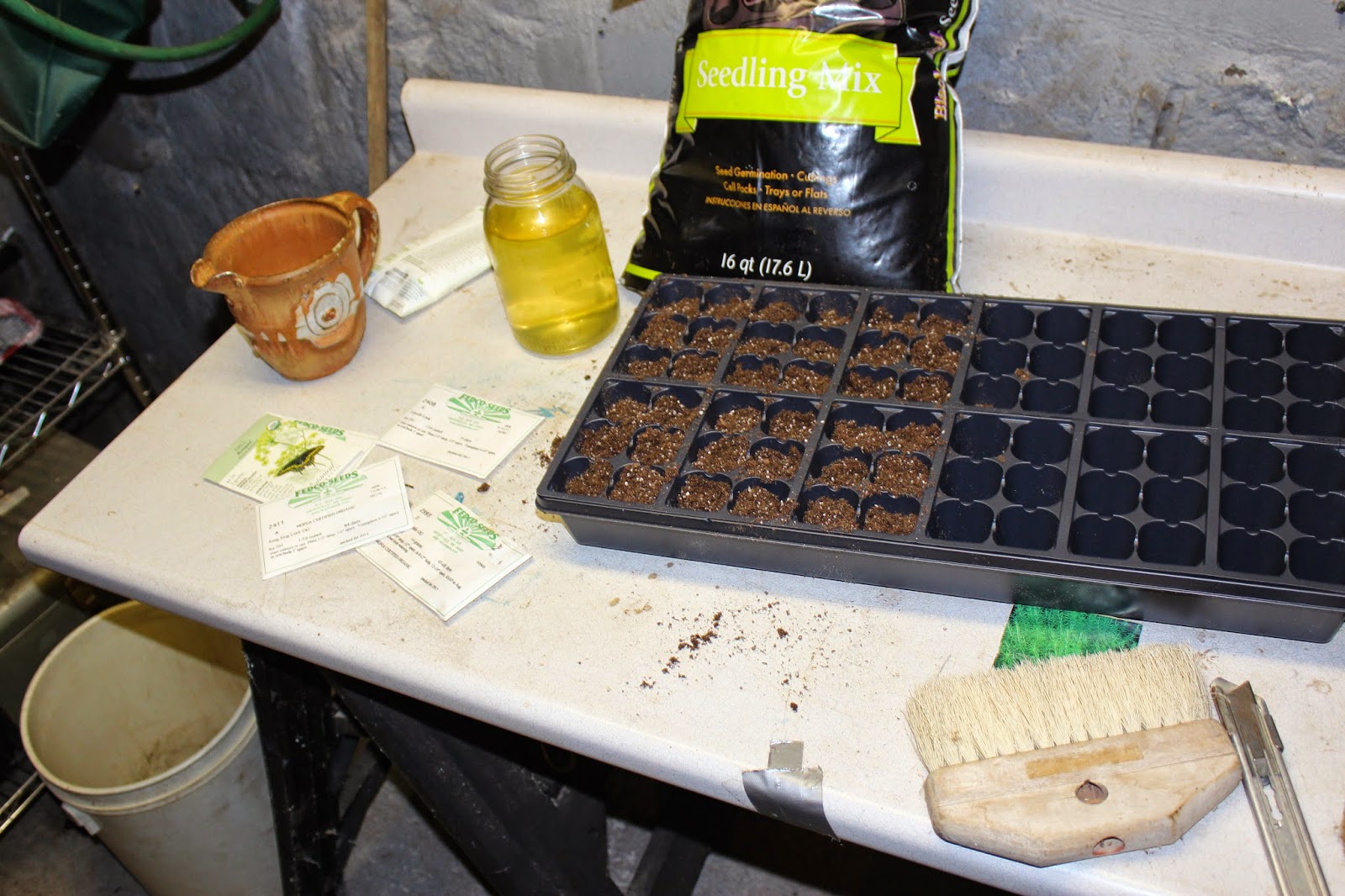 The Flight of the Timberdoodles

Last night at dusk I join a friend at Coogan Farm for the mating flights of the woodcocks.

It's a howling, still-winter night and there are only patches of open ground amid the snow.  Still, as the orange sky above Mystic turns magenta and then blackly purple, the woodcocks begin to make their rapid flights.  Wing feathers whistle in a high-pitched twitter.  They rocket back to their staging areas, and invisible on the ground, nasal 'peeeeeeent's buzz out above the rushing wind - calling to any females nearby on this cold night - to come and admire, to watch them strut and to take a mate.
Posted by Andy Brown at 9:27 AM No comments:

Nearly a month has gone by since I last posted.  I'd like to say it was a seasonally appropriate dormancy, but it wasn't.

In the interim I turned 50.  The second thing I did - after telling Nico to get up for school - was to fall down the stairs - top to bottom in a full-body tobogganing.  I picked myself up and confirmed that I was only bruised, which I chose to look at as a positive omen.  Nevertheless, I threw my old slippery-soled house shoes into the trash.

Monica had gone off to Hawaii - an escape from winter that she and her sisters had been planning for years.  As she explored Oahu and Maui, walking volcanos and listening to whales sing, her phone continued to supply her with a steady diet of winter weather warnings from Rhode Island.

Nico was home busy preparing for his "8th grade assessment", which involves a speech and presentation about service work, which in his case meant assisting with an after-school program in one of New London's public schools.   Mostly I just nagged him to make progress on a painting that he was creating as the "creative component."  He's a very articulate and compelling public speaker, so I had no doubts that he'd handle the committee he'd be speaking to.

At the end of February I left Nico - with the painting finished - staying with friends and traveled to West Virginia and eastern Kentucky on a nine-day trek.  A coalition of non-profits in central Appalachia hired us to conduct ethnography there for insights about how to transition past coal.  So I journeyed through a string of Kentucky's coal mining counties - Knox, Clay, Leslie, Floyd, Pike and into West Virginia - Logan and Mingo counties - talking to people about what would have to happen here for the young people to stay and make lives in these hills and hollers.

In the evenings, when I was all talked out, I plotted out the next day's forays and made sure other projects were on track.  We're in the midst of research about how people conceptualize mental disabilities, and I have interviewers talking with lawyers, judges, wardens, psychologists, case workers - as well as regular people.  Another project is focusing on progressive values.  And groundwork has to be laid for upcoming research on how to talk about the EITC, money in politics, good governance, women's leadership, not to mention the next phase of our work on building a constructive discourse around taxation.

Meanwhile, Monica had returned to the frozen northeast, Nico had handled his assessment, and Porter was flying in for a two-week spring break.  The scattered family was coalescing again.

The videographer who'd accompanied me for the second half of the Appalachia trip made it out on Wednesday morning, but one of the winter's (hopefully last) big storms closed in before I could make my escape.  In Charleston it poured rain and then dropped half a foot of snow - and airports, roads and highways were closed from Tennessee to Maine.  It wasn't until Friday morning that I chipped off my rental car's icy carapace, drove gingerly to the airport, and despite various delays, got launched toward home again.

But not to linger long there.  I had time to do a quick couple loads of laundry and to ready the basement in case warm rains came to suddenly dissolve our two feet of snow.

Porter is finishing up his junior year of high school and so commences the tradition of the college-visit-road-trip (which doesn't seem to have been a tradition back when I was choosing a college).  So on Monday the four of us drove northward, stopping in Cambridge to take a tour of MIT; on to Bath, Maine, where we joined old friends and made new ones over homemade pizza and red wine. Tuesday we toured Bowdoin College and Bates, and stayed with an old friend in Waterville, where I'd long ago spent a couple of years as a professor at Colby College.  Wednesday we toured Colby and in the evening ate fish and roasted potatoes with much wine and conversation.  Thursday we made our way back southward, stopping in Worcester to tour the polytechnic institute there.

Now I'm back home and another day of rain has washed away a few more inches of snow.  The basement is dry.  Tired looking grass is emerging from under tired looking snow.  Porter departed for California to make his way through the rest of the school year.

And I need to order my seeds for the garden!  See if the bees are still alive!  Start assembling materials for a deer fence!

No time for dormancy now.