Over at the blog New to Farm Life, Aimee posts a cri-de-coeur about her frustrating attempt to form an orchard:

"Sometimes I despair of the orchard. I really do. There are so many factors conspiring against trees here; some of them natural, others decidedly of my own making. We didn't site the orchard very well, to begin with. It's right up on the highest part of the property, where the prevailing winds hit the trees full on. The trees in the southernmost row are all hunched over, curled around their own trunks, almost in the fetal position . . . 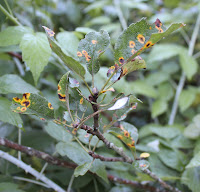 It's amazing, the sheer variety of of pests that have plagued my orchard. I didn't know there even WERE so many fruit tree pests. There are the ones that look like tiny little slugs sticking all over the cherry tree leaves, and that, as far as I can tell by googling, are called "bird-poop worms." There's fire blight on the pears. Caterpillars chew on the leaves and voles gnaw on the roots. Something makes certain leaves turn white; something else makes other leaves curl up. Yet something else shreds them like a hail of tiny meteors. There's white fly and mildew and scab, oh my."

I thought that if I could garden, I could just as easily have fruit trees.  It turns out that's like saying that since I can drive a car - hang gliding will be a snap.  The only fruit tree here above 9 feet high is a volunteer mulberry, but these trees are already a cruel education in casual orchardry. Brown rot withered the peaches (well that at least got me to prune), Japanese beetles made lace of the cherry leaves, the deer pruned the plums and not kindly, raccoons vandalized the mulberry, the black raspberries are making life miserable for the sickly Jonathan apple and the only really vigorous tree, a Macoun apple has decided to call it an early autumn this year for some reason.

Monica's doing a foraging camp with the kids this week.  If she comes up with a good grasshopper recipe - I'm goin' a-harvestin'.

My models for fruit trees were the ancient, feral trees you'd find in the woods or pastures of Pennsylvania - producing apples or pears through decades of neglect.  Or my grandfather's cherry tree, which produced gallons of cherries (mostly for the birds to decorate the property with lavender poop, but still) the thing was productive and all he ever did that I saw was shake his head at the mess.  Sure, I'd seen my father fail at peaches a few times and I certainly knew that part of venison's popularity was one part delicious taste, and one part vengeance for farmers, gardeners and orchardists.  But still.

I've resisted the warfare model of gardening in favor of being an ally to my plants.  I do what I can to help them - little sprouts that they are.  I kind of thought trees would be a little more self-sufficient.  Who knew they'd be so needy?

Email ThisBlogThis!Share to TwitterShare to FacebookShare to Pinterest
Labels: environment, food, garden, outdoors, photos
Newer Posts Older Posts Home
Subscribe to: Posts (Atom)
Do I contradict myself?
Very well then I contradict myself,
(I am large, I contain multitudes.)
----  Walt Whitman
"Song of Myself"