On November 28th, 1963 my parents were married in Galilee, Pennsylvania.  On November 30th, 2013, people gathered in Mount Gretna, PA to celebrate 50 years of that marriage.

They had rented a hall at the Timbers, a nearby restaurant and dinner theater, and about 90 friends and family came together on a cold and cloudy Saturday afternoon to eat and drink and talk.  A buffet steamed.  A slideshow scrolled through the photos and snapshots of a life together.  Their favorite music played in the background.

My sisters had ganged up on me, so when the last of those to get to the buffet were well into their meals, I stood up to say some words about love over the long haul and what I had learned from my parents and their marriage.  And we toasted them heartily with cider and champagne.

My mother, Bea, stood up to say a few words of thanks - and to make sure that people didn't let our talking keep them from eating or getting seconds.  She also deflected some of the attention to other couples in the hall whose 50th wedding anniversaries had come and gone.

My father, Dick, stood to speak.  To general laughter, he told how the night before he'd been desperately spinning out contingency plans for feeding 90 people, because the Timbers was surrounded by a dozen fire trucks from all around the county.  (The chimney had caught fire, though no real harm was done except to my parents' peace of mind.)

When he'd finished, I stood again to encourage people to write their thoughts or stories or wishes in the leather-bound book by the door - but also to encourage them to feel free to stand up and say a few words.

And Eric, my brother-in-law, who I'd enlisted as a ringer, rose and spoke of his admiration for this family, and he got a good laugh with a mischievous quotation of Montaigne's about how the perfect marriage required a deaf husband and blind wife.

Then something important happened.  Pennsylvanians can be very shy about toasts and public speechifying, and I had expected that few, if any, would speak up so publicly.  But one after another, people stood up and spoke - telling a story or sharing their feelings about the couple.

One of his cousins told of how my father was a pioneer and a role model for his set - one of the first to leave the valley and go off to college.  Another told of how their teacher, Mrs. Cogan, used his departure to tell them all about what college was and what it meant.  It was the first he'd every really heard of this idea of leaving the farms and going to university.

Locals stood up to talk about both Mom and Dad as pillars of that community - involved in politics and environmental conservation and charity work.  A former colleague of my father's from down in Lancaster county recalled the respect that Dad had had for the students he taught and what that meant as an inspiration.  People recounted their generosity and openness, or told funny stories of mishaps and misunderstandings.

People who knew them in one setting got to hear how they have existed in these other settings and touched other people in other ways, and I think they were fascinated to hear of it - to see the horizons of these lives extended beyond the part that they had already known and admired.

The dessert was nearly done when the last person had spoken, and we all began to rise and mill about in the smaller-scale visiting of conversation and leave-taking.  Nico said to me that the little speeches were by far his favorite part of the day. 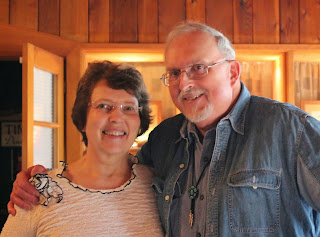