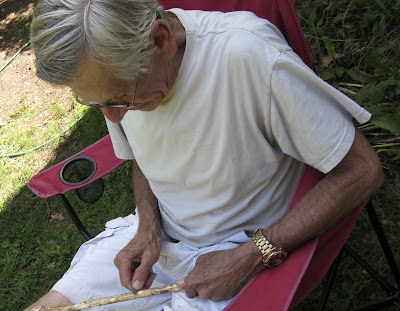 "I used to do the payroll for my brother in the 1950's in Colombia.  He would get the money sometimes in the evening and I would drive the money, something like $20-30,000, out to towns far away, 2-3 hours.  And back then it was very dangerous on the roads.  Not political like today, but just bandits.  And I would drive that truck full speed, never stopping for so much as a drink of water.  He even gave me a pistol to take, but I dropped that it behind the seat.  I was terrified of the thing!  One time I drove something like four hours up into the mountains, and man I was thirsty at the end of it.  I got to the town and I went in to the bar and I asked the bartender, 'Please, sir, could I have a cold beer?'

But there was another man there, a big montanero in a rana and a hat.  And he said, "Oh no, you will have an agua ardiente!  Bartender give the doctor an agua ardiente!"  (They called me doctor because they thought I was the engineer like my brother.  You know I was dressed very well.)

"Oh no sir," I said, "I’m very thirsty.  I drove today all the way today from Medellin."

"You’ll have an agua ardiente with me!" he shouted.  He was very drunk.

So I said, “OK, bartender, give me an agua ardiente!” and I slapped my hand on the bar.

And we said, “Salud!” and we drank.  And then the big man in the rana said, “And now you will buy me an agua ardiente, just as a I bought you one.”

And I said to the bartender, “Two agua ardientes!” and we drank again.

“Now,” he said, “you can have your beer.”  And I offered him to buy a beer, but he said no that he only drank the agua ardiente.  And then I notice that the bartender was standing there with his fists clutched tight looking terrified.  But I went back to the hotel.

The next day we went back to the bar, because usually the director would give out the money in a restaurant or bar and buy the men a drink.  And the bartender he said to me excited, “You are the man who was here last night, no?”

And I said,  “Yes, “and he said, “Oh doctor, I was so afraid for you.  That man, he is one of the most dangerous men in this area.  He’s killed like 5 policemen and I don’t know how many other men.  And last night, when he asked you to drink with him, he had a gun under his rana pointed at you.  If you had refused to drink with him he would have killed you.”

And I said to myself “Jesus Christ!” and I was weak with fear.  A lot of men, especially like the engineers and professionals thought they were much higher than the common people and would have refused to drink with such a montanero and they would have said, “To hell with you!” when he asked them to drink.  But I was not that kind of man.  I was friendly to him and treated him well.  But Jesus Christ when I thought about the gun underneath the rana . . . .