Enoughness and the Age of Consumer Capitalism, part 1


There is nothing more destructive to capitalism than the satisfied customer.

Lately, much of my work professionally is focused on reviving American practices of democratic citizenship, as well as reforming our economic culture and our public policies in ways that are less destructive to ourselves and our world.  There are various dynamics at work, but when I look around at all the various problems and potentials of our era, I've long maintained that consumerism is at the heart of the matter.

I thought I'd make use of this blog to try to flesh out my thinking on the topic, so bear with me . . .

Depending on your priorities, market capitalism can be an efficient way to organize your economic affairs.  Those who possess wealth set up enterprises, and those who don't have wealth must exchange hours of work for a wage.  The desire for a good wage motivates the have-nots to be diligent and ambitious workers and the desire for profits motivates the haves to create goods for their customers in a cost-effective way.  When government is strong enough and democratic enough to set ground rules and make sure the common good is protected to some degree, it's not a terrible system.

For millennia the grunt-work of civilization was done with human and animal bodies, supplemented with the power of falling water and bustling wind, but now coal, oil and gas do the work and ask for no wage other than the effort it takes to get them out of the ground.

It's probably more accurate to call our current system "consumer capitalism," because the energy subsidy from fossil fuels enables a new variant, in which wage earners don't just occupy themselves with subsistence - the reproduction of the workforce - but they secure enough wealth to become key customers in their own right.  And they become a necessary and vital market for the goods being produced.

By the time we got a ways into the 20th century, there was actually enough wealth being produced to ensure material security for everyone, arguably even to a degree of comfort and luxury that would have satisfied an upper middle class burgher from a few generations past.  Leisure and time - freedom from labor and drudgery - had been the privilege of the few, but was now within the grasp of the many.

I ponder what might have happened if we had developed "enoughness" as a core cultural value- if our system had been oriented toward ensuring that people found satisfaction and self-actualization in a materially modest, cozy existence where there was less work and more leisure, more fellowship and edification and less competitive consumption.

But that is clearly not where we've ended up.    Today, instead of free time we have workers putting in 60-hour weeks to pay the rent or rise up the ladder, and mothers dropping their 3-week old babies at daycare.

We have millions of young people medicated and self-medicating to endure a ruthless culture of striving, in which the ability to stay focussed on working and spending are the parameters of life's success. 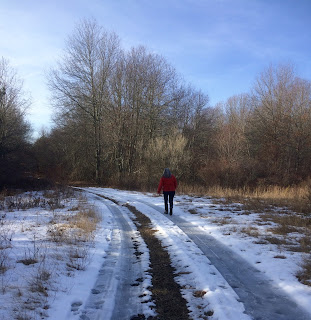 Our time away from work is no longer "free", but instead an effort of consumerist leisure - whether passively consuming media products or actively - and expensively - constructing our identities as golfers or runners, backpackers or Caribbean vacationers, video gamers or stadium tailgaters.

We work long hours for our wages and forget how to do a thousand things our great grandparents could do for themselves.  We've had our crafts and callings taken from us and replaced with things and services that we can buy from our direct-deposit paychecks.

We bring the global poor into our orbit as factory drones, but with the promise that they can soon join us under the bright lights of our consumerism.

Along a different trajectory, within a culture of enoughness, we might have been the beneficiaries of a golden age of prosperity and civilization - or at least achieved some sort of sustainable global existence. Is it so hard to imagine?

Next week, I'll continue my effort to sketch out this predicament - and the ways that our unhappy system is enforced and evaded . . .

Down to the future 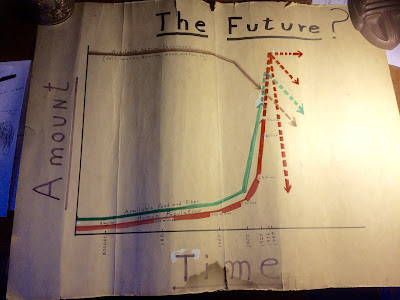 This is an old chart that my father drew up over 30 years ago, around the time I was starting in college, and the global population was 4.7 billion.  The brown line at the top represents available natural resources.  The red line represents population, and the green line, available food.  It makes a simple, straightforward and true point - that natural resources don't increase in the way population and food production have, and at some point in the future declining resources meet ascending demands and so population stops increasing.  Depending on the choices we make it could stabilize or crash catastrophically. 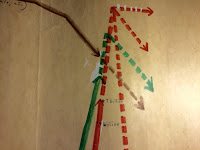 This was true then and true today - as global economic growth starts shuddering to a halt; as soil and water resources degrade; as the anthropocene extinction event continues inexorably; and as climate change inserts itself as a destabilizing wild card.

Nevertheless, after drawing up this chart, my father went on to complete his career and settle into retirement without ever seeing the elbow in this graph.  He didn't join a commune or build a bunker.  He worked and paid his taxes - sent his kids off to colleges and graduate schools, watched them get jobs and found families of their own.  He worked as an educator, activist and community leader to create smarter and more resilient communities around himself, but he didn't or couldn't extricate himself from our doomed and destructive way of living.

I study this yellowed and dog-eared piece of posterboard, as I prepare to usher my own son off to college.  I wonder whether I will retire into a society that continues to tread water despite it's unsustainability - or whether I'll come to regret not joining a commune or building a bunker.  I wonder whether I've given my sons enough resilience to deal with what is coming - the elbow in that chart that we still refuse to prepare for.

In the end, I do much as my father did - work to create more resilient people, environments and communities, keep alive a handful of useful skills including gardening, storytelling, and ecology, and engage with the world we have as best I can.  It's even possible my sons will do the same.  The human ability to muddle along is not to be underestimated . . .

For a complementary rumination upon this dilemma I recommend Brian Kaller's eloquent blog.


In the spirit of making this an annual exercise in humility, here are my 9 predictions for 2016:

Then of course, it is easier to predict the many things that could change, but probably won't.  So folded into prediction #9:
And now is when I note that all of my predictions seem awfully gloomy or pessimistic.  When it comes to optimistic predictions that could be concrete enough to be judged right or wrong a year from now, it's hard to see important trends that are looking positive.

I asked Nico, who just turned 14, what progress he saw being made in 2015.  What were the things that showed us humans moving forward?  For him, the acceptance of gay marriage, improvements in prosthetics and the successes in robotic space exploration (Mars, Pluto, Asteroids) were the main ones that came to mind.  And maybe something would come out of the Paris accords on climate change. Not exactly a landslide of positivity.

For 2016, it seems likely that Black Lives Matter will successfully bend the trend away from ever more lethal policing against minorities.  It's possible that the Republican party's current experiment with extremism, will scare it back toward sanity and toward an engagement in governance once again.   I hold out hope that young people will increasingly seek creative ways out of the consumerist cul de sac they've been led into.

But for the most part, I foresee another year in which we muddle along and fail to solve the problems which are rumbling beneath us like methane bubbles in a melting permafrost.

Email ThisBlogThis!Share to TwitterShare to FacebookShare to Pinterest
Labels: economy, environment, media, musings, politics, sustainability
Newer Posts Older Posts Home
Subscribe to: Posts (Atom)
Do I contradict myself?
Very well then I contradict myself,
(I am large, I contain multitudes.)
----  Walt Whitman
"Song of Myself"