The Warmth of November 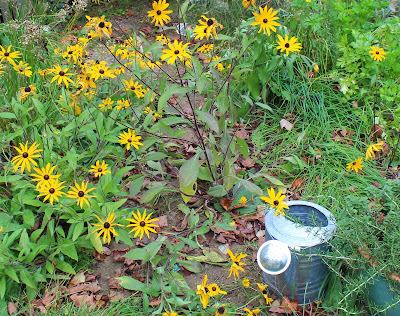 In a few days, it will drop down to the mid 20's here, but today the breeze is warm the the door is open.  We've already had a few hard frosts, but still, a lone dragonfly patrols the yard, and frogs are still on the move.  The compost heap is busily being converted directly into fruit flies.

Most of the brown-eyed Susans wither by the end of summer, but there's a strain in our herb garden that puts out late blooms every year, even against the hard frosts.

A couple of weeks ago, a woman who blogs in Rhode Island was sad to see a handful of swallowtail caterpillars in among her carrots, because they were too small to pupate and the first hard freeze was closing in.  Whatever butterfly had laid in this brood had done it too late to outrun the season.

I was more intrigued than saddened, however.  One of the remarkable things about evolution and adaptation is the way they usually rely on "mistakes" like these.  In New England, Black Swallowtails raise two broods.  The first pupate in a bright green chrysalis and grow to adulthood in the summer.  The larvae of the second brood each form a brown chrysalis (to camouflage with the winter), and they spend the winter as pupae, to emerge in the spring as butterflies.

In the southern US, Black Swallowtails raise three broods, only the last of which overwinters.  As climate change makes the Rhode Island winters more and more like the winters of Virginia, these butterflies, who seem to brood so foolishly and futilely late, will turn out to be the pioneers that exploit a new November.  As long as mistakes like this are being made, there will be individuals to thrive in new conditions and new environments - even changes that race forward as quickly climate breakdown is going to.

It's a lesson humans might do well to learn.  Every time we choose efficiency, optimization,  and an insistence on a single path, instead of diversity and dissensus, we drain a little bit of resilience and adaptability out of our systems.  Resilient systems - and Life is nothing if not a resilient system - are ones that have generous room for mistakes and failures and hopeless experiments.

UPDATE:  And because the food system is a prime example of a system we've made less and less resilient, here's a nice example of what I'm talking about over at Grist: Why more biodiversity means more food security.

Posted by Andy Brown at 2:26 PM No comments:

Email ThisBlogThis!Share to TwitterShare to FacebookShare to Pinterest
Labels: environment, garden, musings, outdoors, phenology, photos, sustainability
Newer Posts Older Posts Home
Subscribe to: Posts (Atom)
Do I contradict myself?
Very well then I contradict myself,
(I am large, I contain multitudes.)
----  Walt Whitman
"Song of Myself"