_
My great uncle Sam died a few days ago at age 85.  He was the last of his siblings; baby brother to my grandmother and her sisters.  Sam Tewksbury was one of the true characters of our childhoods.  A big, shambling man who never had a family of his own, for years he occupied a small room in my grandmother’s house, across the hall from Ya-Ya, the old Danish widow who rented the back apartment.  As a kid, the thing I found most remarkable about him was how he wouldn’t emerge in the morning until after 11.  Then he’d make himself something sweet for breakfast in the dented tin measuring cup that he used for most of his meals (except when he was forced into sitting at the table for one of the big family gatherings).  He was shy and slow with words.  If you asked him how he was, he’d always answer, “Oh, ‘bout the same.”
I didn’t learn how to hold a conversation with Sam until I was 20 years old.  I must have found some patience by then.  If you’d say something to him, he’d respond with a non-committal “hmmm hmmm”.  But if you waited – I mean really waited while a minute or so of silence trickled by – saying nothing, asking nothing – he would give a real response to what you said.  And then you could respond as quickly or as slowly as you wanted and settle in for another long pause while Sam slowly cogitated and formulated his next statement.
I guess his sisters considered him a bit simple-minded, but he never struck me that way.  He repaired televisions and other electronics in the back room of my grandmother’s store, and tended to the customers a few hours of the day.  He never spent a nickel if he could avoid it and he was frugal to the point of pathology.  He let me drive his old gray station wagon when I was 15 and taught me how to save gas by coasting down hills.  There were people who would let him know when a deer had been killed on the roads, so he could gather a haunch for his dog before the vultures got to it.  Whatever cash money he had he played into the stock market, at least that’s what my parents said, since I never heard him speak of it.   Despite the frugality he finally moved out of my grandmother’s house and into his own place (maybe she pushed him out, but the rent was low because the building was condemned and gradually falling down).  A true child of the Great Depression, he never voluntarily threw anything away, and he filled the dark house to the ceilings and heated it with scrounged scrap lumber and rolled newspaper.  Above his entryway he hung a graceful sign that said “S TEWKSBURY”.  It was an uncharacteristic flourish and I asked him about it.  He told me it was his parents’ “TEWKSBURYS” sign that he’d split and re-arranged.
Maybe his judgment wasn’t always the best, but I’d play Sam’s assistant even when I didn’t understand what we were up to.  I remember hunching behind wooden shields up by the barn while we attempted to break old television tubes by hurtling rocks at them (He vaguely explained about them being toxic and a bit explosive).  I think my sister Chris has a couple of scars on her leg from helping him with soldering television cables.  And I spent at least one afternoon shimmying up trees  with an old car seatbelt to check on cables he had run up over Tyler Hill for some reason.  Other times it was just to drive out to gather beechnuts or pick apples in abandoned fencerows, or to let the dog hunt for groundhogs.  On those outings he kept a small acetylene torch handy for tent caterpillars.  He was a tremendously gentle man, but he bore a strange hatred for tent caterpillars.  It seemed to bring him great satisfaction to watch the silk retreat from the blue flame and the singed caterpillars come tumbling out.
But Sam was always good to me.  On summer afternoons, when we were visiting, he’d gather up his little collection of short, odd-shaped baseball bats and his flat, ancient ball glove and we’d go up to the little league field to hit the ball around for a while.  Even in his 50’s he was pretty good.
_
Posted by Andy Brown at 9:05 PM No comments:

_
Here's Congressman Jim Shimkus of Illinois, who is jockeying to be chairman of the Energy and Commerce Committee.  He assures us that it's wrong to worry about climate change or human's destroying the Earth, because God, not man, will bring about the End.

Before the next election we will be dunking witches . . . . 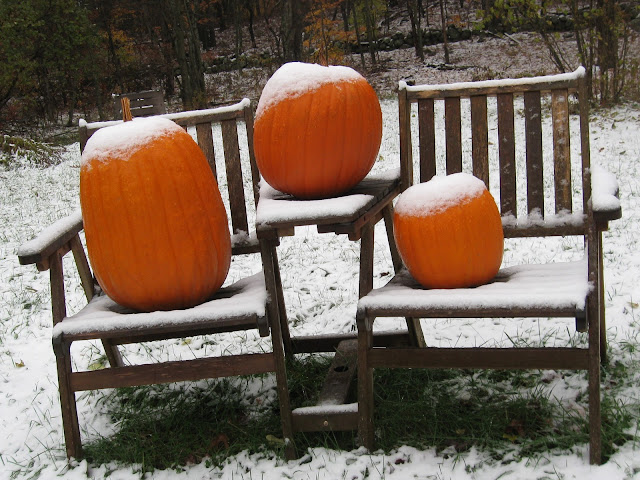 Posted by Andy Brown at 3:52 PM No comments:


Nico, three of his classmates, plus a couple of younger students traveled down to Fairfield county to play chess in the tournament there.  It was first time for all of them, but they dominated among the unrated players, taking 5 out of the 8 top slots and walking away with team honors. 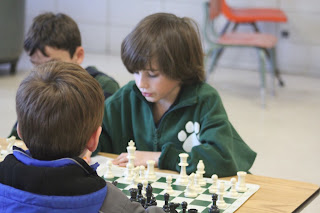 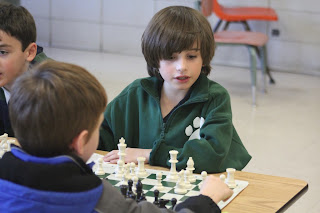 Good for them.
Posted by Andy Brown at 3:51 PM No comments: 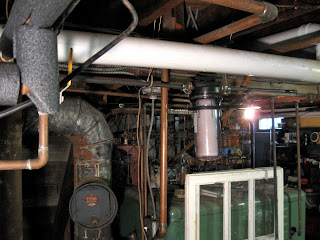 Porter was helping me staple up some insulation in the basement, and the neighbor kid, Jake, was hanging out with us.  I'd promised to take them bowling after lunch.


The man who built the house in 1950, Vernon Kendall, hadn't been a stickler for measuring so no two studs are spaced the same.


While I carved pink insulation with a hunting knife Jake and Porter surveyed the ceiling, trying to interpret the overlapping networks of plumbing, electric, heating pipes, phone cable and pvc that 60 years had laid in.


It's not an easy map to read, the circulatory system of an old house.  Conduits are added with none ever taken away.  There's some kind of elaborate alarm system that I still don't understand and a sewer pipe to nowhere. 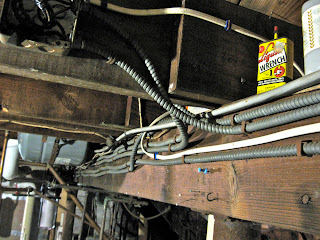 They searched for treasure atop the beams and on the foundation wall between the joists.  Mostly they found old tubes of sealant or lubricant, decrepit fan belts, tin boxes, pipe connectors, the odd pressure gauge or clamp.  A bumper sticker for a tent revival.  Stuff like that.  I had to explain to them how the blade-butted spout for an old oilcan worked.


Jake dismantled my broken telescope.  Then they found real treasure, my uncle George's old archery gear from the sixties.  They quietly put the stuff away, but I know that unless I remember to forbid it, it will all eventually disappear into the woods, like the last generation of arrows and bows, just like my ducktape, nails, bungee cords, tarps . . . .

Posted by Andy Brown at 1:26 PM No comments:

Email ThisBlogThis!Share to TwitterShare to FacebookShare to Pinterest
Labels: Porter

_
Fred Clark at Slackivist makes an good point about why the barkers for climate change denial have had such blazing success and why the scientific facts about global warming have failed to sway the public:


[One] framework that I'm convinced plays a large role in American climate-change denialism is the quasi-religious desire to believe that harmful consequences can only result from deliberately malicious actions. If climate change were shown to be the work of a clearly identifiable villain -- something more along the lines of the pollution narratives of A Civil Action or Erin Brockovich -- then [people] might be more receptive to the idea. But they cannot accommodate facts that suggest the possibility of calamity due to the aggregate effects of billions of mostly innocent decisions. This particular delusional framework defends itself aggressively because a great deal is at stake for those who subscribe to it.

Clark's main interest is in the religious imprimatur on this, but I think he's exactly right that climate destabilization conveys a narrative that simply violates peoples expectations of justice and sense -- and at a deep cognitive-emotional level, people don't like that.  And as we know, people are motivated to not hear things they don't like.


Climate change denialists have worked to widen the chasm between climate scientists and the lay public when it comes to their understandings of what is going on.  Physical scientists (at least the good ones) really don't expect the natural laws they study to adhere to our arbitrary expectations of justice or right or narrative tidiness.  But because regular people DO have those expectations about the world they live in, the scientists seem to be offering a world that is not only physically in dire straits, but also a world that seems devoid of moral sense.  They tell a story where living a normal, even virtuous, life is going to destroy the planet.  The denialists, on the other hand, offer a world that not only is in no physical peril, but where vice and virtue are more sensible and human-scaled.


Advocates have been struggling to accommodate people's desire for this moral sense.  Sometimes they stress the virtuousness of individuals changing their lightbulbs or driving less, or they invoke moral ideas of stewardship.  But so far that's been a rickety foundation for a re-making of the global energy and economic systems.  Alternately, (and this is what we have mostly worked on) we can try keep the moral issues to the side at least long enough to enable people to understand climate change as a straightforward, technical problem.  Too much CO2 in the atmosphere is thickening a heat-trapping blanket - so we need to either reduce our carbon emissions or get the carbon out of the air.  That's the technical challenge.  It won't be easy, but that's what we have to do, and no amount of denial or procrastination is going to change that.  As far as moral narratives go, once this technical groundwork has been laid out, there is room for plenty of moralizing about what it means to make the hard changes as opposed to continuing with business as usual.

Email ThisBlogThis!Share to TwitterShare to FacebookShare to Pinterest
Labels: environment, musings, politics, sustainability
Newer Posts Older Posts Home
Subscribe to: Posts (Atom)
Do I contradict myself?
Very well then I contradict myself,
(I am large, I contain multitudes.)
----  Walt Whitman
"Song of Myself"