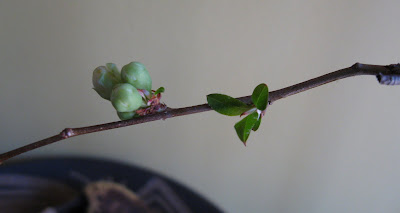 Monica snapped a twig from the quince and set it in a vase.

The swelling buds and blossoms are a cheat, of course, but then, winter never plays fair either.
Posted by Andy Brown at 4:50 PM No comments: 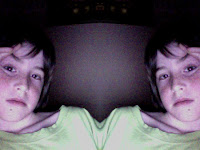 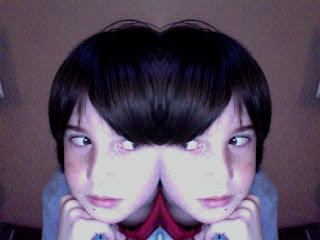 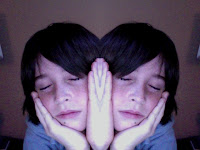 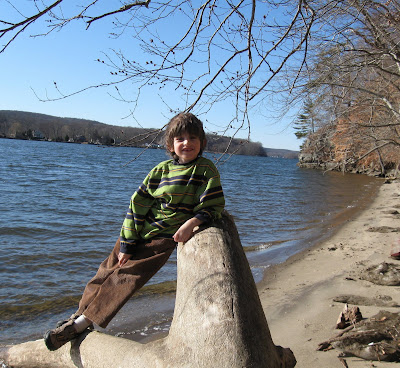 On Sunday we had brunch in Essex at the Griswold Inn.  Nico especially loved the old, cluttered space.  Mmmmm . . . waffles.  A man on the town green was carving eagles from wood with a chainsaw, making a racket and a stench and an entertaining spectacle.  In the harbor the ice was melting and a flock of mergansers preened not far from a bald eagle strolling along the ice-edge.
We drove northward along the Connecticut river, stopping briefly at the winter carnival in Chester.  Crossing the river at the Goodspeed Opera House, we made our way down to Gillette Castle.
From the cliffs Monica and I watched the eagles that over-winter there, while the boys raced around the grounds.  It's stunning to watch the great birds as they ride the air currents and hunt for fish in the river. 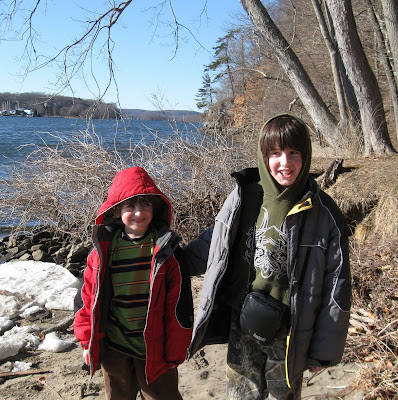 Posted by Andy Brown at 1:26 PM No comments: 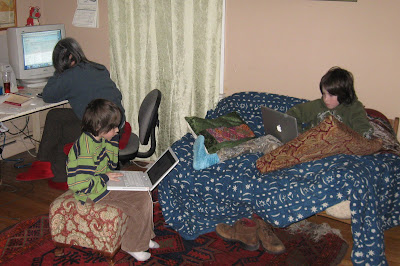 Posted by Andy Brown at 1:22 PM No comments:

I spent the evening filing a couple of months worth of household bills, reports, receipts, bank statements, pay stubs and so on.
They used to view the Cold War as a great contest between opposing ideologies -- the capitalistic open society versus the communist closed one.  But in reality each Weltanschauung (such as it was) lost out to the reigning ideological practice of the 20th century -- bureaucratism.  It is the bureaucracy that won.
And now, the struggle for the soul of the 21st century is not really West versus jihad or state versus terror.  It's about the valences of bureaucratism: two extreme and contrastive versions of the praxis.  On the one hand there is the bureaucracy as a utilitarian construction for a rule of law, procedure and objectivity -- something that could conceivably serve to bolster equality and even the common good.  (This is the reason why bureaucracies are created in the first place -- so that people get treated "fairly," and according to the rules.)
On the other hand, there is bureaucracy's capacity to serve as a framework for cronyism, corruption and just another arena for Machiavellian power play.
In the American version of this, the Bush administration exemplified the latter valence.  Their impatience with the rule of law and their co-opting  the offices and regulations of governing to enrich themselves and their cronies may pale in comparison to China or Nigeria, but they are radicals by our standards.  The EU is probably the mirror image of this, with all its elaborate institutional contortions meant to bleed politics dry.
In a sense, if Al Qaeda actually were to exist as they portray it, its true radicalism would be not in its tired Islamicist posturing, but in its frightening effort to bureaucratize the practice of international terror.
Food for thought in any case.
Posted by Andy Brown at 2:42 PM 1 comment:

If I were going to do something utterly and fatally insane, it would be this:
wingsuit base jumping from Ali on Vimeo.
Holy crap.
Posted by Andy Brown at 8:48 AM 1 comment:

When I was ten years old, growing up in Pennsylvania football country, the Steelers beat the Cowboys in one of the great Super Bowls of all time, on the pounding of Franco Harris and the artistry of Lynn Swan.  That kind of thing imprints itself upon you.  Last night history seemed to come full circle as we sat before the screens at C.C. O'Brien's with 10-year old Porter screaming at Big Ben, "Throw the ball!  No!  Throw the ball!"  And the hundred yard interception return?  Good God, I think Steeler nation was as prostrate at the end as Harrison was.
Porter spent some formative years in Cork where hurling and Man U reigned supreme, and then, since we've been back in the States, we haven't hooked up the TV.  So he's football deprived and maybe he won't have developed that section of the brain that is irrevocably susceptible to the sound of helmets clashing and the sight of big men in tights.  But, at least for last night's gridiron thriller he was as crazed a Steelers fan as a father could hope for.
Posted by Andy Brown at 10:34 AM No comments: