_
I was always struck by the fact that the Soviet Union and other Communist countries went to the trouble to send poets and artists to prison.  Generally, poets and artists in the US can only dream of being taken seriously enough to trouble the powers that be.  I chalked it up to European culture or totalitarian paranoia, but I suspect there was more to it than that.  Most communist systems, once they were well established and bureaucratized, relied on a rigorously enforced pretense that everyone was on board with the utopian project of building socialism.   Depending on how fragile they were feeling, the state might at various times attack or ignore forms of private resistance, like kitchen table dissent, Schweikism, or gray marketeering, but in public the consensus was always supposed to be inviolable.

Poets and artists often couldn't resist violating that pretense with their satires and critiques and their play with multiple and alternate meanings.  And that was a mortal threat to the Communist system.  Once people dropped the pretense of consensus about building socialism, and once each person could publicly acknowledge that "Yes, I too have noticed that our system might be viewed a rotting betrayal of every principle that it pretends to espouse," then the system threatened to become unworkable or even collapse.

That's why I find this tale of artistic suppression in Wyoming so fascinating.  Chris Drury had his work dug up and burned, because his critique threatened the public silence that powerful people are trying to enforce about climate change.  The installation, Carbon Sink, was constructed out of coal and the remains of trees killed by bark beetles, and was interpreted by officials as a concretized indictment of the destruction of our climate and our life support systems through a blind addiction to fossil fuels. 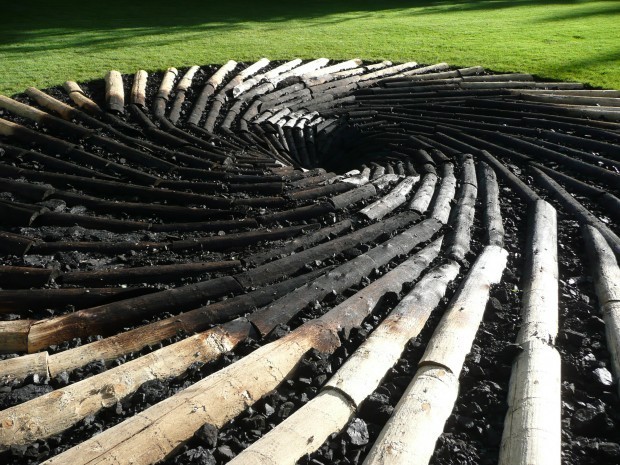 The artist says he hoped to bring about a conversation concerning the costs of fossil fuel use, but it turned out that that conversation was not to be sanctioned by any kind of publicly supported body, not even a university.  Powerful energy companies used their political and economic power to pressure administrators to tear it up and burn it.  Legislators lambasted and threatened the university for its dissent from fossil fuel orthodoxy.  The work was to be erased and forgotten, and so it is gone.

Two Presidential and one Vice-Presidential debates have passed with not a single mention of climate change.  The coverage of global warming in the corporate-owned media has fallen to absurd levels, even as drought and heat waves dessicate vast swaths of the interior of the country.  But despite this silence, gardeners, skiers, birdwatchers, city councillors, hunters, and anyone who takes note of the weather and the seasons, have seen that the climate is changing.  According to recent research, the majority of Americans now view climate change as real and as a real threat to this country.

For now, however, that private realization is not a public acknowledgement -- there can be no official, public conversation about this, and that is why officials in Wyoming react to a work of art in the style of Soviet bureaucrats.  The suppression was ham-fisted -- and it exposed their weakness as well as power.  For now, I will take it as a good sign that an artist wanting to prod a conversation, was able to provoke such a histrionic reaction from the defenders of the status quo in Wyoming.

Email ThisBlogThis!Share to TwitterShare to FacebookShare to Pinterest
Labels: anthropology, environment, musings, politics, sustainability
Newer Posts Older Posts Home
Subscribe to: Posts (Atom)
Do I contradict myself?
Very well then I contradict myself,
(I am large, I contain multitudes.)
----  Walt Whitman
"Song of Myself"