_
It's been over 20 years since Monica last visited her relatives in Colombia.  The boys and I have never been.  But the tias have been saying to her for a while that she has to come visit because they'll all be dead soon.  So tomorrow we head down to New York to stay with friends and then first thing Monday morning we fly to Colombia for three weeks -- our big trip for this year.  I'm not too clear on what we'll be doing exactly, but spending time in Medellin and in the fincas outside of town.  We'll spend time with profusions of aunts and uncles and cousins, and I'll wish I'd studied Spanish like I'd planned, and I'll have myself a cultural experience of some kind or another.

_
Because the grandparents complain that I don't post enough pictures . . . 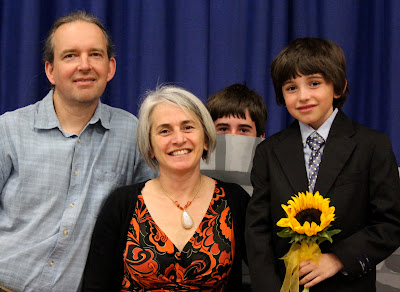 Nico moved from the Lower School to Middle School.


And I was teasing Porter about inheriting the '97 Saturn
when we get a new car and he turns 16.


He thinks he can hold out for something better. 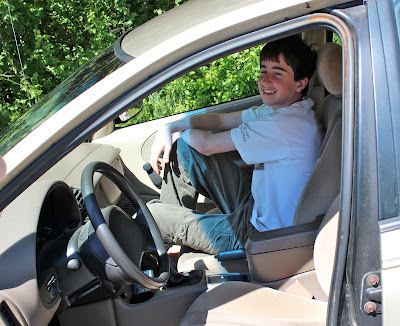 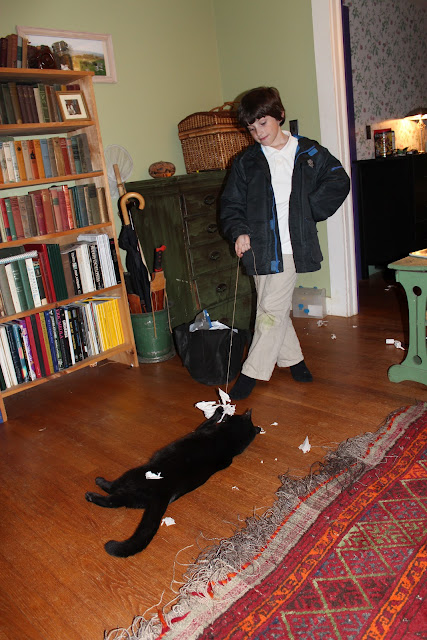 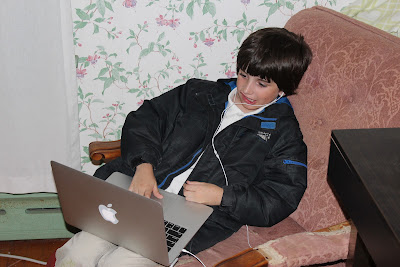 Posted by Andy Brown at 9:13 PM No comments:

_
I was at the local hardware store buying a few things, including a coil of hose to replace the one that Porter ran over with the lawnmower last fall. (Though admittedly the bits have come in handy for a dozen little projects.)  And I was talking with one of the women who work there, and she told me how she'd had to replace her hose because a raccoon hadn't been willing to let them out of their house and so her husband had blasted it with the shotgun, which had done for the raccoon, but had had some collateral damage as well.  How a few days later her husband had called her all annoyed, saying "What did you do to the hose?" and she answered, "Why?  Is it acting like a sprinkler instead of a hose?" and he said, "Yeah, what did you, uh, mmmmm, uh never mind."  And she laughed with satisfaction.

You just don't get service like that at the Home Depot.
_
Posted by Andy Brown at 12:02 PM No comments:


Man . . . who seem’d so fair,
Such splendid purpose in his eyes,
Who roll’d the psalm to wintry skies,
Who built him fanes of fruitless prayer,
Who trusted God was love indeed
And love Creation’s final law—

Tho’ Nature, red in tooth and claw
With ravine, shriek’d against his creed—

For me, there are many, many reasons to garden without pesticides and synthetic fertilizers, not least of which are the chemicals that I don't care to ingest and the corporations who make and market the stuff.  Gardening organically also calls for certain kinds of attention and knowledge and attitude that I find interesting and appealing.  You have to pay attention to what's going on down there or your plants can quickly end up devoured by your competitors.  It may happen anyhow, and such is life.

But I have to admit that I take a kind of bloodthirsty pleasure in the carnage that takes place in the garden. Spiders spin their traps or stalk their prey; wasps of every size and temperament patrol constantly; harvestmen pick their way slowly through the foliage; dragonflies careen through the airspace.  Catbirds, phoebes, chipping sparrows, wrens, swoop down to snatch the caterpillars.  I go out and I do what I can to help.  Right now I'm picking off the tortoise beetles and killing the cucumber beetles - and I'll do more of the same once their larvae hatch.  I'll put out beer for the voracious slugs.  But I like the fact that any leaf-muncher has to navigate a nightmarish scene of predation and danger - and the same goes on underground out of sight.

When we use pesticides we can devastate the munchers, and there's a clear, momentary satisfaction to that.  But we also devastate all these predators.  And it is a truism of nature that prey always reproduce faster and more nimbly than their predators do.  Gardeners who rely on chemical warfare and who destroy these allies, fall into a trap.  If they let up on the chemicals, the munchers can invade in vast numbers, without any natural enemies.  Waiting for the predators to re-establish themselves can mean a whole crop lost.  So I look with pleasure and satisfaction at my active, murderous allies among the leaves of the garden.

Now if I can just train the cats to murder the voles but leave the toads and garter snakes in peace I could consider them on board as well.
_
Posted by Andy Brown at 9:46 AM No comments:

Email ThisBlogThis!Share to TwitterShare to FacebookShare to Pinterest
Labels: environment, garden, outdoors, poetry, sustainability
Newer Posts Older Posts Home
Subscribe to: Posts (Atom)
Do I contradict myself?
Very well then I contradict myself,
(I am large, I contain multitudes.)
----  Walt Whitman
"Song of Myself"