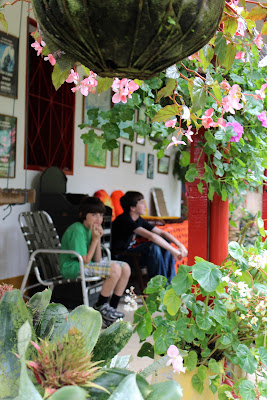 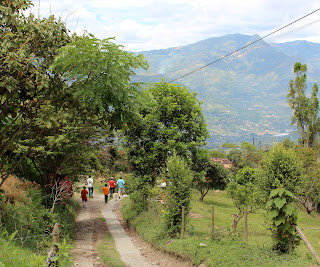 German and Claudia's home is recently built, but in traditional style, up in a valley above Copacabana.  They raise some food and keep their horses, but he also commutes to the city every day as an engineer.  Claudia is an artist and designer.  The two of them are cousins that Monica had known back in her visits as a teenager.  Now they have a 16-year old son.  They invited us out to their place for a few days at the tail-end of their own vacation.  Nico loved the house -- it's rustic style with high ceilings, rough wood, and exposed beams - the bold colors and the bass-relief pictures on the walls. 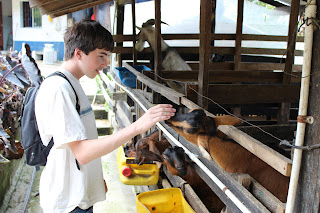 After breakfast German led us up the valley.  3 of their 4 dogs came along, which pleased Porter.  The broken roads bear an occasional car, more often a small motorcycle, but most of the traffic is on foot or horseback.  Scattered fincas dot the area, but mostly it is a mix of woods and fields -- the steeper pastures are terraced by the heavy hooves of cattle.  At a ford, where a storm had finally ruined the road entirely, a large purplish crab brandished its claws at us, before slipping into its crevice.  We halted our climb at a working finca -- milk cows, chickens, turkeys, ducks -- but mostly goats.  We visited some of them in their stalls and the kids snuffled and nipped at the hands of Nico and Porter.  Farm workers bustled around cleaning milk cans and tending to the animals.  We settled on the back veranda and ate fresh cheeses that were delicate and delicious.


One the way out we startled a herd of cattle being driven in.  Most stampeded thunderously past Porter and I, their eyes rolling, but a few turned skittishly and bolted.  The horseman had to gallop furiously back after them. 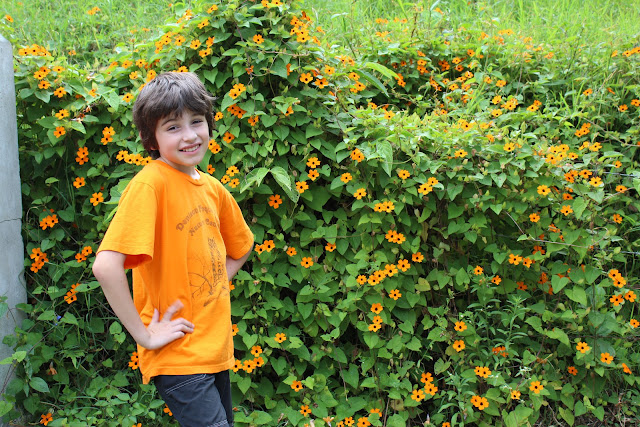 The following day was a trip through the country on horseback.  German and Claudio have horses for themselves and Juan Pablo, and they arranged the rental of another six, since Claudio's brother Arturro and his son Nico would be riding along as well.  As the horses were brought into the yard, Porter was anxious to get going, but Nico was just anxious.  So Monica and he got a pair of placid animals, and she'd be leading Nico's horse on a tether.  Turro would be carrying his little step-daughter Luciana and he got a lively dappled white.  As for Porter, the second Nico and me, the horses we got were not the calm, dispirited animals of the usual horse rental.  These were energetic, high-spirited Antioqueño mounts that wanted to run - not walk - and they were going to compete for decision-making powers.  My horse, (Regalo is what I named him in my mind), was the wildest, rearing up whenever the handler tried to lead him, and tossing his head violently at any touch to his bridle.  But he was the one strong enough to carry the big gringo.  I thought to myself, this could be a very short trip. 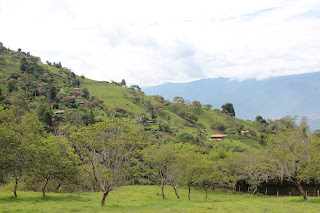 Right out of the gate things went haywire.  Porter's horse bolted down the steep concrete and rubble road with Juan Pablo close behind.  Nico (the second)  was fighting to control his horse and mine was rearing as I tried to stop it racing after Porter.  10 minutes later, by the time the group paused at the first road crossing - (I was happy to see Porter actually still on his horse) - Regalo and I were furious and frustrated with one another.  He trotted up to the others, but instead of stopping, turned and climbed up concrete steps into a (fortunately empty) cafe.  There are many things I don't know about riding horses and getting one to back up out of a cafe is certainly one of them.


In the course of our three or four hours of riding, I wouldn't say that Porter, Nico (the second) and I ever really got full control over these horses.  Porter concentrated on staying in the saddle and let the horse run when it wanted.  My horse had only one pace and it was to accelerate, 10 seconds from walk to trot to gallop to run -- and he hated my reining him in.  I would only let him go when I could see an uphill ahead, because I had no desire to see how fast this horse could really race on the level, or god forbid, a downhill.  Our route was a mix of concrete road -- either full or of twin wheel-tracks, gravel or mud trail.  The occasional truck or bus was the main traffic hazard, though they were usually careful around our barely controlled mounts.  By the end I was sore and tired, but my horse was soaked with sweat and heaving -- still trying to run up those hills even to the end.  And I learned a new Spanish word for the two of us, molido, to have gone through the mill.


But they cured us as Colombians will -- with grilled meat and aguardiente. 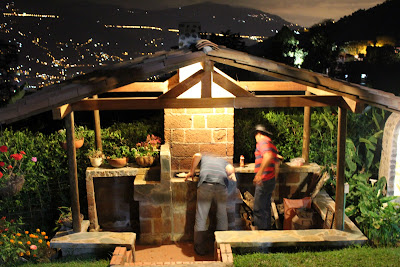 Just across and down the road is the finca of Monica's grandmother -- now maintained by the Tias Gallego.  The Tias were in Medellin, but German had the key and we walked in gardens that Monica remembers playing in.  And we said hello to Lorenza, Alberto's parrot.  Everyone seems to agree that the parrot dotes on Alberto and has a violent dislike for Esperanza.  At the moment, Lorenza was subdued, because her cage-mate had died recently.  But Porter has a way with animals and had her chuckling by the end. 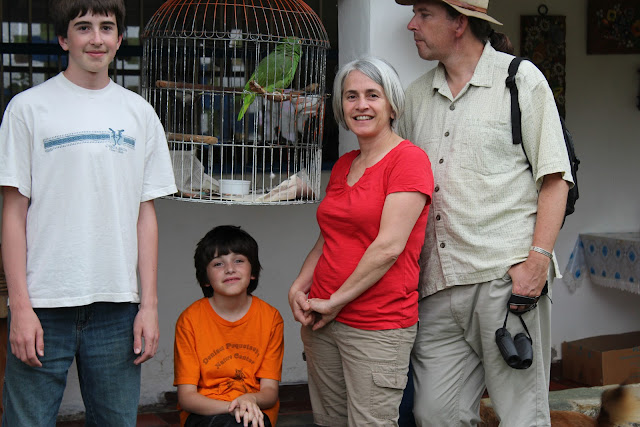 The very next day we were all the way south, past Medellin and Caldas to the finca of Olga's family. 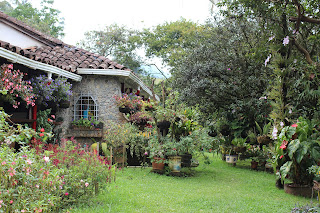 I doubt I've seen any house in Colombia that isn't decorated with flowers, but Olga's finca above the Honey River (Rio Miel) is a work of art in plants and flowers.  If her elderly mother has a green thumb, they have obviously found a caretaker with an equally green thumb, now that she doesn't come out as often.  (Though Esperanza, who like her cousin Olga loves the place as an artist, gives more credit to the perfect climate.)  The place is dense with flowers and greenery -- and vegetable gardens as well. 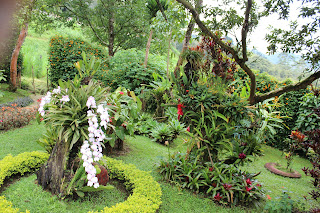 Thick walls and low ceilings characterized the traditional construction.  There were hung pictures of family and paintings and a collection of stylish straw hats worn by her dapper father, Emilio.  But it is the orchids and bromeliads and plethora of other plants that draw one outside into the lushness.  Hummingbirds and swallows flitted.  Large brown and gold oropendulo squawked in the plantains, while red-bellied grackles foraged down by the river.  Our visit there was too short, I think. 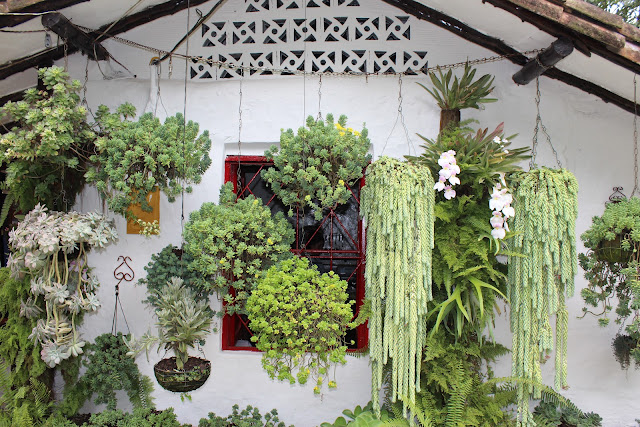 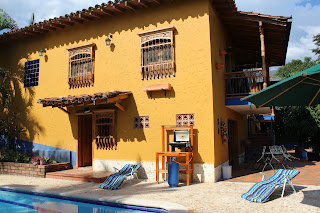 That evening a different kind of finca awaited us in San Jeronimo -- more luxurious vacation home than the family hideaway.  Unfortunately, it was a low point for me in the travels.  I was tired from all the meeting and visiting we'd been doing -- feeling overfed, overdrunk, exhausted by struggling to wield my very bad Spanish.  I was in serious need of a break from being at the center of attention -- and certainly no longer capable of being a good guest.

But weekend plans had been made, and Esperanza, Alicia and Olga had driven us out of the valley.  My spirits sunk as we rose up away from the town of San Jeronimo, past a couple of resort-hotel complexes, through a manned gate and finally past a second gate into a development of modern vacation fincas.  When we arrived and it became clear that the house wasn't just occupied by the cousin who'd been mentioned, but a second cousin, and Jorge the husband, Jorge's two sisters, some teenage children, and a couple of dogs -- and that there was going to be a cookout and drinking, I just declared that the pollution from our drive (which had indeed been horrific getting out of Medellin) had made me queasy and I escaped to our room where I stayed much of the evening. 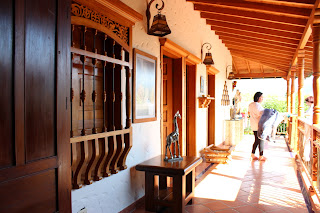 In our two days there, I skipped some meals, ate sparingly otherwise, drank no alcohol, and made no effort to get to know these people at whose house I was staying.  The teenagers had a PlayStation, so Nico and Porter were entertained with gunning down terrorists or something.  When dragged away from that they swam in the pool.


But even if we were bad guests they were good hosts.  Sunday morning, they took us to see Santa Fe de Antioquia, a beautiful, well-preserved town from the heyday of the ranches.  And Jorge taught us the best ways to knock fruit out of trees.  And on Monday they led us on a long hike up through jungle pastures to a swimming hole beneath the wreckage of an old dam.  And we swam in the chill water.  There, I think, I was finally cured of my road weariness. 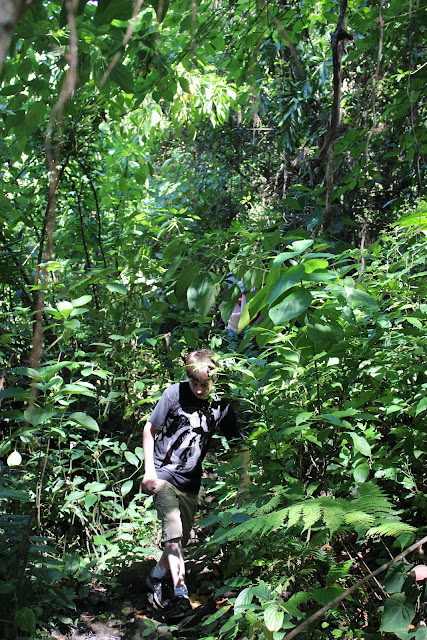 Posted by Andy Brown at 2:04 PM No comments: