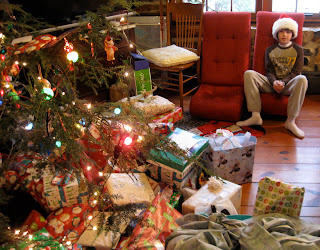 On Christmas eve Monica cooked her roast pork.  Rubbed with olive oil, breadcrumbs, garlic and rosemary, cooked in it's own juices; baked red potatoes with butter or with the juices from the roast; asparagus and sauteed dark mushrooms; unsweetened apple sauce on the side; red wine and cider.

On Christmas morning, the boys can loot their stockings as soon as they get up (this year at 6:45), but the opening of the presents happens after breakfast.  Fred had brought in bagels and lox cream cheese from Brooklyn with him.  Chris had made banana bread.  Cathie cut open a pannetone she had made with white raisins.  There was black coffee and hot tea. 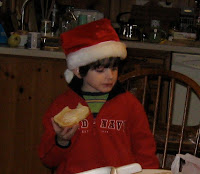 For the desultory grazing that served as supper, Cathie baked fresh breads and laid out several wonderful goats' cheeses that she'd made.  Chris produced a rich camembert.  The cookies, breads, pannetone from earlier all re-emerged.  Cathie's gift to me, a bottle of 15-year old Laphroaig, was opened. 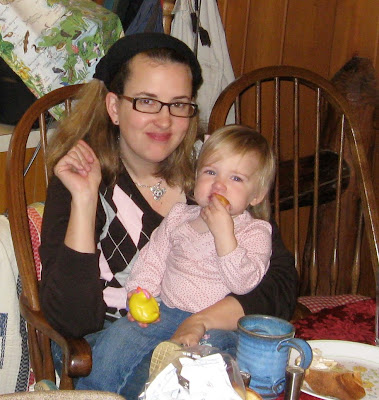