_
I'm lying on my back on a sled by the climbing tree.  My jacket is under my head as a pillow.  The sun, which heaves itself a little higher every day, is warm on my face.  Today is one of those outrageous lapis lazuli skies.  A foot and more of snow is on the ground.  The frantic flocks of birds that were zipping and flitting and fretting around the bird feeders in yesterday's snowstorm are gone.  I'm staring up at the dapper nuthatches that are scampering in the branches.  Chickadees and titmice make occasional flights to the bird feeders for a sunflower seed.  A tiny, cryptic brown creeper is also poking around in the lichen and bark crevices.  I watch him work his way out the branch I'm under until my neck gets tired and I turn back to face the sun. 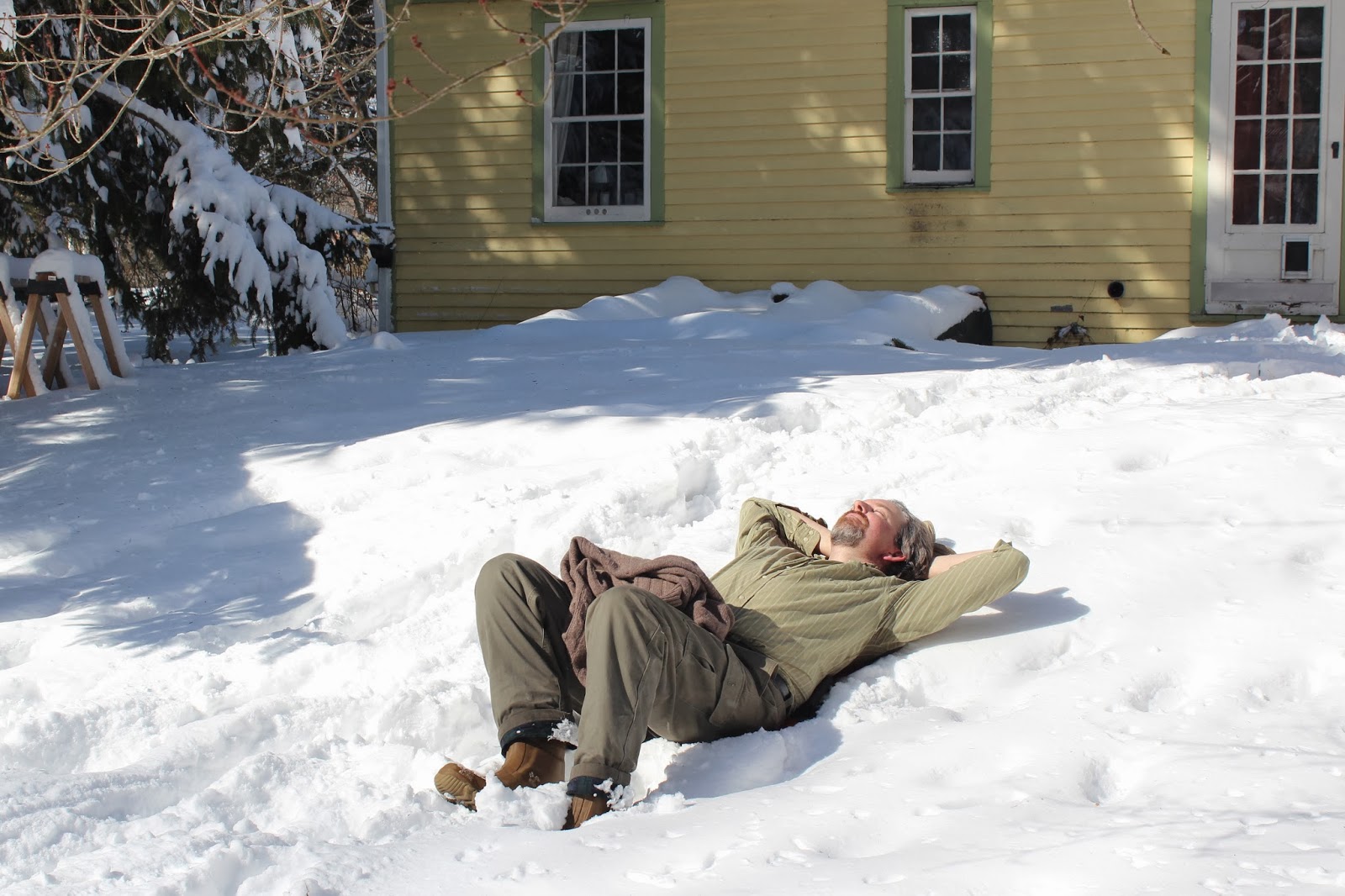 The wind occasionally sweeps down cascades of tiny, sparkling ice crystals, which fall upon my face and hands.  A downy woodpecker taps on a branch at the top of the tree.  Monica pops her head out and asks if I'm sunbathing.  She laughs and snaps a picture of me to show her sister in Costa Rica how we do things up north.  The sun feels so warm, but every breath is a little cloud of fog that the breeze takes away.  The tree is getting busier.  A half dozen goldfinches are at a feeder, a cardinal, a couple of juncos, a pair of blue jays pass through.  The wind is picking up and I see a glimpse of a fast hawk riding it southward.

When I lived in San Diego I would say sometimes that I missed winter, but people thought I was just being contrarian.  San Diego is a city made up of people who didn't like the winters back wherever it was they came from.

When I left southern California to spend a couple of years in the former Soviet Union, I thought the Russians at least would be a bit more stoic about the cold.  But it turns out that just as San Diego is as far south as US winter-haters can flee without becoming Mexican -- Almaty is as far south as Soviets can flee before the mountains rear up in a retaining wall of ice and snow.  Almatians are, for the most part, not lovers of the winter months.  They just haven't been as successful in their escape as San Diegans.

When I moved to Maine I found people who take winter in stride.  I suppose people who don't like winter have mostly moved to the San Diegos of the world or done themselves in in some bleak January.  The remnants who successfully live in the north seem to get out into what sun there is, and are not trapped by cold and ice . . . .

An upper branch of one of the trees drops a fist-sized clump of snow onto my chest, and I decide it's time to go inside.  Our mailbox was been knocked off by the snowplows and I need to rummage around in my shop for hardware to re-mount it.

Email ThisBlogThis!Share to TwitterShare to FacebookShare to Pinterest
Labels: Monica, musings, outdoors, photos
Newer Posts Older Posts Home
Subscribe to: Posts (Atom)
Do I contradict myself?
Very well then I contradict myself,
(I am large, I contain multitudes.)
----  Walt Whitman
"Song of Myself"