Can you keep up with the 8-year-olds?

At Nico's birthday party, 11 of them had to navigate the clues to find the treasure at the end . . .

The rebus told them where to look for the first set of scrolls: 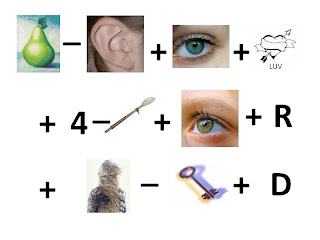 [Once there, they dug out:]

Your knees might see where the next clue hides,

If knees only had eyes and were able;

But you’d best have a seat, where you’re planning to eat,

Porter is a name that means gatekeeper,

and this time it’s he who holds the next key.

But he won’t just give it away.

By the pond you can hear what he’ll say.

He is hidden away in plain view.

He’ll tell you the goods that he wants from the woods,

and let you all earn the next clue.

Two sticks near the lake –

and 4 braided strands made of plants.

Who’s behind in finding clues?

Hurry up! you don’t want to lose!

You’re on Treasure’s tail, use your wits,

And look to where the birthday boy sits.

Are you scared of bears?

For he guards the very next clue.

But if you take care

As you reach into his lair,

He probably won’t bite you.

[Snatched from beneath the snarling bear head

mounted upon the wall:]

Whoever of you has a birthday in June

(or the farthest away from today!),

will have to ask en Español

because only Señora can say

where next clave is hidden away.

And ‘cause she’s muy stricto,

Or your treasure stays hidden away!

Have you ever seen the shape of an elephant’s foot?

Or that of a birthday cake?

Have you ever seen the belly of an oriole?

Or the belly of a ring-necked snake?

Put these clues together and you just might find.

That the treasure’s been in view this whole entire time!

a bright orange cylinder brimming with gems and jewels

Posted by Andy Brown at 4:44 PM No comments: