Porter says he wants to be an engineer – especially if engineering students don’t have to take as many English classes.  As I was writing yesterday’s blog post about (not) preparing ourselves for this civilization to hit the rocks, I was joking with Monica that we should set Porter up as a blacksmith, too --  (and that Nico’d make the better goatherd.)
Meanwhile, Porter was disassembling the robosapien that his grandmother gave him a couple of Christmases ago.  He seems to be planning a more elaborate and monstrous robot from it. 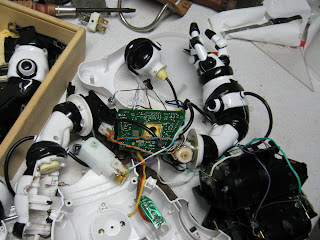 I set him and Jake loose with a handsaw trimming one of the maples.  It had some large limbs that were shading out the mulberry sapling and causing the cedar, elderberries and dogwoods to strain further and further out into the yard.  (They’ve swallowed up a portion of the clothesline.)  When the limb finally fell without injuring anyone, they were soon at it with hatchets. 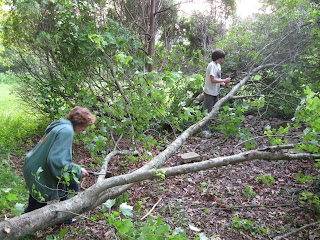 I couldn't find my ax.  I suspect the boys, but they insist that I never owned an ax otherwise they certainly would have remembered that.  Probably, they’re right.  I certainly never used it here. 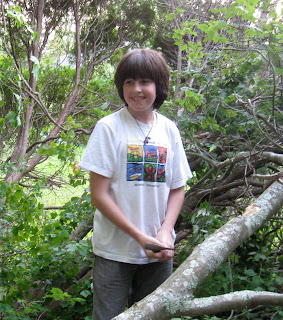 Posted by Andy Brown at 1:55 PM No comments:

Email ThisBlogThis!Share to TwitterShare to FacebookShare to Pinterest
Labels: photos, Porter
Newer Posts Older Posts Home
Subscribe to: Posts (Atom)
Do I contradict myself?
Very well then I contradict myself,
(I am large, I contain multitudes.)
----  Walt Whitman
"Song of Myself"