It's been a dry early summer, and so far - knock on wood - slugs have been scarce.  I've seen more toads in the garden than slugs, which could be a contributing factor, of course.

Garter snakes and other creatures have occupied the high hugel that I built out of deadwood, which is probably another reason I'm not seeing slugs.

This second attempt at hugelkultur turned out to be too high and awkward to cover up with dirt, so it's served as the place I toss weeds, hoping it would eventually collapse into something useful.  No sign of that yet and so this year I did put some wooden frames up top and filled them with soil.  Why stake tomatoes when I can just let them drape.  And I planted some squash plants there as well. 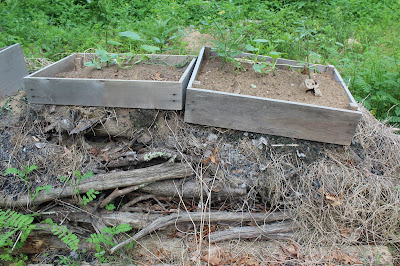 And resident garter snakes are just a bonus.  The great advantage of organic gardening is enabling predators to get established.  Poisons and other disruptions can wipe out pests, but they also wipe out the predators of pests, a gardener's natural allies.

And it's a fact of nature that prey species reproduce faster, adapt faster and establish themselves quicker than predators can.  Once you've used poisons, then you are committed, because the moment you let up, pests will invade with no predatory check on them at all.


It seems smarter to pick the pests off your plants and put up with some depredations, because soon enough their predators will pick up their part of the alliance, and things get manageable.

Some allies are more reliable than others, however.  The blister beetle larvae may have spent their days helpfully devouring the subterranean egg-stashes of crickets and grasshoppers, but soon enough they'll be adults chewing on the leaves of my potatoes and beets.

At the moment I'm only finding a few tortoise beetles and some three-lined potato beetles.

Posted by Andy Brown at 7:21 PM No comments:

Email ThisBlogThis!Share to TwitterShare to FacebookShare to Pinterest
Labels: garden, outdoors, photos, sustainability
Newer Posts Older Posts Home
Subscribe to: Posts (Atom)
Do I contradict myself?
Very well then I contradict myself,
(I am large, I contain multitudes.)
----  Walt Whitman
"Song of Myself"