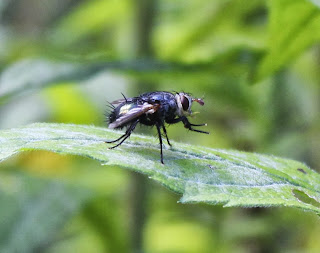 Here's an ugly little ally for the garden, a bristly tachinid fly.

There are over a thousand members of the family in North America alone.  Most of them plant their eggs in caterpillars, though I have no idea what species this might use as host.  It could also be making use of beetle or grasshopper larvae.  Tachinid species tend not to specialize, but be more opportunistic.

Technically, the larva of this fly would be considered a "parasitoid" rather than a parasite, since they kill off their host by eating it from the inside out.

It's not easy being a caterpillar.

And that put me in mind of Jack Handey's take on nature's miracles (via McSweeney's):

Posted by Andy Brown at 8:58 PM No comments:

Email ThisBlogThis!Share to TwitterShare to FacebookShare to Pinterest
Labels: garden, musings, outdoors, photos
Newer Posts Older Posts Home
Subscribe to: Posts (Atom)
Do I contradict myself?
Very well then I contradict myself,
(I am large, I contain multitudes.)
----  Walt Whitman
"Song of Myself"