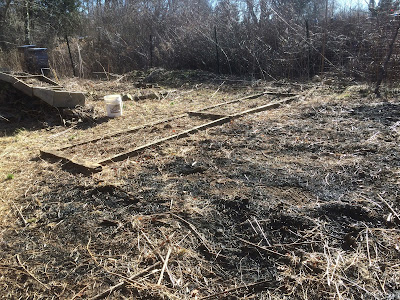 I didn't maintain a garden last year.  I was doing a great deal of traveling for work, and so the crown vetch had its way with it. I could claim to be practicing the age old practice of leaving one's plot go fallow.  The vetch, being a legume, is a nitrogen fixer and could be considered a good green manure and cover crop - and even a living mulch for those plants that grow up past it (like my asparagus and sun chokes).   In any case, I'll have to coexist with it somewhat in that it is thoroughly invasive, and basically impossible to eradicate at this point without resorting to herbicides.

Last year's growth covered the entire garden in a deep dry thatch, and since yesterday was a warm February afternoon Monica and I raked it up as best we could and burned most of it little by little on the main garden bed.  We kept an eye on the little flames as they crept around in the rest of the garden turning last year's weeds to this year's fertilizer.

The rhubarb is already peeking out, and since the ground isn't frozen I should harvest a bucket of sunchokes for pickling before they start to sprout as well.


I've been going to the gym lately, but as the weather warms it looks like my exercise minutes will be better spent preparing the ground for the superfluity of seeds that I've ordered . . .

Posted by Andy Brown at 3:59 PM No comments:

Politics: The Bad, Not-So-Bad, and the Almost Good.

It's now a month since Donald Trump was inaugurated into office.  Yet so far, damage has been limited by the administration's inexperience, incompetence and political isolation.  The ability of the Republican Party to take advantage has been hampered by its own awkward transition from a voice of wild criticism (insulated from consequence by supine journalism and Obama's veto pen) to a ruling party that has to put its money where its mouth is, so to speak.  The stumbling has been compounded by Paul Ryan's miscalculation that he could first and foremost take down the Affordable Care Act before his caucus woke up to the political dangers of stripping health insurance from millions of Americans in order to give millionaires a tax cut.  It must make it seem all the more ill-timed that Trump's attacks on the media have shattered the complacency of the courtier press and woken many journalists up to their historical role as check on (and fact-checker of) the powerful.  Given how unpopular many of the Party's core priorities are, the last thing they need is an assertive press insisting on truth-telling or accurate math.

Although gerrymandering and the Citizen's United ruling insulate most of the House from any real blowback, they can't be happy to see the body politic getting itself riled up about Republican mis-rule.  Even quiescent constituencies like scientists, spies and bureaucrats have bestirred themselves.

In this latest installment about politics in the twilight of American empire, I thought I'd lay out a few of the repercussions that strike me as interesting.

The vulnerable: Any political analysis today has to acknowledge that people are going to be hurt.  When it comes to the most marginalized, Americans wield their fantasies of meritocracy like a club.  We have set up a system that disadvantages certain people and then we blame them for their own lack of success.  Women, minorities, the young, the poor, the working class and so on, all swim upstream in the face of active opposition.  Now, our nation's worst tendencies of willful blindness, rationalization and cruelty will get free reign.  The message from on high - as they shred the safety net and whatever other protections and compensations we've managed to put into place - will be to blame the individual or to blame the Other, but don't blame the system or the powerful people who benefit from it, because that would be whining.

Attacks on immigrants:  Families who have emigrated here will be torn apart and made scapegoats for a system that was created and maintained by powerful, wealthy men.  These are men who bankroll our politics and who preferred to create and maintain an underworld of vulnerable "illegals" rather than a system of legal immigration.  It's a system successfully designed to lower wages and decrease organized labor's influence by creating a politically weak form of second-class citizenship - and drive a wedge into the heart of the working class.

Xenophobic Isolationism:  From a progressive perspective, creating, nurturing and maintaining connections between cultures, nations, religions makes us a stronger, more resilient society.  For a host of reasons, it also keeps us safer in the face of threats like international (or domestic) terrorism. In contrast, xenophobic propaganda, tribalism and withdrawal - which characterizes the Trump administration - does the opposite.  They will not only fail to make us safer, but they will use their failure (i.e. the next terror attack by a non-Christian, non-White) to consolidate their power.

The not so bad:

Populism:  The pernicious, unspoken consensus among the political class about "free trade," economic globalization and trickle down effects has been broken now that the population has been given the opportunity to weigh in on a rogue candidate.  Although Trump is a crony capitalist rather than a populist (while his inner circle is more nationalist), he rode American populist anger to power and that genie will be hard for the parties to put back into the bottle.  For better or worse, both are now more open to attack by populists of various stripes.

Political Action:  Before November, my main concern about political culture was that the American experiment in democracy and middle-class capitalism would die with barely a whimper and fade into idiocratic oligarchy or corporate rule, but it seems democratization and government by the people is back on the table.  Grass roots conservatives were already restive obviously, but the threat of unfettered Republican rule has meant an end to a complacent faith among progressives about Progress with a capital P, and activism is suddenly on the upswing.  It remains to be seen whether that will be sustainable or effective, given how much effort has already gone into removing the levers of power from democratic reach, but people are paying attention in a way that is new and potentially disruptive.

Re-Localization: There is a tension between local rule and state and federal rule.  Liberals embraced federal rule in part in order to overrule local and state preferences for racism, homophobia, patriarchy, environmental despoilment and so on.   Conservatives have resented being ruled by outside elites and liberals are waking up to find they like it just as much.  The current political flip opens to the door for a push among progressives for greater local control to pursue progressive agendas.  Given the fact that the federal government has shown little or no capacity to head off or solve the problems coming down the pipeline (including climate change, the end of cheap oil, economic de-growth, and winding down the US empire) it may be that our only hope of successful adaptation is to rely on a diversity of local approaches - rather than one organized from the top down.  I can't help but think that the sooner local democracy emerges from its current atrophied condition, the more likely we are to build more resilient localities.

But as the wise say, 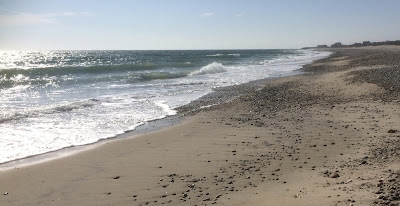 Posted by Andy Brown at 4:48 PM No comments:


After proving on this blog once again that prediction can be a sucker's game, I finished up my wandering around central Florida (where I was interviewing people on their attitudes about voting and voter suppression) and made a short trip to Atlanta.  I was talking to people about prostitution, sexism and feminism, but also walked in the city's huge and inspiring Martin Luther King Jr. march.  This and other research (on race and governance; fuel efficiency; economic security; ageism) kept me busy this fall and winter - circulating from Carbondale, Pennsylvania to Buckley, Washington; Pueblo, Colorado to Apopka, Florida; San Francisco to Chicago; Hickory, North Carolina to Chula Vista, California.

None of that enabled me to predict the ascension of Donald Trump, however.  I had felt the anger and contempt out there for the corrupted leadership of this country, and despair that the political class wanted to offer us nothing but more of the same.  But I thought the populace was still too conservative to elect such a transparent charlatan to tip over the apple cart.  I fully expected Trump to fail, but to pave the way for a less flawed populist. 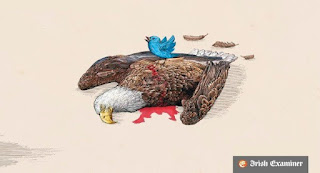 But here we are, with a pop-cultural punchline as our head of state and a radical Republican party with few if any of the traditional checks upon it.  Their first project - how to get away with stripping 20-30 million people of their health insurance in order to give the wealthy a tax cut - will tell us much about the type of republic we now live in.

But I promised predictions.

So, for that annual exercise in humility I will go out on a limb and predict a few specifics:

Looking back at predictions for 2016

Let's whisper this blog back to life.

I began a tradition of making January predictions - and looking back to see how inaccurate the past year's predictions were (which if nothing else disqualifies me from the ranks of the proper punditariat).

Shall we see how I did?

Nope.  It was far and away the hottest.
Yeah, no.  I thought the US electorate was too conservative to really bring someone in to tip over the apple cart.  I figured the status quo had another election cycle, especially given the flawed nature of the main Republican con artist.  But clearly the anything-but-more-Clinton animus won out among enough people.
Wishful thinking on my part.  Unashamed, America continues to imprison people at a rate that easily outstrips all other countries - no matter how despotic they aspire to be.
Not yet, though I still like that prediction.
Well, sorta.  It was demand destruction more than OPEC that kept oil prices below $50 - except for a couple of months when it flirted with $55.
Omar Mateen's massacre of gay men at the Pulse nightclub was the splashiest, but even more Black and Hispanic men continue to be incarcerated and murdered by police in a pattern of systematic terrorism.
Nope.
Nope.  $70 billion is being spent on ads to your computer and cell phone.
Well, on the last one - that we basically won't do anything to solve any of our big problems - turned out to be the solidest prediction.  And one that can clearly be recycled for the coming year.


Interestingly, faith in Progress turned out to be one of the year's biggest casualties.  Certainly among liberals, the ascension of Trump (and the murder of radicals cawing around his impending presidency) have been a bucket of cold water thrown on progressive assumptions about where this civilization was going.  The Trumpenproletariat, of course, had already seen Progress go off the rails as far as they were concerned.

The hive mind has become more consciously aware that something is amiss.
Posted by Andy Brown at 10:10 AM No comments: