_
The bees are here! 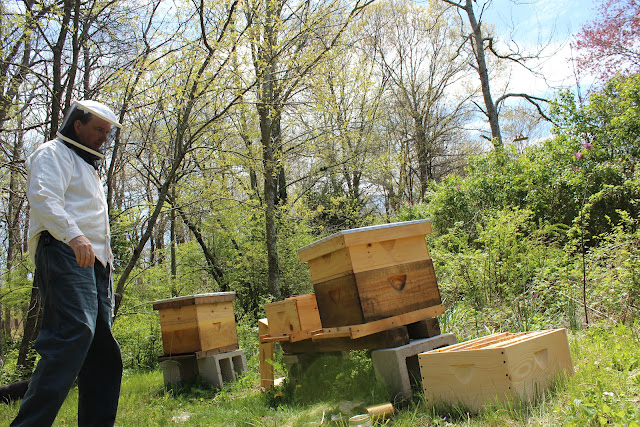 Some time in January, last years beekeeping experiment ended in famine and death for the bees.  It happens to even the most experienced beekeepers (especially in a mild winter when the bees don't go as dormant as they should), but I don't think my lot was ever even close to surviving.  The colony never got going after a late start, and the queen never produced enough brood to make a go of it.

This year I ordered 3 packages of bees from the Rhode Island Beekeepers Association, and picked them up on Saturday. 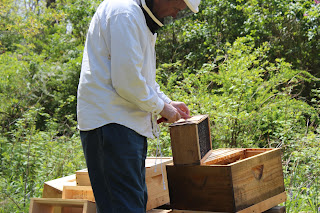 These swarms of bees were formed on Thursday, when bee breeders down in Georgia dumped 3 or 4 pounds of bees into each little screened box, inserted a fertilized queen (she's in a tiny screen and wood "queen cage" with a few attendants), then plugged up the hole with a feeder container filled with sugar water.  The artificial swarms formed around the syrup feeder as they all rode a truck up to Rhode Island.

Once you'v readied your hives, you pry open the lid and remove the feeding canister.  You remove the queen and make sure she is alive and moving around.  By now bees are swarming out of the box, so you need to get them into the hive.  For the first two hives I am using "deep" hive bodies and I could just set the whole open box into the hive alongside 5 (of the ten) frames of honeycomb and comb foundation.
For the third hive I'm using "mediums" and there is not enough room for the box, so I had to shake out all the bees into a pile in the empty hive and then set the frames in on top of them.  The frames settle down and into place as the bees distribute themselves out from under. 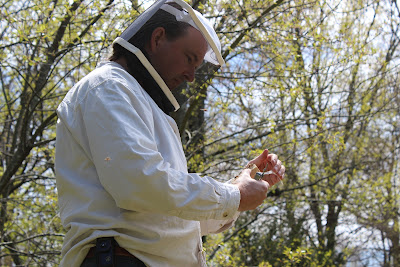 The queen is trapped in her cage by a plug of candy, which is in turn capped with a cork.  Once you remove the cork, the bees begin to eat their way into the queen cage.  The reasoning is that by the time they get through (in a few days) they will all be familiar with one another and these bees will have accepted this new queen as their own.

With a thumb tack I fixed each queen in place between a couple of frames.  Then I placed on the "inner cover", which has a hole in the middle.  I had made sugar feeders out of mason jars, and I inverted one of those over each hole.
Then the outer lid goes on and you leave them to fuss and fret and figure out where they are. 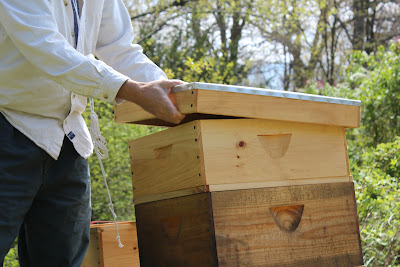 Mom and Dad came up from Pennsylvania for Grandparents Day at the boys' school and visited for the weekend.

And although Dad's still stuck in a wheelchair with his broken leg, they came out for the hiving of the bees. 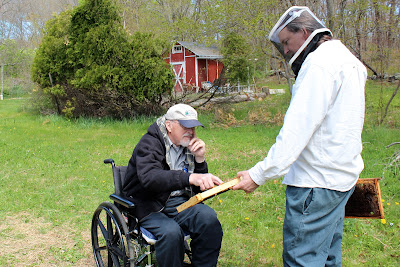 Posted by Andy Brown at 5:05 PM No comments: