Attack of the margined blister beetles 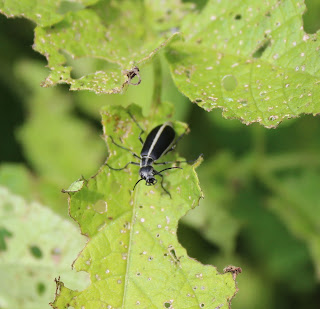 I have not been a good gardener this summer. There's no getting around it.  It's been hot, I've been distracted, and the weeds have been prolific and persistent. 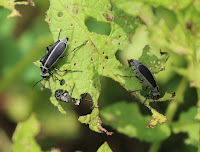 (My best crops have been vetch, wood sorrel, sedge and lamb's quarter - though at least that last one is delicious.)

Still, after neglecting things for yet another week in this past heatwave I was pretty appalled to see what the blister beetles had done to the potatoes.

I have written about these beetles before.  They're regular visitors, and I'm perfectly happy to tolerate some of them, because their larvae devour grasshopper eggs.  But when they swarm, they do have to be picked off or they'll chew the leaves down to the stems and make a frassy mess of things.  And they'll move to the beets if they have to. 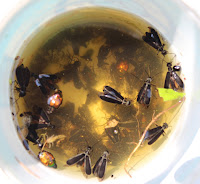 The blister beetles contain levels of the poison cantharidin sufficient to raise blisters if you accidentally crush one - or to kill a horse if they eat infested hay.  (In low doses it was the semi-toxic irritant of the old aphrodisiac, Spanish fly - which was made from pulverized beetles of this family.)

I noticed that bugs die quickly in this tea.  I wonder if it has any potential as an insecticide or herbicide.  After it has set in the sun for awhile, I poured it out onto some sulphur cinquefoil just in case. 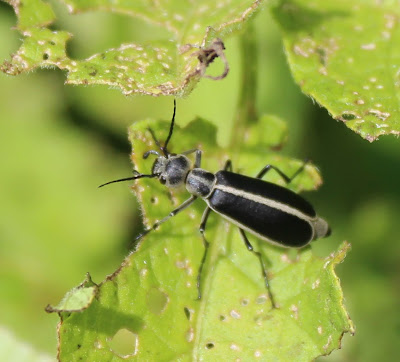