Every fall, at the end of September the Nature Center in Mystic puts on a Wild Mushroom Festival.  The local mycologists all bring their foraged samples to show off.  They spread them all out upon a long table -- poisonous or edible, from giant frills and volleyball sized puffballs to dainty parasols of orange, white brown or purple -- dozens of varieties of fungus that can be found in the local woods and pastures.  The experts and mushroom stalkers, many of them wearing their best fungus-themed sweatshirts and t-shirts, answer questions and compare notes with one another. 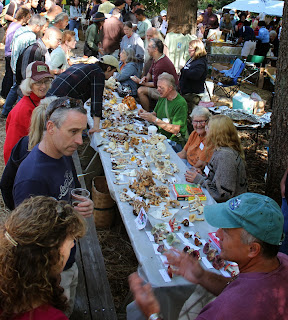 Restaurants bring their hotplates and chafing dishes to serve up samplings of wild mushroom dishes -- risotto,  sauces, canapés, and soups.  One restaurant grilled traditional, flint corn johnnycakes with oily mushrooms dribbled upon them.  Another had concocted a bread pudding.  The Mystic Drawbridge ice cream makers brought ice cream made from candy cap mushrooms that tasted like maple syrup.

A small band played sets of roots music (mycelium music?) under the eaves of the Nature Center building.  Monica was working in the drink tent, serving out wine, beer, cider and blackcurrant juice.  Nico hates any taste of mushrooms, so he munched on the bread that was meant to be soaked in gravy.  He warned his friends to not be fooled into eating any of that ice cream.

I had him lead me on a hike back through the woods of the nature center.  He knows them better than me from years of Monica working there and going to camp and outings there.

I've always wanted to know my way around the mushrooms better.  Around our house we get our handful of morels in the spring as the asparagus first sends its spears up.  Otherwise, we have stinkhorns, amanita, cups and puffballs, but nothing else edible.  One of the most sought after fungi locally is hen-of-the-woods.  It grows back in the woods beyond the stone wall, but I think savvy locals usually get to it first.  The neighbors have shared some with us in the past, fried up in butter with black pepper.  Maybe I'll go have a look tomorrow, just in case. 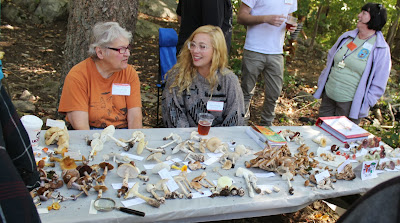 Email ThisBlogThis!Share to TwitterShare to FacebookShare to Pinterest
Labels: food, outdoors, photos
Newer Posts Older Posts Home
Subscribe to: Posts (Atom)
Do I contradict myself?
Very well then I contradict myself,
(I am large, I contain multitudes.)
----  Walt Whitman
"Song of Myself"