After work, the boys and I headed to the CSA to pick up our loot of green beans, fennel, mescaline mix, summer squash, carrots and tomatoes. Monica was off tenting with her campers at Green Falls, so instead of coming home we swung by Ninigret beach to play in the surf. Crushing waves, roiling sand, and tearing rip-currents made for an hour of death-defying family fun. We survived, and returned wearily home, silty, salty and sand-scuffed. While we washed ourselves up, Alberto heated rice with yesterday's pork and potatoes. The boys ate up every bite.
Posted by Andy Brown at 8:26 PM No comments:

Email ThisBlogThis!Share to TwitterShare to FacebookShare to Pinterest
Porter and Nico's friends Jacob and Philip are heading off on Saturday to the Czech Republic for a month to circulate with their two sets of grandparents. But first, they wanted to get together for a sleepover. Monica swept them up on her way back from Nature Camp, came home, and cooked up her famous roast. (This is a roast that has been an epiphany for more than one person and which everyone should taste before giving up on pig-meat.) We all feasted on baked red potatoes, pork and applesauce, then the boys rampaged outside until it was too dark to see. They came in comparing pop-cultural notes about the TV and movies and video games they've managed to cram into their summer so far and then headed to the basement to set up an elaborate Heroscape scenario. I made sure they all had sleeping mats and sleeping bags. Then they pretty much look after themselves and sleep as little as their young bodies will allow.
Posted by Andy Brown at 11:52 AM No comments:

The levy along the Pawcatuck river where the Grills Reserve trail runs has become a narrow causeway, with only a foot or two of clearance above the water. Vernal pools are over-flowing and parts of the flooded woods look as though gators and anacondas should be slipping between the tree trunks and drowned thickets. Frogs hopped out of my way. As I strode down the trail each backward swing of my arm struck the little mosquito bodies that followed me in a trailing cloud. I walked as far as the old bridge ruins, but there the river had recently spilled over the trail. I might have been able to pick my way through the puddles and pools and rivulets, but not nearly fast enough to keep the mosquitos at my back.
Posted by Andy Brown at 8:15 PM No comments:

In 1952 my grandmother, Marian Metz Brown, hosted a reunion for all the descendants of her grandfather, Samuel Metz -- that is, her own family and the offspring of her fourteen aunts and uncles. It became an annual event and when her son, my uncle Fred, took over the farm he inherited the reunion as well. Now my cousin acts as host each year on the last weekend of July. And for nearly sixty years the clans have reconvened on the Brown farm in Airydale, Pennsylvania.
This past Saturday, over 220 relatives and friends gathered at Scott and Emily's farm in Big Valley for the great potluck. More would trickle in from around the valley for the barn dance. When I was a kid the two signposts of the year were Christmas and Reunion. And now it's Porter and Nico's turn -- and Lydia and Eric and Jacob and Lauren -- and Bridget, especially once she gets mobile.
You basically catch them on the fly once or twice to make sure they eat something -- otherwise they're off. (It was sad thing this year that Nico had a stomach flu and slept through most of it.)
Posted by Andy Brown at 9:37 PM No comments:

Around the office we're getting cognitive whiplash. As projects stretch on into the summer, from minute to minute, we're snapping our minds from one issue area to another. Today I had to write about or sift data about or otherwise contemplate the following:
Convincing Alabamians to support licensure of daycare centers;
Inoculating the public against a "lurch to the right" every time there is a terrorist threat with a progressive model of counter-terrorism -- so talking with Americans about torture, detention, profiling and surveillance;
Testing whether the Obama administration is changing people's thinking about government;
Looking for ways to show Ohioans the value of public support of fine arts;
Writing up findings about the best ways for environmental groups to talk about Global Warming;
Getting people to notice economic policy and think about the positive role that the government could play in a well-run economy.
Time for a mental neck brace.
Posted by Andy Brown at 8:03 PM No comments:

The little red-mulberry tree is a little tattered -- with more than a few branchlets broken and wilting -- and stripped mostly of the berries. I'm sure it was the raccoons. Squirrels are too light to break the branches and what other heavier marauder would claw and clamber around in bent and breaking twigs for a few mouthfuls of mulberries?
Posted by Andy Brown at 8:25 PM No comments: 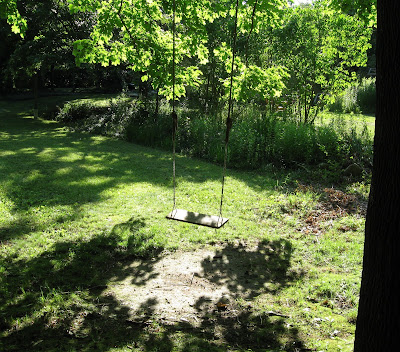 Posted by Andy Brown at 8:58 PM No comments: 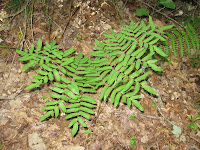 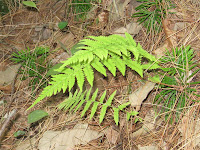 I hiked in the woods beyond the back fence -- pushing grasping greenbriar out of the way with my chestnut walking stick.
I was noticing the ferns and trying to train my eye to distinguish one from the other.  Little white moths rose up around me with each step. 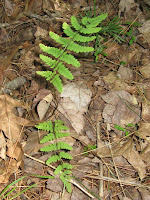 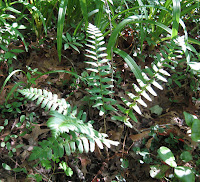 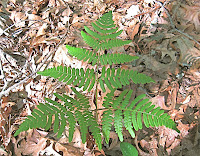 I fancied myself wizardish -- with my staff, broad brimmed hat and my coterie of half a hundred flickering moths. 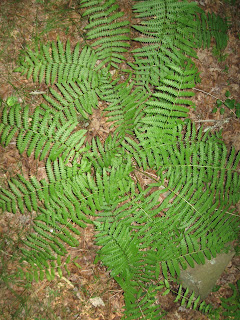 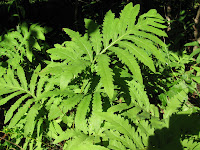 Posted by Andy Brown at 6:40 PM No comments:

The boys and I spent the week leading up to July 4 at Lake Como, while Monica returned to Rhode Island to settle into being a camp counselor.
I telecommuted to work.  (I was dismayed to find that the new Macbook lacks a modem, so a couple of times a day I had to bike down to the ice cream shop in town to use their wifi.  Usually the boys came along and I bought us a meal or a snack.)  It was a cool, wet week -- not socked-in rainy, but every day there were showers interspersed with sun.  Into the 40's at night and the 60's during the day.  Porter tried fishing a little and we took the canoe out.  They read a lot, played games, biked, built and re-built the Heroscape gameboard, and bided their time until their aunts and grandparents arrived on Friday.
During the week, I noticed how Porter has been growing lately -- becoming more self-sufficient -- more self-contained.  Bicycling off around the Lake; helping out with meals; even going off to the Villa Como by himself for a piece of cheesecake and a game of pinball.  When Chris, Cathie, Mom and Dad came up for the weekend, he and I took turns lighting the fireworks that Chris had brought.
I was proud of the way that both of the boys handled themselves in the canoeing upset.  Neither panicked.  When I saw Porter float away from us in the Delaware, I knew that he was a good swimmer and he would be making for the shore.  And afterwards I could tell that he had added to his own stock of self-confidence -- that he was a little surprised and even impressed at how he had mastered his own fear and panic.  And how he hadn't looked for anyone to rescue him.
Posted by Andy Brown at 4:20 PM No comments:

My father and sister took the green fiberglass canoe; Porter, Nico and I the battered aluminum one.  The plan was to paddle and float 18 miles down the Delaware River from Buckingham access to Calicoon – or failing that, to quit at Hankins after 12 miles.  It was a gorgeous day and the river was high.  It was the day after the 4th of July, but the river was running like it was early May.  A bald eagle flew low up along the river as we unloaded the canoes.  It was a misleadingly happy omen for a trip that was going to end in disaster.