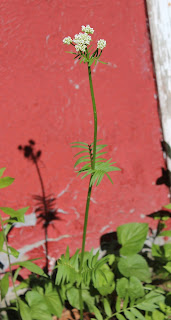 From the start of our time here, I'd noticed a pretty weed in a couple of spots around the yard.  The glossy, but unfamiliar green leaves made me think that it was probably an ornamental.  Given the chance, deer would chomp off the flower heads, which made me suspect maybe it was a native plant.  But lately I'd also noticed that it was starting to spread, so I enlisted my sister (who's good with wildflowers) to identify it for me in case it was some invasive that I'd regret allowing to get established.

It turned out to be Valerian - one of the great herbs of the ancients.

By the time of Hippocrates it was already well known as a cure for insomnia and depression - a status that modern science has validated in its turn.  The foul smelling root is dried, ground and made into infusions -- (or in modern times placed into less-foul-smelling capsules).

It's also valued by gardeners as a source of phosphorous for the compost heap, since the plant draws up and concentrates the mineral in its tissues.

I may dig up and dry some roots as a way of getting my herbal apothecary's toolkit underway once again - (if only to see if it's as bad smelling as reputed).  We used to keep a medicine cabinet of herbs when we lived in San Diego, but got out of the habit when we moved away.  And I guess I'll also make a point of throwing the leaves and stems into the compost along with all the nitrogen-rich vetch the garden's been generating.  I'm sure the garden soil can use the help.