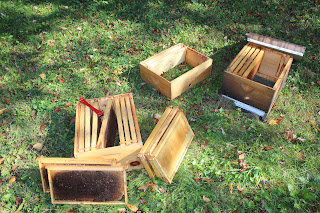 Rusty at Honey Bee Suite puts up a valuable post on the problems of genetics for honey bees.  The species is under severe environmental stresses, including the invasion of varroa mites (since 1987) and the introduction of a new class of pesticides, neonicotinoids, that science shows contaminate destroy colonies wholesale.  Unfortunately, as with so many other domesticated species, industrial agriculture has ruthlessly pared the gene pool down by disregarding all but one or two money-making traits -- in this case, honey production.  Rusty notes:

The lethal combination of mites and viruses quickly killed off most of the feral colonies in North America, removing a critical part of the honey bee gene pool. No longer able to find sufficient wild bees, beekeepers were forced to import bees from elsewhere. As a result, most of our managed colonies have been raised from production queens that, by definition, have a limited supply of genes.
. . . To meet the demand for replacement colonies, queens are produced in large quantities in the south and shipped all over the country . . . [But] there just aren’t that many genes to pick from anymore. As a result, the exhausted gene pool was spread from sea to shining sea.
And it gets worse. You and fifty other beekeepers in your county have bees with nearly identical genetics simply because everyone in your local bee club bought bees from the same producer. They all arrived in one truck, so in addition to having the same genes, they have the same diseases. It means the drones hanging out in your local drone congregation area have the same genes as well. So if you are trying to raise your own queens to overcome a shallow gene pool, the odds are stacked against you from the start. It’s one heck of a mess.

Genetic diversity is the key to any populations ability to adapt biologically,  and bees are teetering.  Ideally, I would find colonies that were survivors and breed my own queens to local conditions, but that is easier said than done -- especially for someone who is only beginning to learn the craft.  I'm 0 for 4 when it comes to over-wintering colonies, and this year again I will have to purchase bees from the breeders in the south.  If I can manage to establish colonies I will re-queen them with Purvis Gold or some other non-standard genotype, if only to break out of this vicious cycle of decline.