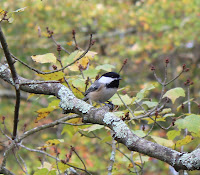 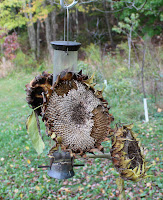 A frost was creeping in Friday night, hard enough to murder nasturtiums and nudge the trees to shed their leaves.  So, I transplanted basil, thyme and chives to a pot, stuck in a few cilantro seeds and placed it on the kitchen windowsill for winter herbs. I put a cold frame over the habanero in hopes that it might still ripen a few chiles.

Only the beets and parsnips look happy.  I pulled up two handfuls of the beets for borscht, and dug the last half-row of potatoes.  The few turnips in the ground had turned to an odorous, gelatinous goo.    Carrots had been poorly, and half-heartedly planted in drought and never amounted to much.  Instead, I had let purslane and a couple of stray stalks of lambs quarter spread and mature - two weeds that are good for eating.

Nuthatches, chickadees and titmice had already been working on the sunflowers, but I cut off the tops and stuck them in the bird feeders outside the kitchen so we could watch.  The cat was most entertained. 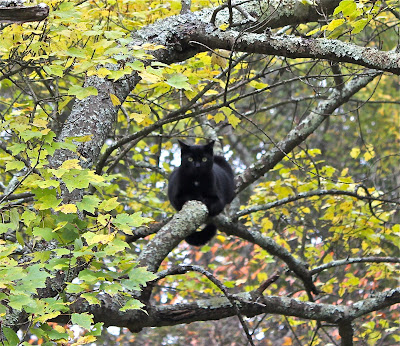