Death among the parsnip flowers

Here's a welcome creature nectar-sipping at my parsnip flowers.
Trichopoda pennipes, called the feather-legged fly.
Another bane for garden pests.

Drawn in by blossoms of the carrot family,
she'll stay to hunt the squash bugs.
FInding one unwary, she'll lay an egg or two beneath its plated abdomen.

A hatching larva will burrow in and set to drinking up the tissues of its host.
A happy maggot soon bursts the carapace of the victim bug,
leaving it to die.

But in the meantime, this feather-legged fly had best beware,
Because among the florets lurk those thirsty eight-legged killers. 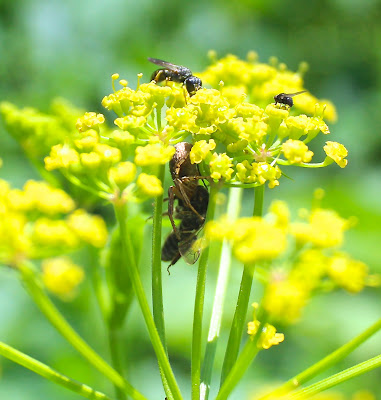 A spider has snagged an unwary wasp and drinks.

But this gorging huntress had best beware,
because orange-marked spider wasps
(Arachnospila)
are in the parsnip flowers and they have eggs to lay. 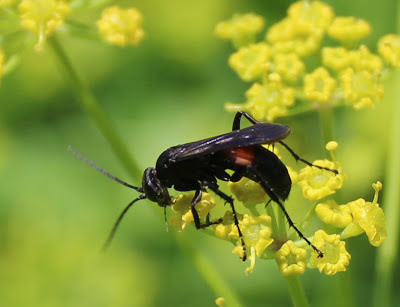 She'll sting a spider with a paralyzing venom, and drag her off down snugly to a burrow,
where she will lay a single egg within the body.
Sealing off the burrow, she'll fly away to hunt again and drink of flower nectar.

And the grub, hatching in the dark, following its instinct will eat around the crucial organs,
because the spider, after all, is still alive,
and it wouldn't do to have it die and rot before the wasp is ready to emerge.

But even in that spider flesh, the larval Arachnospila had best beware.
For there are carrot wasps among the parsnip flowers.

She drinks the vanilla'd nectar of the flowers now,
but soon she'll want to lay her eggs.

Needle-like she cannot sting - that spike has other uses.

A wasp or solitary bee has a hidden stash to feed its young -
perhaps a buried, living, grub-infested spider.
She finds that stash
and that long spike slides down the burrow and leaves a solitary egg.

Her invading grub may eat that spider and if it can, a burrow-mate as well. 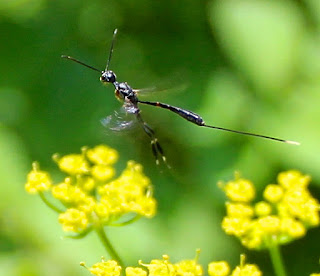 (On what basis do you expect to find this universe in the hands of a
benevolent god?)

Follow the links for more on the feather-legged fly, spider wasps,  carrot wasps.  The fly pictured, by the way is a male.  The female has the same orange abdomen, but with a black tip.