Chipping at the foundations of democracy: journalism edition 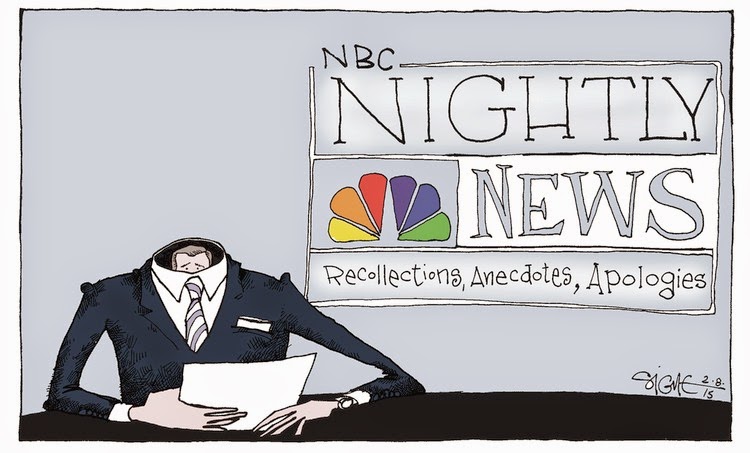 I haven't really been following the story about Brian Williams and whether he did or didn't embellish his experiences in the field as a reporter. Since I prefer information less corporately masticated,  I don't get my info from the TV.  The cult of on-the-spot tele-anchor reporting is more theater than journalism in any case.  But I do find the high-profile discrediting of a prominent figure of journalism to be a depressing spectacle.

It has little to do with Williams - who is probably a perfectly fine man.

It has little to do with the many bad habits of television and television news.

It has to do with discrediting the institution of journalism, so that its ultimate demise is mourned by no one - right, left or center.

The corporate takeover of the news media has overseen the diminishment of reporting across the country.  The decline in quality and independence and diversity - the decline in staff - the decline of journalism as a profession.  It has been a stunning destruction of the media as the Fourth Estate.

At one level this is part of the larger crisis of democracy as a form of political organization.  If anyone is going to look after the common good, we need sources of information and analysis that go beyond the press releases of the powerful.  (The first amendment of the Constitution acknowledges a "free press" as a bedrock institution of the republic.)

Unfortunately, this pattern of mismanaging, dismantling and discrediting isn't confined to news departments.

Look at the institutions or practices that (when functioning) contribute to actual democracy, and you'll see we're in the end game of a long, concerted effort to destroy and (even more insidiously) to discredit them and make them unusable:  public education, government, labor unions, science (as source of publicly available knowledge), the arts, taxation and so on.

Compare the institutions that lead in the other direction - military, police, the prison-industrial complex, courtier-journalism, science (as source of technologies of control), corporate consolidation, the legalization of political corruption, and so on.  All of these are being actively developed into the foundations of our society.

It is convenient for the powers that be that regular Americans be isolated from their own democratic power, and that institutions which could serve to enable collective self-organization and action be not only broken, but seen as unworthy of repair. 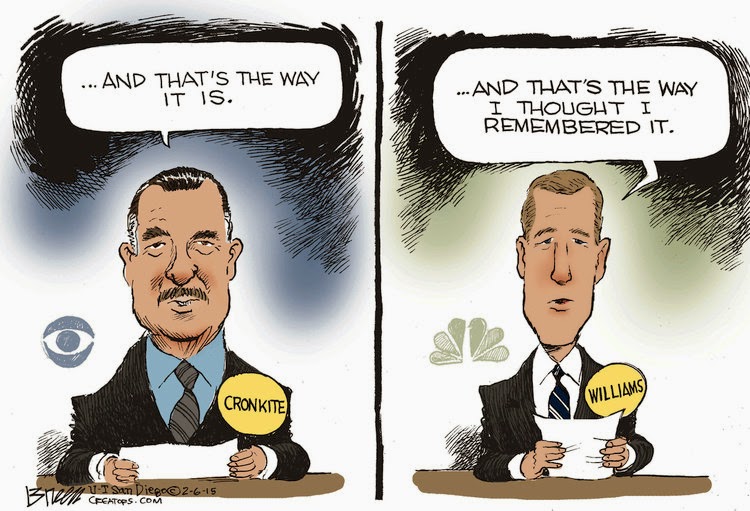 The constructive power of journalism has been to give people a better opportunity to see what is actually happening in the world - as distinct from the proclamations and propagandas of the powerful.      From the muckraking of Upton Sinclair, the bloody imagery of Vietnam, the embarrassment of Watergate or Abu Ghraib, such information can galvanize people to challenge the status quo or insist on something more in tune with the common will.

But when journalists are viewed as nothing more than spin doctors, entertainers, mouthpieces, stenographers, or unreliable celebrities - we lose access to an important source for a shared, credible picture of what is happening.  That's why I find the taking down of Brian Williams to be a sorry spectacle.  Because whatever the merits of the case, it is yet one more reason for people to give up on the idea that news media can be and ought to be a reliable source of information about what is really happening.

I don't think things are a lost cause, but I do think Americans are on the losing side of a intra-societal war that they are only dimly aware of.  And it is one they are very clearly NOT being informed about . . .

Posted by Andy Brown at 1:10 PM 2 comments: Links to this post

Email ThisBlogThis!Share to TwitterShare to FacebookShare to Pinterest
Labels: media, musings, politics
Newer Posts Older Posts Home
Subscribe to: Posts (Atom)
Do I contradict myself?
Very well then I contradict myself,
(I am large, I contain multitudes.)
----  Walt Whitman
"Song of Myself"